Matthews was sentenced to one year in prison, reduction in rank to E-5, and given a bad conduct discharge, although the punitive discharge could be lessened if he testifies against the other service members involved in the case and Melgar’s family approves, according to Navy Capt. Michael Luken, the military judge overseeing the case.

Melgar died on June 4, 2017, when Matthews and three other U.S. service members hazed him with the permission of Melgar’s team leader.

In an emotional address to the Norfolk, Virginia court, Matthews took responsibility for Melgar’s death.

“On June 4, 2017, the Navy expected me to lead,” he said. “I have carried the weight of Sgt. Melgar’s death every minute of every day since that night in Mali.”

“This was my fault,” he later added. “I humbly accept whatever punishment you think is warranted.”

The incident that set events in motion that led to Melgar’s death happened the previous evening, when Melgar was supposed to escort two Marines to a social event but allegedly left them in an unknown part of Bamako, Matthews said. 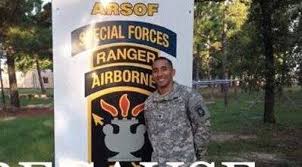 Before they acted, they cleared the attack with Melgar’s team leader, Sgt. 1st Class Jamie Morris, he said.

Matthews admitted that he and three other service members and a British special operator broke into Melgar’s room to duct tape Melgar and “embarrass” him by videotaping the hazing, said Matthews, who added that, “taping is a form of remediation in the special warfare community.”

While DeDolph held Melgar in a choke hold, Matthews helped bound his ankles and then wrists, Matthews testified.

Matthews said he thought Melgar would be placed in a blood choke, restricting blood flow to his head, not his airway.

But after three to five minutes, Melgar stopped breathing.

He wept as he said that Melgar “tragically passed away” of asphyxiation.

Although Matthews initially tried to hide Maxwell and Madera-Rodriguez’s role in the hazing, he said he ultimately decided to cooperate with the investigation.

“I cannot describe how sorry I am for the death of Staff Sgt. Melgar and the pain I caused by impeding the investigation,” Matthews said. “I am truly sorry.”

Melgar’s wife Michelle replied that the pain she has felt since her husband’s death has been “suffocating,” yet she said she felt sorry for Matthews and his family, adding, “I forgive you.”

Melgar was always enthusiastic on his deployments until he went Mali, his wife Michelle testified.

For the first time in his career, Melgar told her that he wanted to come home, indicating that he was having problems with his SEAL counterparts, whom he said were acting immaturely.

But Melgar’s mother Nitza said she could not forgive Matthews.

“You, sir, are a murderer. Logan’s blood will never wash off you,” she said. “You are a disgrace to your Purple Heart. May God have mercy on your soul.”

“You stole him from us. When Logan died, we all died, and I really wish you were going to prison for the rest of your life,” she added.

The SEALs belong to the Navy Special Warfare Development Group.

The unit is better known as SEAL Team 6, which participated in the May 2011 raid that killed al-Qaida leader Osama bin Laden at his compound.

Melgar, who was from Lubbock, Texas, served two tours in Afghanistan.