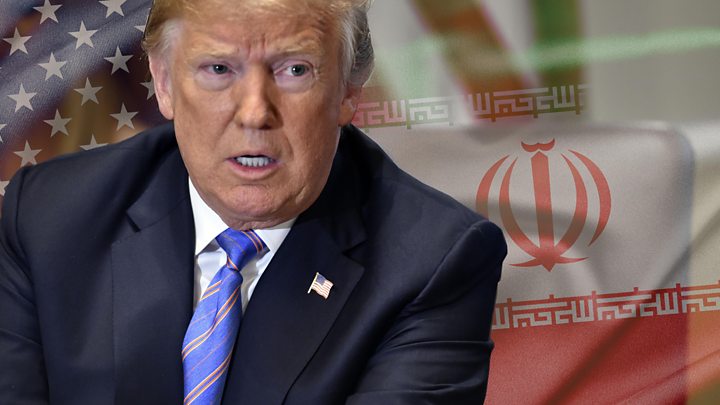 Donald Trump understands the basics about presidential politics. At the top of the list, wartime presidents are always reelected. Even George W. Bush, as unpopular as he was in 2004, earned a second term as the war in Iraq waged on.

So it should give every American pause today as the beat of the war drum gets louder regarding Iran.

Today, Secretary of State Mike Pompeo made a lightning visit to Baghdad to show U.S. support for the Iraqi government as Washington steps up warnings to Iran against any action against American interests in the Middle East.

The unannounced trip began and ended after nightfall and under heavy security.

Pompeo’s visit came as the Trump administration is intensifying its pressure campaign against Iran.

There has been little to no effort by the Trump team thus far to deal with Iran diplomatically.

The U.S. said this week that it is rushing an aircraft carrier group to the Middle East to deter or respond to any Iranian attack.

U.S. officials have said there are indications Iran is planning to retaliate for the Trump administration’s stepped-up sanctions on the country, although the threat information remains vague.

On the way to Baghdad today, Pompeo told reporters he would meet with Iraq’s president and prime minister to show them what he said is U.S. support for “a sovereign, independent” Iraq, free from the influence of neighboring Iran.

He said he would also discuss with them unfinished business deals that he said would allow Iraq to wean itself from dependence on Iranian energy.

Pompeo would not be specific about the more recent threat information involving Iran, but said he would make the point in his meetings in Baghdad that any attack by Iran or its proxies on American forces in Iraq would affect the Iraqi government too.

The “campaign to continue to prevent ISIS terror inside of Iraq itself is something that’s very central … to the Iraqi government,” Pompeo said.

As tensions rise between Washington and Tehran, Baghdad in some ways is caught in the middle.

Iraq has a close relationship with the U.S., which is leading the international coalition in the war against the Islamic State group in Iraq and Syria.

But Iraq is also tightly enmeshed with Iran in trade, security and political matters, and it has been loath to antagonize its larger neighbor.

Iran won the ear of many top Iraqi politicians after it stepped in to fill the political vacuum following the 2003 U.S. invasion.

It also can count on the loyalty of several powerful Iraqi militias, which have fought previously against U.S. forces in the country and on the side of Iran’s allies in Syria in that country’s civil war.

The Trump administration has made several recent moves to squeeze Iran.

In a stunning Sunday statement, National Security Adviser John Bolton announced a military move by the US in response to what it says are Iranian threats.

“In response to a number of troubling and escalatory indications and warnings, the United States is deploying the USS Abraham Lincoln Carrier Strike Group and a bomber task force to the US Central Command region to send a clear and unmistakable message to the Iranian regime that any attack on United States interests or on those of our allies will be met with unrelenting force. The United States is not seeking war with the Iranian regime, but we are fully prepared to respond to any attack, whether by proxy, the Islamic Revolutionary Guard Corps, or regular Iranian forces,” read the statement.

Acting Pentagon chief Patrick Shanahan added his own warnings the next day, saying the decision to send those weapons to the Middle East “represents a prudent repositioning of assets in response to indications of a credible threat by Iranian regime forces. … We call on the Iranian regime to cease all provocation.”

Last month, Trump announced the U.S. would no longer exempt any countries from U.S. sanctions if they continue to buy Iranian oil.

The U.S. also designated Iran’s Revolutionary Guard as a terrorist group, the first ever for an entire division of another government.

Trump withdrew from the Obama administration’s landmark nuclear deal with Iran in May 2018 and, in the months that followed, re-imposed punishing sanctions, including those targeting Iran’s oil, shipping and banking sectors.

No wartime president in America has ever been defeated.