What Would It Take For Republicans To Drop Support Of Trump? SNL Poses Scenarios 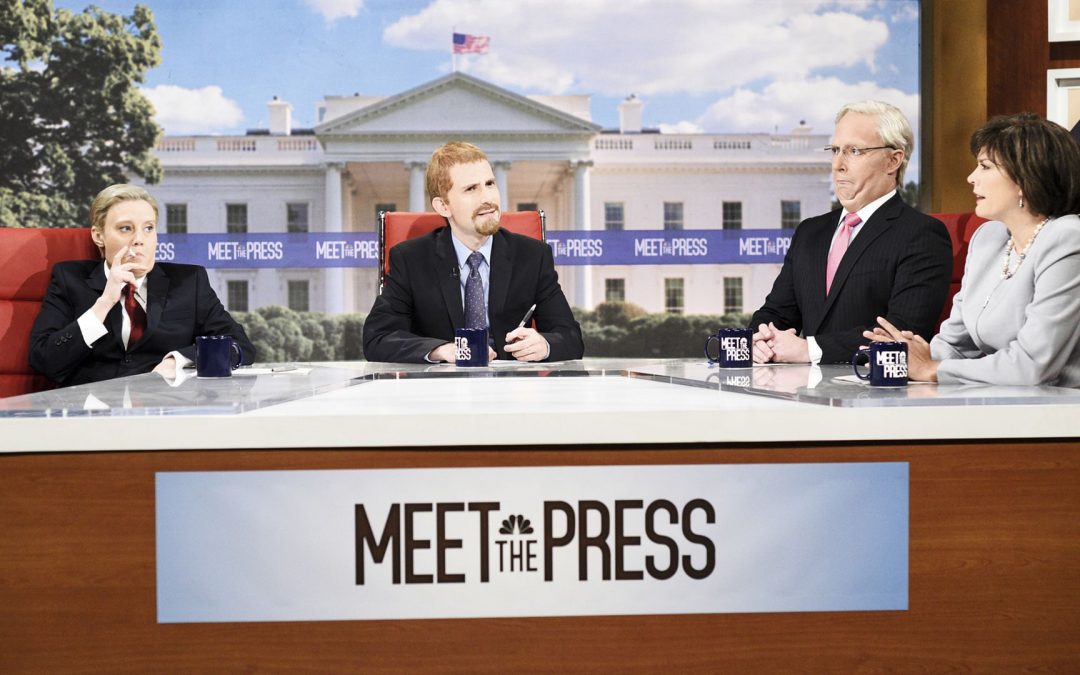 A hilarious Saturday Night Live segment featured Chuck Todd (portrayed by Kyle Mooney) interviewing prominent Republican senators on Meet The Press, and trying to get an answer to this question: What might cause them to end their support of President Donald Trump?

It was slim pickings.

“This week, President Trump has escalated his trade war with China,” said the fictional Todd, referencing the failed US/China trade talks and a new 15 percent increase on tariffs for certain Chinese goods. “It’s estimated that this will cost the country $1.4 trillion in market value. Now, you all have opposed tariffs in the past — but you all support the president’s tariffs now.”

“Okay, but I’m asking you about China,” Mooney’s Todd responds.

“Let’s try Lindsey Graham,” Todd says. “After opposing tariffs for decades, why do you suddenly support them from President Trump?”

Kate McKinnon’s celebrated Lindsey Graham character answers by satirizing a defense many conservatives have used when confronted with reports of Trump reportedly having lost quite a lot of money in his businesses ventures.

Essentially, the president’s defenders claim the scale of the losses and Trump’s ability to survive them (and to apparently use them to his benefit with the IRS) actually makes him a brilliant executive.

“Chuck, listen, when you have a president who’s a financial genius — and a business Jesus — like Donald Trump, you’ve just gotta trust him,” McKinnon says. “This man has lost 100 times more money than I have ever made!”

Cecily Strong, as Sen. Susan Collins (R-ME), presented a caricature of someone perpetually concerned about Trump’s actions, who fails to take any steps towards thwarting his ambitions.

“Chuck, I’ll be the first to admit that some of the things this administration is doing make me want to shake my head vigorously, and wag my finger once — perhaps twice,” Strong’s Collins says.

Seemingly at a loss, Todd announces a new lightning round: What would it take for President Trump to lose your support?

”Well, you just bring it on, Chuck. Because if you think Susan Collins is a pushover, well then, you’ve — ” Strong says, finishing her answer by curling up in a mass of unintelligible mumbling.

What if Robert Mueller were to testify before Congress, and state under oath that Trump obstructed justice?

McConnell has an easy answer: “Well, we need a leader that’s willing to do what he’s gotta do to win.”

Graham chimes in, as well: “That’s absolutely right. See, the best way to uphold the law — is to be above it, Chuck.”

What if Mueller said that Trump indeed colluded with the Russians in the 2016 election?

“Well, I’d have to write a strongly worded email, and send it straight to my draft folder,” Collins says.

What if the president admits that he’s not as religious as he claims?

“Haha! Well, if you don’t already know that, that’s kind of on you, Chuck!” McConnell responds as he laughs.

Todd then continued, eventually coming around to an infamous episode involving Donald Trump publicly revealing Lindsey Graham’s phone number: “Okay, what if the president gave out your personal cell phone number to thousands of strangers, who then harassed you and sent death threats, causing you to get rid of your phone?”

“Well now, Chuck, I do have to disqualify myself,” Graham says, “Because back in 2015, the president actually did that to me.”

“Yeah, I know. I was just seeing if you remember,” Todd replies. “Okay, let’s say Trump open-hand slaps you in the face. What would you say then?”