Franklin Graham: “I Think God Was Behind The Last Election” 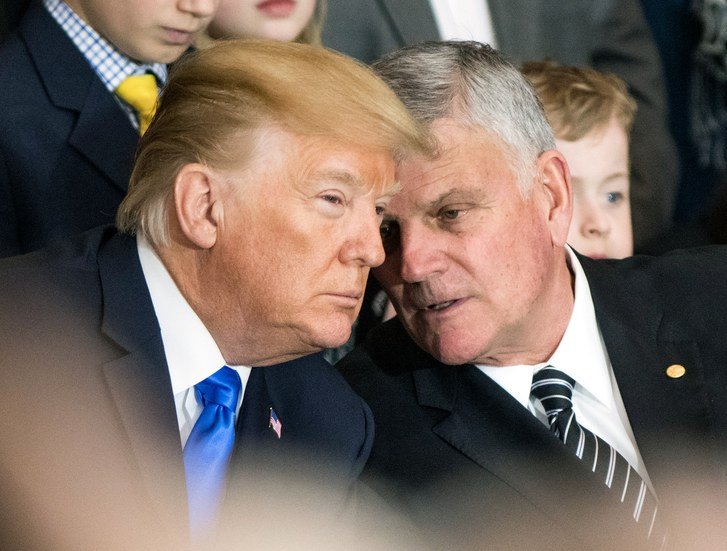 Evangelist Franklin Graham claims in a new interview that divine intervention might be the reason President Trump won in 2016.

“I think God was behind the last election,” Graham told conservative news site The Western Journal,

The outspoken Trump supporter praised the president in an interview, bragging that Trump has accomplished a lot “without a fully supportive Republican majority.”

“He, of course, has been able to do it with the relentless attacks of the Democrats,” Graham continued. “He may go down in history as one of the best presidents we’ve had.”

The Christian leader has previously cited Trump’s polices as proof that the president defends the Christian faith.

“I think he has honored his commitments to the faith-based community,” Graham told the outlet. “He is pro-life, the first president really in my lifetime that has been this vocal about life. I certainly appreciate that about him.”

“He’s put two Supreme Court justices so far on the bench that are conservative. He’s appointed a number at lower courts. I hope that he’ll be able to do even more in that area, because that will have an impact on my childrens’ lives. If we have the right judges, it will benefit all of us.”

Graham, the son of the late prominent evangelist Billy Graham, is the president of the evangelical organization Samaritan’s Purse and the Billy Graham Evangelistic Association.

Not every evangelical agrees with Graham’s assessment.

“What Franklin Graham has done to his father’s good name is scandalous,” said Susan Wright, author of But God: Seeking Our Father, Unafraid. “Franklin Graham and the Christian right in the United States have inserted Donald Trump into the mix, and it is depressing. He is capitalizing on that clout by turning the ministry into a tool for partisan politics.”

Last month, Graham and 250 other Christian leaders held a “Special Day of Prayer” to “protect, strengthen, encourage, and guide” Trump.