Gerrymander Away! Supreme Court Says Federal Courts Have No Role In Electoral Maps 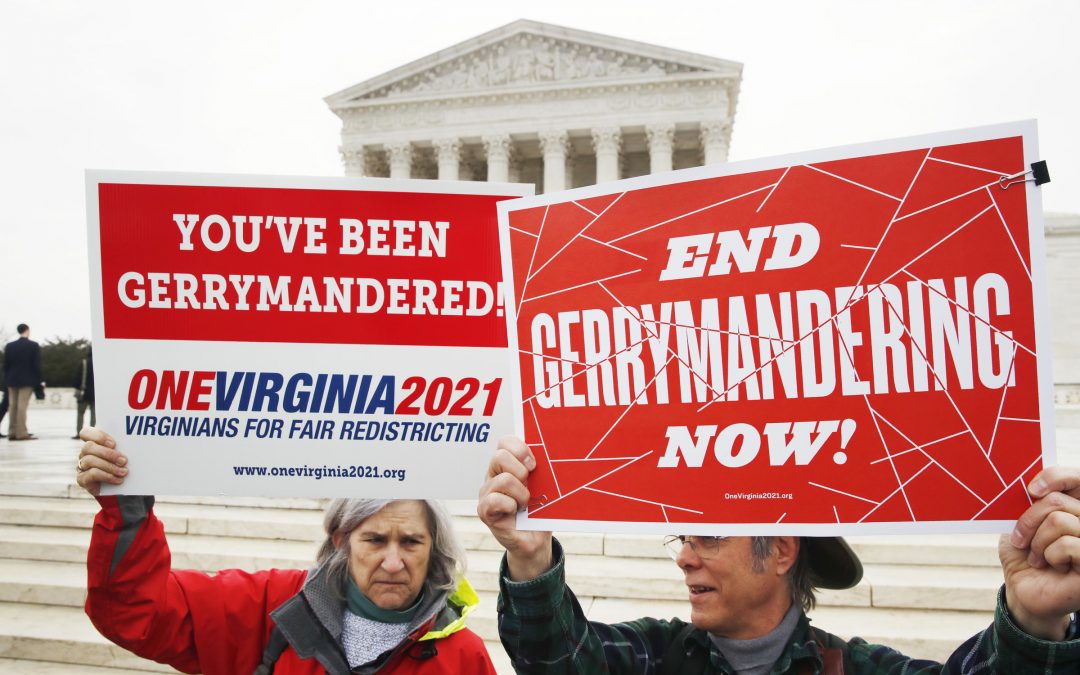 The Supreme Court’s conservatives decided today that federal courts do not have a role to play in deciding whether partisan gerrymandering goes too far, giving a dominant political party in a state leeway to draw electoral maps that preserve or even expand its power.

The 5-to-4 decision was written by Chief Justice John Roberts and joined by the court’s other conservatives.

“We conclude that partisan gerrymandering claims present political questions beyond the reach of the federal courts,” Roberts wrote. “Federal judges have no license to reallocate political power between the two major political parties, with no plausible grant of authority in the Constitution, and no legal standards to limit and direct their decisions.”

The action puts a stop to recent decisions by federal courts across the country that have found extreme partisan gerrymandering went so far as to violate the constitutional rights of voters.

While both parties take advantage of drawing electoral districts when they have control in a state, the most recent beneficiaries have been Republicans.

The GOP is in control of both the governorship and legislature in 22 states, compared to 14 for Democrats.

The recent decisions striking down Republican gerrymanders have come in battleground states such as Wisconsin, Ohio and Michigan.

President Ronald Reagan, a conservative, said in his final television interview before leaving the White House that not achieving reapportionment reform was his biggest disappointment in office.

“I think that a bipartisan committee representing both parties and top ranking citizens would do a job that would be based on the needs of the districts,” Reagan told ABC’s David Brinkley. “When you leave it to legislators, it’s a conflict of interest.”

The court was considering a Republican-drawn map in North Carolina and a Democratic gerrymander in Maryland.

The maps, which have provided a 10-to-3 GOP advantage in congressional districts in the former, and a 7-to-1 Democratic advantage in the latter, will stand until they are redrawn after the 2020 Census.

“Excessive partisanship in districting leads to results that reasonably seem unjust,” wrote Roberts. “But the fact that such gerrymandering is incompatible with democratic principles does not mean that the solution lies with the federal judiciary.”

Justice Elena Kagan dissented for the court’s liberals. “For the first time ever, this court refuses to remedy a constitutional violation because it thinks the task beyond judicial capabilities,” she wrote.
Kagan underscored her disagreement by reading — at times, emotionally — a lengthy excerpt of her dissent from the bench.

“The gerrymanders here — and others like them — violated the constitutional rights of many hundreds of thousands of American citizens,” she said.

“The practices challenged in these cases imperil our system of government. Part of the court’s role in that system is to defend its foundations. None is more important than free and fair elections.”

She closed by saying her dissent was “with respect, but deep sadness.”

While the Supreme Court regularly scrutinizes electoral districts for racial gerrymandering, the justices have never found a state’s redistricting map so infected with politics that it violates the Constitution.

Such a decision would have marked a dramatic change for how the nation’s political maps are drawn.

The court passed up the chance last term to settle the issue of whether courts have a role in policing partisan gerrymandering, sending back on technical rulings challenges to a Republican-drawn plan in Wisconsin and the challenged Maryland map.

There’s been less reticence outside the Supreme Court.

With recent decisions in Ohio and Michigan, federal courts in five states have struck down maps as partisan gerrymanders.

And last fall, voters in Michigan, Ohio, Colorado, Missouri and Utah either took redistricting away from politicians or limited their power.