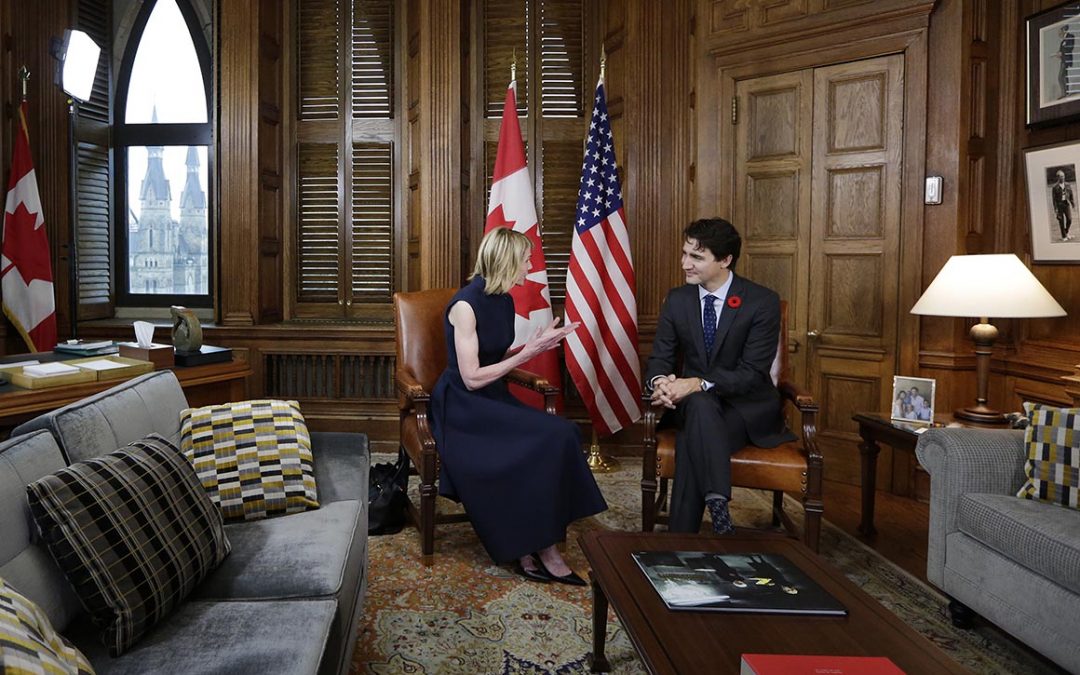 President Trump’s nominee to be ambassador to the United Nations – current U.S. ambassador to Canada Kelly Craft – was frequently absent from her post in Ottawa, raising questions about her level of engagement with the job.

Her absences from her official post are likely to be an issue in her confirmation hearing, which is now scheduled for Wednesday.

Federal Aviation Administration records obtained under the Freedom of Information Act by POLITICO show that a private jet registered to Craft’s husband and used by the ambassador made 128 flights between the United States and Canada during a 15-month span of her tenure in Ottawa, the equivalent of a roundtrip once a week.

Some of the trips correspond with dates of events Craft attended in her home state of Kentucky – such as the Kentucky Derby and a media interview at a University of Kentucky basketball center named for her husband Joe Craft, a coal billionaire – but neither she nor he, through their spokespeople, would confirm how many of the flights involved her travel.

The issue of her travels is likely to be particularly relevant at her confirmation hearing before the Senate Foreign Relations Committee because Craft lacks the lengthy political or diplomatic experience of most former ambassadors to the United Nations.

A 57-year-old business consultant from Lexington, Kentucky, Craft served from 2007 to 2008 as an alternate delegate to the U.N. under President George W. Bush but otherwise spent her career in the private sector.

Her year and a half tenure in Ottawa represents her prime credential for serving as the lead representative to the United Nations, a position that takes on added importance at moments of international crisis or brinksmanship.

Hill aides say they are concerned about how often she was away from her post in Ottawa, and whether the trips to the United States were for personal rather than official business.

A Democratic aide who has spoken with current and former senior officials in the U.S. government said they depicted the ambassador as “frequently absent from the U.S. embassy in Ottawa, and in some cases for extended periods of time.”

In addition, a former U.S. official who is in touch with State Department leaders said Craft was viewed around Foggy Bottom as an “absent ambassador” at the embassy in Ottawa and that the mission was often placed in the hands of her deputy while attending to personal business and domestic politics in the United States.

Ambassadors are required to spend no more than 26 work days a year away from their posts on personal leave without first obtaining special State Department approval, according to the department’s Foreign Affairs manual.

Though Craft’s absences from the embassy in Ottawa on work days are recorded on her schedule, neither the embassy nor the State Department officials would provide records of how many days she was present in Ottawa.

A senior member of the U.S. mission team in Canada, speaking with State Department approval to defend Craft’s performance, acknowledged that Craft left the embassy in the control of a separate charge d’affaires “more times. . . than perhaps at any other embassy.”

The official, who has not worked at the embassy for the entirety of Craft’s tenure, said he could not characterize how many of Craft’s trips were for personal as opposed to official business, but said she was often in Washington for trade negotiations because “she was directly involved in being a bridge” between the two countries.

She would also fly to other places in the United States to promote the trade deal, one of Trump’s top political priorities.

At those times, she’d sometimes spend the weekend at her Kentucky home rather than return to Ottawa, which does not count toward the 26 days away from her post.

While on trade-related trips to the United States, the senior official said, she often missed ceremonial diplomatic events, such as celebrations of national holidays at other embassies in Ottawa.

The Federal Aviation Administration records obtained by POLITICO under the Freedom of Information Act showed a total of 335 flights from January 1, 2018 – two months after Craft took over as ambassador – and April 10, 2019, a month and a half after she was chosen by Trump to succeed former South Carolina Gov. Nikki Haley as U.N. ambassador.

Craft was also a surprising choice, given her relatively short tenure in Canada.

She and her husband Joe, the 68-year-old CEO of Alliance Resource Partners LLC – the third-largest coal producer in the United States – married in 2016.

Both are supporters of Senate Majority Leader Mitch McConnell (R-Ky.), who urged Trump to give her the U.N. appointment.