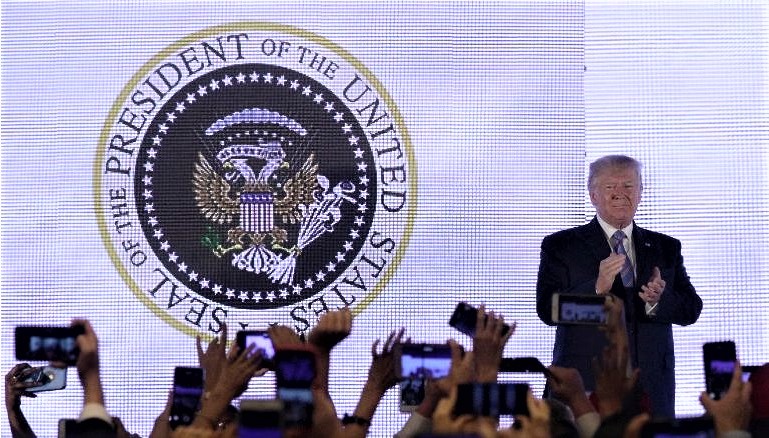 An audiovisual aide for conservative student group Turning Point USA was fired after President Trump appeared on a stage in front of a parody image of the presidential seal at its Teen Student Action Summit.

As Trump walked onstage to a cheering audience, a bogus presidential seal flashed on screen behind him.

Instead of the customary bald eagle, the altered image showed a double-headed eagle, similar to that featured in Russia’s national emblem.

Instead of arrows, the eagle clutched a set of golf clubs in a talon. 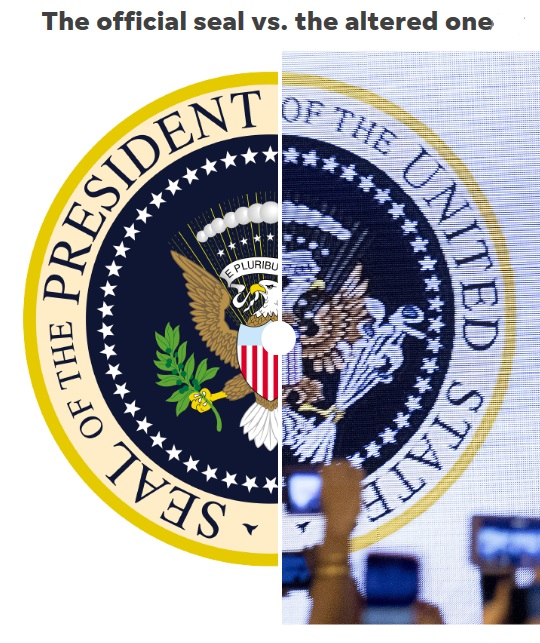 It appeared as the president emerged onstage.

The fake seal’s appearance at the event seemed to catch everyone off guard.

A White House spokesman told The New York Times that officials did not review the image before it appeared.

Turning Point USA initially said it had no idea how it ended up there.

In the hours after the image was circulated online, an aide at the organization was fired.

The seal appeared to be the same as one used to sell anti-Trump merchandise in an online store.

In an interview, the store’s proprietor, Charles, said he had created the image, based on the Russian double-headed eagle, a little over a year ago out of frustration with Trump and his policies.

He asked that his last name not be used because he is receiving hateful messages online. 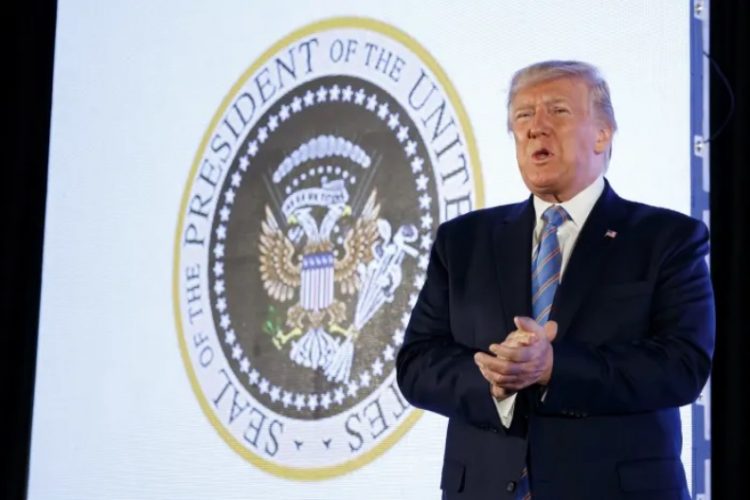 “This is the most petty piece of art I think I’ve ever designed,” said Charles, who is based in Virginia and works in video production and graphic design. “This was every petty, little thing I could think of to needle him because he was driving me bananas with his politics.”

After he created the altered seal, Charles shared it with friends, who encouraged him to sell it online, so he created a website and store and quickly moved on with his life.

Then, on Thursday morning, he said he was surprised to come across his creation in a news article while he was drinking coffee and scanning Reddit.

The doctored image quickly became a talking point among liberals and conservatives alike.

Online, some delighted in the dig and called it “brilliant trolling.”

Others denounced the switch as an offense worthy of dismissal.

The alterations were subtle enough.

The traditional presidential seal contains the image of an eagle, which holds arrows representing war in one talon and olive branches representing peace in the other.

A banner above its head bears the motto “E Pluribus Unum,” Latin for “Out of Many, One.”

The eagle in the altered image had two heads, a symbol featured on the national emblem of Russia, the flags of several other countries and the logos for two Trump golf resorts in Scotland.

The symbol is often associated with power and empire.

In that seal, the eagle clutches golf clubs and what appears to be a wad of money in its talons.

The banner above its head reads “45 Es un Títere,” Spanish for “45 Is a Puppet.” And a shield across the eagle’s chest features five instances of the hammer and sickle, a Communist symbol associated with the Russian Revolution.

The event was an unlikely setting for criticism, and it is unclear if Trump was aware of the fake seal.