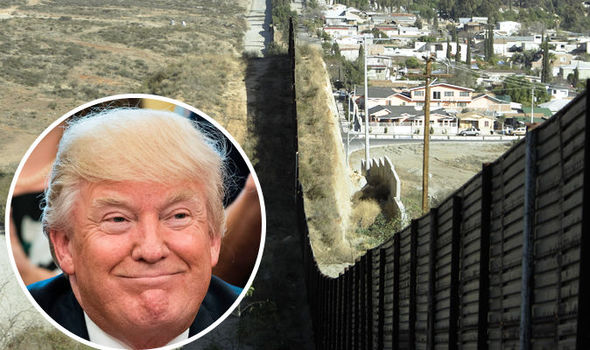 A split Supreme Court said tonight that the Trump administration could proceed with its plan to use $2.5 billion in Pentagon funds to build part of the president’s wall project along the southern border.

The court’s conservatives set aside a lower-court ruling for the Sierra Club and a coalition of border communities that said reallocating Defense Department money would violate federal law.

It also means Trump can look elsewhere beyond Mexico to pay for his signature campaign process.

“I would build a great wall, and nobody builds walls better than me, believe me, and I’ll build them very inexpensively,” Trump said when he announced for president in 2015. “I will build a great great wall on our southern border and I’ll have Mexico pay for that wall.”

Today’s unsigned ruling came in response to an emergency filing from the administration during the court’s summer recess.

The majority said the government “made a sufficient showing at this stage” that private groups may not be the proper plaintiff’s to challenge the transfer of money.

The court’s action is a stay of the injunction issued by the U.S. Court of Appeals for the 9th Circuit on a 2-to-1 vote, and the litigation continues.

The administration wants to finalize contracts for the work before the fiscal year ends Sept. 30.

Three justices — Ruth Bader Ginsburg, Sonia Sotomayor and Elena Kagan — would have left it in place.

Justice Stephen G. Breyer proposed a compromise to which no one signed on: allow the government to finalize contracts for the project but not begin construction.

In a tweet after the court’s announcement, President Trump declared the development a “Big WIN for Border Security and the Rule of Law!”

The groups opposing the wall construction noted that the litigation continues.

“This is not over. We will be asking the federal appeals court to expedite the ongoing appeals proceeding to halt the irreversible and imminent damage from Trump’s border wall,” Dror Ladin, staff attorney with the American Civil Liberties Union’s National Security Project, said in a statement. The ACLU represented the groups.

“Our Constitution’s separation of powers will be permanently harmed should Trump get away with pillaging military funds for a xenophobic border wall Congress denied.”

In a decision earlier this month, a 9th Circuit panel noted that a stalemate between Congress and Trump over the issue prompted the longest government shutdown in history.

The judges reasoned that Congress made its intentions clear by allocating only about $1.4 billion for enhanced border protection.

After Congress’s decision this year, Trump announced plans to use more than $6 billion allocated for other purposes to fund the wall, which was the signature promise of his presidential campaign

Environmentalists and the Southern Border Communities Coalition immediately filed suit to block the transfer of funds.

Democrats in the House of Representatives filed a brief supporting them.