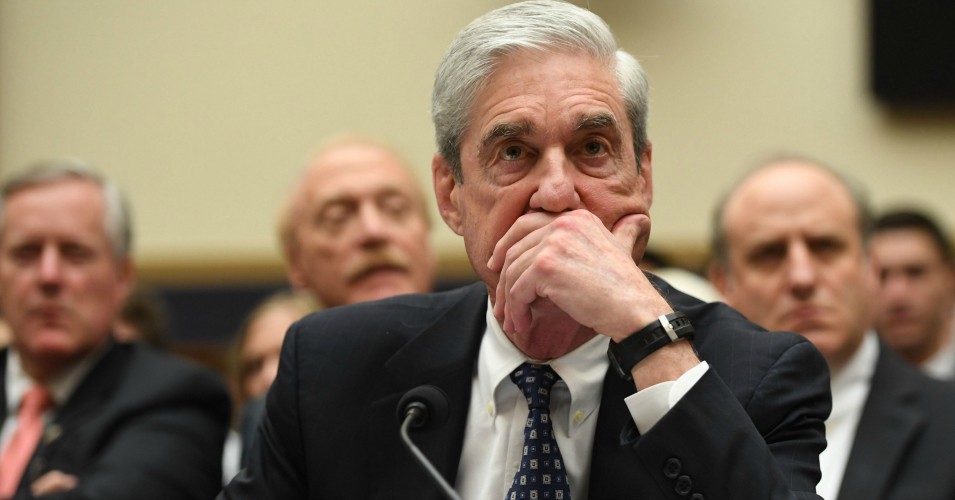 Americans watching from coast to coast today discovered Robert Mueller is not the sharp, younger FBI Director he used to be.

In two separate House hearings, the former special counsel verbally stumbled, asking lawmakers to repeat their questions and was reluctant at times to offer responses.

Even as GOP Reps. John Ratcliffe (Texas) and Louie Gohmert (Texas) ripped into his report and his team, Mueller for the most part refused to engage.

He told Gohmert at the end of one fiery and critical monologue, “I take your question.”

When it was over, President Trump declared:

TRUTH IS A FORCE OF NATURE!

Mueller, whose steely reputation has cast a long shadow over the Trump’s tenure, proved — at least in the early offing — a less formidable witness in the flesh than Democrats had hoped, offering up clipped, monosyllabic responses and repeatedly asking lawmakers to repeat their questions.

Watching from the White House, at least one Trump aide said the former FBI director, who spent some 22 months investigating the president, simply seemed past his prime and incapable of doing Trump much harm.

‘Obviously he did very poorly today. I don’t think there’s anybody who would say he did well,’ said Trump.

‘The performance was obviously not very good. He had a lot of problems,’ said Trump.

‘If you listen to the Internet, this was one of the worst performances of the history of our country,’ Trump said.

Mueller, who had been reluctant to appear at the hearing, seemed to get more comfortable as the more than three-hour hearing went on.

He offered a spirited defense of his team of prosecutors in response to allegations they had political motivations for their findings.

But outside commentators characterized his testimony as uneven.

Former Obama aide and CNN political commentator David Axelrod said that Mueller didn’t seem to be performing as well as he has in the past.

“This is delicate to say, but Mueller, whom I deeply respect, has not publicly testified before Congress in at least six years. And he does not appear as sharp as he was then,” Axelrod said.

Mueller at one point didn’t recall that he was tapped by President Reagan to serve as U.S. Attorney in Massachusetts, instead saying former President George W. Bush had appointed him to the job.

Mueller declined to answer a wide swath of questions:

A tally by MSNBC put the number of times he declined to answer questions at more than 130.

Donald Trump Jr. went on a Twitter rant after Mueller said he wasn’t familiar with Fusion GPS – the research firm that is attributed with helping conceive the Russia investigation.

‘How can anyone credibly say they investigated something without looking at any of the origins of the entire thing… it’s dumbfounding,’ Trump Jr. tweeted. ‘2 years and almost $50,000,000 & and he doesn’t have a clue to how it started? GTFO’

The president’s eldest son suggested in tweeting the acronym for ‘get the f**k out’ that he wasn’t buying Mueller’s claim – which the former special counsel made under oath – that he didn’t know about the firm or its report .

‘Does anyone honestly believe that after two years and $50 million Robert Mueller does not know anything about fusion GPS given that it was the genesis of the entire investigation?’ he continued in another tweet.

‘Has he not opened a paper, even a leftist, one or watched TV in that time? Tough to believe,’ Don Jr. posted.

Republicans on Capitol Hill were spiking the football before the hearings were out.

“This is the death rattle for impeachment. The Democrats on the dais looked as if they had been held at a funeral for too long,” said Rep. Matt Gaetz (R-Florida), one of the president’s closest allies on Capitol Hill.

Another of the president’s allies in the House Republican conference, Rep. Mark Meadows of North Carolina, even suggested that the former special counsel wasn’t in full command of his faculties.

“Mueller still struggling to answer even basic questions,” he tweeted. “He can’t accurately remember facts, evidence, or even his own conclusions. Folks—this guy didn’t run the investigation. His team of Resistance Democrats did. And they used it as a weapon to target a President they hated.”

Meadows doesn’t serve on the Judiciary Committee but sat in the audience and live-tweeted the entire, three-hour hearing.

He could barely contain his excitement when speaking with reporters afterward.

“The expectations set by Democrats didn’t come close to delivering… I’m certainly very pleased,” he said with a smile. “It’s obviously a good day for the president. It’s hopefully a good day for America.”

Still, a number of moments did stand out.

Mueller said that his findings do not exonerate Trump, a statement that he’s made previously and is featured predominantly in his report released earlier this year.

“The finding indicates that the president was not exculpated for the acts that he allegedly committed,” Mueller said on Wednesday.

The importance of that statement was highlighted later, when Mueller said that he believed a president could be indicted on an obstruction of justice charge after leaving office.

Many congressional Democrats believe that Mueller’s appearance may take wind out of the sails of impeachment that have been brewing for months.