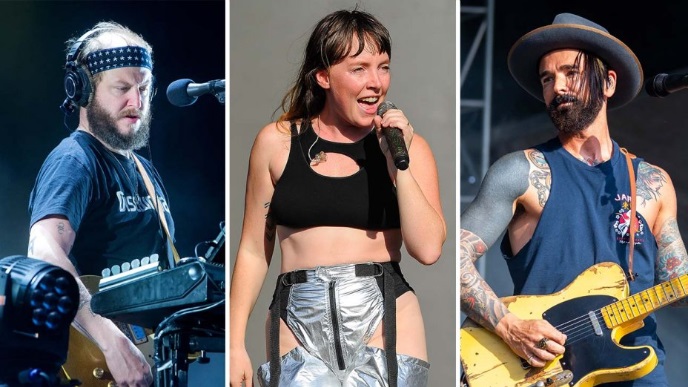 The 2020 election is about to get a whole new sound.

Started by former music manager Kyle Frenette, the ’46 for 46′ campaign has already attracted the likes of Bon Iver, Sylvan Esso and Dashboard Confessional.

46 for 46 is described as a “strategically planned series of 46 unique concerts in 46 different cities in the states that matter most during the lead up to the 2020 election.”

The goal: to help launch the Democratic presidential nominee into the White House using the inspirational power of music.

The minds behind the campaign are Frenette and Christopher Moon, longtime artist managers who felt compelled to use their considerable Rolodexes in service of the Democratic campaign for president.

For Frenette — who owns the artist management firm Middle West and represented Bon Iver and its frontman Justin Vernon between 2007 and 2018 — the project is part of a larger pivot toward politics that began in February 2018, when he announced his bid to represent Wisconsin’s 7th district in Congress.

Frenette had never held or run for political office before, making his headlong leap into the political fray nothing if not a bold move.

But as with so many others, Trump’s shocking win in 2016 had shattered the sense of complacency he had built up over the previous eight years.

“I voted for [Barack Obama], he was elected, he seemed like a very good leader, and I thought everything would be taken care of,” Frenette tells Billboard. “It almost seems like that was this country’s M.O. in a way. Meanwhile, you’ve got the GOP sweeping in on the state level and putting all of these things in place and taking advantage of the political divide.”

While Frenette ultimately withdrew his candidacy in that Congressional race (“I realized pretty quickly that I work better behind the curtain,” he says now), his newfound drive towards the political arena had built up a considerable head of steam.

He went on to project-manage a “small but impactful” Rock the Vote voter turnout campaign during the 2018 midterms and additionally enlisted Vernon to headline a rally concert for Wisconsin Democratic Sen. Tammy Baldwin, whose seat was then being challenged by Republican state senator Leah Vukmir.

It was the latter event that spawned the idea for 46 for 46.

“The concert sold out and we raised the most money in a single evening [of Tammy’s] entire political career,” says Frenette of the show, which raised an estimated $146,000 from more than 2,000 attendees. “And

In the aftermath of Baldwin’s reelection, Frenette set out to do more of what he calls “bridging the gap between music, activism and politics.”

While he has other initiatives in the works, including an Aug. 16 concert to benefit the campaign to save the Boundary Waters Canoe Area Wilderness in Northern Minnesota, 46 for 46 stands as his first nationwide initiative.

Primarily designed to target voters in the swing states that went to Trump in 2016, 46 for 46 entails recruiting artists who either hail from or live in those states — or who at least have some association with them — to play one or more concerts on their home turf in the critical months leading up to the election.

In an effort to reach those who live outside the major cities, Frenette is also committed to putting on shows in rural areas and tertiary touring markets, “where we can draw people in who don’t have [normally] access to this kind of thing,” he says.

Still, Frenette is careful not to characterize 46 for 46 as a concert tour in its own right.

“The best way to look at it is as a marketing campaign that works in tandem with the concerts,” he says, noting that artists who participate will retain autonomy even as each show (which could theoretically include stops on an existing tour) is branded and promoted under the 46 for 46 banner.

Still, the goal is to have each artist mention the campaign “at least twice” from the stage, as well as to promote it via media appearances and social posts.

As Frenette envisions it, the participating artists will each exercise a heavy hand in informing what the concerts look like and what kind of partnerships are formed.

“If they were to go to their hometown and book a show, we say, ‘Who would you partner with? Where would you play? Who would the promoter be? How would this work?’” he says. “And we’ll just help you market it in this way that showcases a unified front.”

Already, Frenette has tapped into a network cultivated over a decade in the music industry to secure the participation of a crop of notable artists.

But with a mandate to book 46 concerts by next September (shows will likely take place between August and October), the campaign still has a long way to go — and Frenette and Moon are now looking to extend beyond their indie-rock connections to pull in a wider variety of artists and genres, from hip-hop acts to artists with more right-leaning fan bases (think: country stars).

Frenette is realistic about the limits of his network. “I’m a white guy, my partner’s a white guy,” he says. “We need to diversify here.”

You can find more information on the 46 for 46 campaign here.