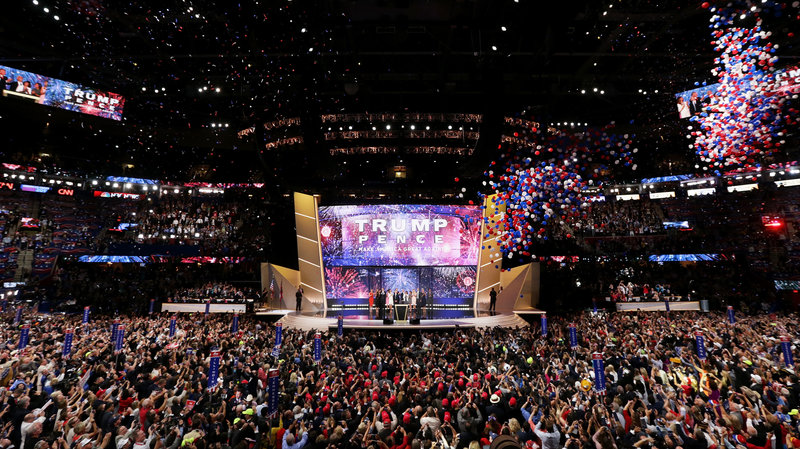 The Charlotte City Council last night passed a resolution condemning President Trump’s “racist and xenophobic comments,” in a rebuke of the president by the city that will host him next year at the Republican National Convention.

The 9-to-2 vote came a week after Trump sent a racist tweet in which he said four minority congresswomen — Democratic Reps. Ayanna Pressley (Mass.), Ilhan Omar (Minn.), Alexandria Ocasio-Cortez (N.Y.) and Rashida Tlaib (Mich.) — should “go back and help fix the totally broken and crime infested places from which they came.”

It also came after Trump held a rally in Greenville, N.C., about 220 miles from Charlotte, at which supporters chanted “Send her back! Send her back!” in response to Trump’s criticism of Omar.

All four of the congresswomen are U.S. citizens.

Omar was born in Somalia and became a U.S. citizen as a teenager.

James Mitchell Jr., one of the council members who supported the resolution, said the move was intended to send a message to the White House: “We may not be able to control what you say, but we’re going to tell you how we feel about it in Charlotte, North Carolina.”

The resolution, which was introduced by council member Justin Harlow, specifically mentions the two incidents involving the minority congresswomen, as well as several of Trump’s previous remarks, such as his statement that there were “very fine people” on both sides of the white-nationalist rally in Charlottesville in 2017.

The measure states that the city council “strongly condemns all of President Donald Trump’s racist and xenophobic social media tweets and comments.” It also “acknowledges that many of the City’s residents are immigrants and/or people of color” and “condemns all hate speech, bigotry, racism, and discrimination, wherever it may occur, especially from the highest levels of government.” 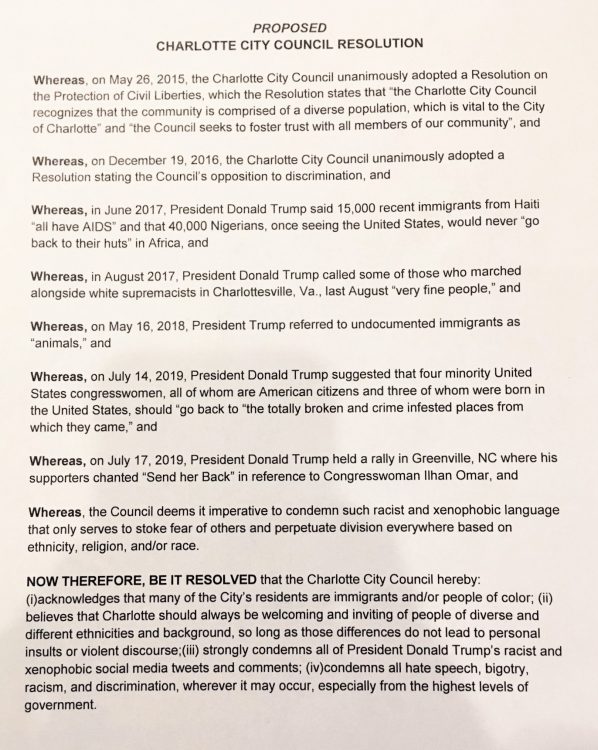 The House of Representatives last week passed a resolution condemning Trump’s remarks about the four congresswomen, rejecting the president’s “racist comments that have legitimized fear and hatred of new Americans and people of color.”

A little over a year ago, the Charlotte City Council narrowly voted 6 to 5 to give the convention the green light.

That was followed by a unanimous vote in favor of Charlotte by the Republican National Committee’s site selection panel.

But the prospect of Charlotte hosting the GOP convention sparked heated debate; some local Democrats argued last year that the city should not play host to Trump given his inflammatory remarks, with one council member describing Trump as “a demagogue of hate.”

The city’s Democratic mayor, Vi Lyles, wrote last year in a Charlotte Observer op-ed that she would welcome the GOP convention to her city — both for its economic impact and to send a message of inclusivity at a time when national partisan tensions are running high.

The debate has only intensified in the wake of Trump’s most recent remarks.

Harlow tweeted last Thursday: “If the RNC vote was redone today, I bet @CLTgov wouldn’t be hosting it. Would probably be a 7-4 vote against instead of 6-5 in favor.”

Pointing to the “Send her back!” chants in Greenville, Lyles asked: “Why is this still us? Why in this state, in North Carolina, do we still have that statement?”

Despite the calls to reconsider hosting the convention, it appears the city’s options are limited.

The Charlotte city attorney, Patrick Baker, said he had examined the contract and determined that the city probably would not be able to walk away from it, even if it were willing to suffer the financial penalties of doing so.

“I’m not in a position to recommend that you terminate the contract,” Baker said, noting that a potential breach could trigger a lawsuit that would result in the city being forced to follow through on its contractual obligations.

After the resolution condemning Trump’s remarks passed, some in the room applauded. But Lyles quickly told them to stop.