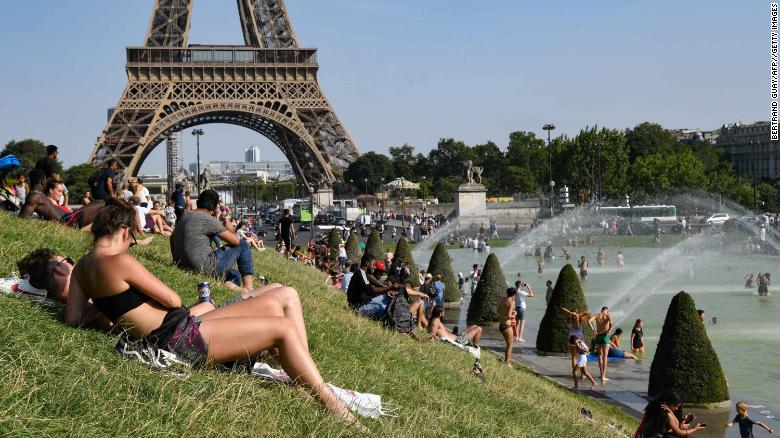 On Wednesday and Thursday, new national heat records were set in France, Belgium and the Netherlands, and temperatures rose to record highs in major cities such as Paris, which soared to 109 degrees.

This is the hottest Paris has been in recorded history.

The heat wave, caused by a massive area of high pressure extending into the upper atmosphere, also known as a heat dome, is set to envelop Scandinavia in the next two days, before making a run at the Arctic.

This could dramatically speed up the melting of the Greenland Ice Sheet and enhance the loss of already record-low sea ice.

Scientific studies show that heat waves are becoming more common, severe and longer-lasting as global temperatures warm in response to human activities, including in Europe.

They are also now more likely to occur.

On Thursday, new national heat records were set in Germany, the Netherlands and Belgium.

Both Paris and London broke records Thursday, as well. 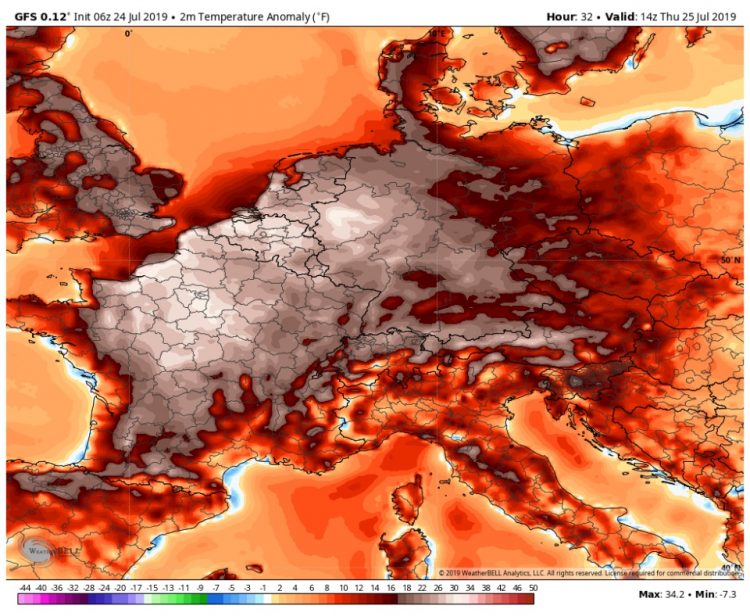 In the Netherlands, Thursday marked the first time that temperatures had exceeded 104 degrees (40 Celsius).

As in the case of London and much of the rest of Western Europe, most Parisians lack air conditioning, which heightens the health threat posed by such an intense heat wave.

It’s extremely unusual to break monthly and all-time temperature records by such a large margin, which attests to the intensity of the ongoing heat event.

It’s even more difficult to beat all-time heat records in mid-July, considering this is the hottest time of year.

In Britain, Cambridge reached 100.6 degrees (38.1 Celsius), which the Met Office says is only the second time that temperatures above 100 degrees have been recorded in the country.

In Germany, a record of 107 degrees (41.7 Celsius) was set Thursday, which beat the old record — which was set just the day before.

The high temperature in London was 98.2 degrees (36.9 Celsius), which set a national record for the hottest temperature recorded in July, the Met Office reported, noting that temperatures were still increasing and that the country’s record could be toppled before the end of the day.

In Belgium, the temperature hit 103.8 degrees Wednesday, the hottest since records began to be kept in 1833.

The intense area of high pressure, also referred to as a blocking high because it reroutes storms like a detour in the atmosphere, is forecast to migrate northward by the weekend, parking itself over Scandinavia. Sweden, Norway and Finland are likely to set heat records through the weekend as a result, and then it’s possible that this weather feature will become an unusual warm event across much of the Arctic Ocean and Greenland.

The consequences of this would-be sped-up ice melt in Greenland as well as the Arctic Ocean.

It’s possible that it would increase the likelihood that this year will feature a record low in sea ice extent at the end of the melt season in September.

Already, ice extent is running at a record low, as Arctic-wide temperatures have reached record highs from May through June.

And in Greenland, the ice sheet has lost 160 billion tons of ice through surface melting in July, according to Ruth Mottram of the Danish Meteorological Institute.