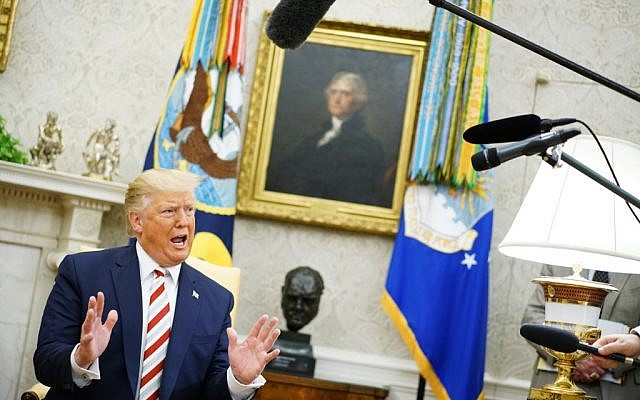 There was swift backlash today after President Trump questioned the intelligence and loyalty of Jewish voters.

Trump criticized Jewish Americans who vote for Democrats, saying “it shows either a total lack of knowledge or great disloyalty.”

Trump was speaking to the press in the Oval Office about two Democratic congresswomen barred from entering Israel over their involvement in the movement to end international support for the country because of its policies toward Palestinians.

“Five years ago, the concept of even talking about this — even three years ago — of cutting off aid to Israel because of two people that hate Israel and hate Jewish people — I can’t believe we’re even having this conversation,” Trump added. “Where has the Democratic Party gone? Where have they gone where they’re defending these two people over the State of Israel?”

He added, “I think any Jewish people that vote for a Democrat — it shows either a total lack of knowledge or great disloyalty.”

The remark led critics to argue Trump was dabbling in the anti-Semitic trope of “dual loyalty,” which questions the loyalty of Jewish citizens.

“It’s unclear who @POTUS is claiming Jews would be ‘disloyal’ to, but charges of disloyalty have long been used to attack Jews. As we’ve said before, it’s possible to engage in the democratic process without these claims. It’s long overdue to stop using Jews as a political football,” Anti-Defamation League CEO Jonathan Greenblatt tweeted late today.

Halie Soifer, executive director of the Jewish Democratic Council of America, called the comments “yet another example of Donald Trump continuing to weaponize and politicize anti-Semitism.”
“If this is about Israel, then Trump is repeating a dual loyalty claim, which is a form of anti-Semitism. If this is about Jews being ‘loyal’ to him, then Trump needs a reality check. We live in a democracy, and Jewish support for the Republican Party has been halved in the past four years,” Soifer added.

J Street, a liberal advocacy group focused on reaching a resolution between Israel and the Palestinian territories, said in a statement, “It is dangerous and shameful for President Trump to attack the large majority of the American Jewish community as unintelligent and ‘disloyal.’ ”

Trump has suggested that Jewish Americans, who are traditionally staunch supporters of the Democratic Party, are leaving it.

But polling suggests that Jewish Americans continue overwhelmingly to be Democrats and opposed to Trump.

Jewish Americans voted for the Democratic Party by about a 3:1 margin in the 2018 midterm elections.

And Jewish Americans are far more likely to call themselves Democrats than Republicans.

Trump has previously suggested Jewish Americans have a dual loyalty to Israel and its prime minister, Benjamin Netanyahu, including when he told the Republican Jewish Coalition in April that Netanyahu was “your prime minister.”

The Republican Jewish Coalition defended Trump’s statement on Tuesday, tweeting, “President Trump is right, it shows a great deal of disloyalty to oneself to defend a party that protects/emboldens people that hate you for your religion.”