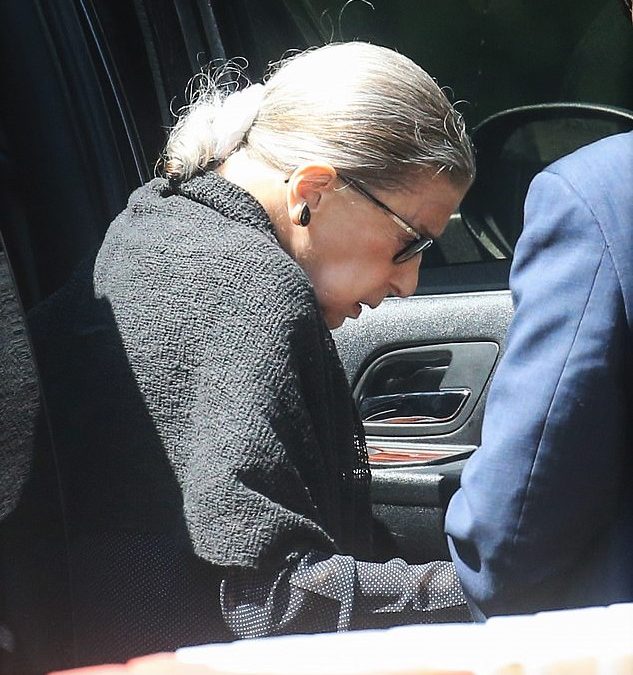 Supreme Court Justice Ruth Bader Ginsburg was seen leaning on a U.S. Marshal after leaving a New York City hospital yesterday, a day before it was confirmed she had completed radiation treatment for a cancerous tumor on her pancreas.

“The tumor was ‘treated definitively and there is no evidence of disease elsewhere, and no further treatment is needed at this time”, the statement said.

Yesterday, Ginsburg was seen holding the hand of a U.S. Marshal as she walked up the stairs into a private residence on the Upper East Side after her appointment at the Howard Laboratory at the Memorial Sloan Kettering hospital. 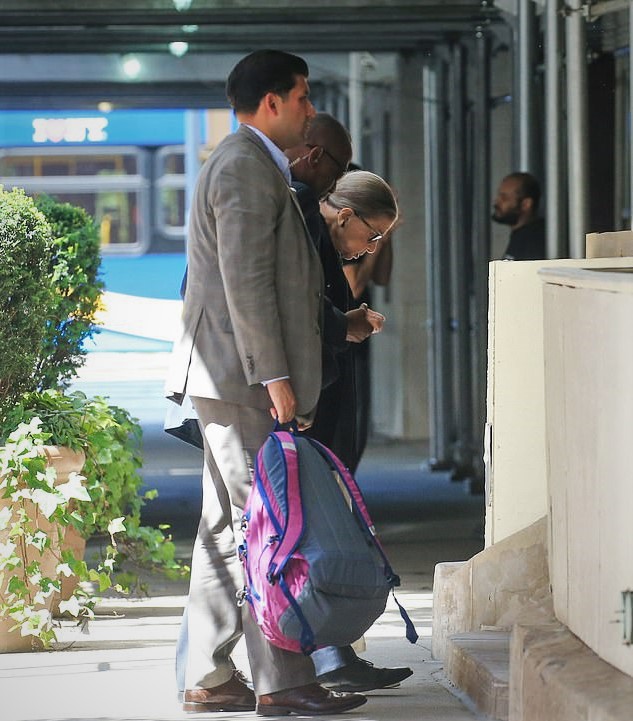 Ginsburg has been diagnosed with cancer three times already, colon cancer in 1999, pancreatic cancer in 2009 and lung cancer in 2018.

Ginsburg is the oldest sitting U.S. Supreme Court Justice and said it is her ‘dream’ to be on the Supreme Court for as long as former Justice John Paul Stevens, who served for 35 years.

Ginsburg has served for 26 years so far.

On Thursday, one U.S. Marshal helped her up the steps while another carried her purple backpack.

After her appointment, she was dropped off at a private residence on the Upper East Side.

Ginsburg has been diagnosed with cancer three times already, colon cancer in 1999, pancreatic cancer in 2009 and lung cancer in 2018.

‘The focused radiation treatment began on August 5 and was administered on an outpatient basis to treat a tumor on her pancreas. The abnormality was first detected after a routine blood test in early July, and a biopsy performed on July 31 at Sloan Kettering confirmed a localized malignant tumor.

‘As part of her treatment, a bile duct stent was placed. The Justice tolerated treatment well. She cancelled her annual summer visit to Santa Fe, but has otherwise maintained an active schedule.

‘The tumor was treated definitively and there is no evidence of disease elsewhere in the body. Justice Ginsburg will continue to have periodic blood tests and scans. No further treatment is needed at this time.’

Last month Ginsburg dismissed concerns regarding her health in an interview with NPR, sneering at a late senator who claimed she would be dead soon after her pancreatic cancer diagnosis in 2009.

‘There was a senator, I think it was after my pancreatic cancer, who announced, with great glee, that I was going to be dead within six months,’ she recalled.

‘That senator, whose name I have forgotten, is now himself dead,’ Ginsburg and the interviewer laughed, ‘and I am very much alive.’

Pancreatic cancer is one of the most deadly cancers, and only has a 20 percent survival rate in the first year after diagnosis and 7 percent five-year survival rate.

A leading liberal voice, her absence would allow President Trump to reshape the Supreme Court for generations to come.

Ginsburg told NPR that every time she’s had cancer, it was her work on the Supreme Court that ‘saved’ her.

‘I had to concentrate on reading the briefs, doing a draft of an opinion, and I knew it had to get done,’ she said. ‘So I had to get past whatever my aches and pains were just to do the job.’