Surprising No One, Sarah Huckabee Sanders Hired By Fox News As Contributor 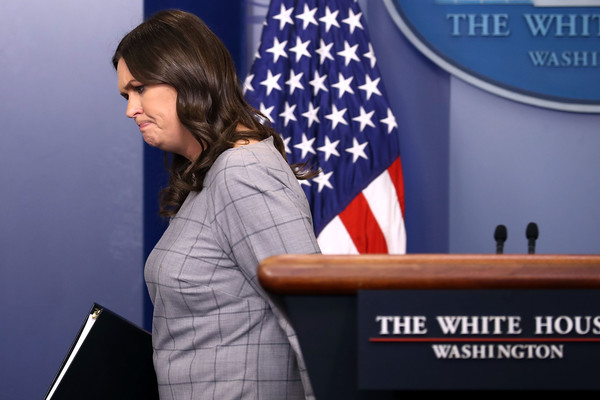 The announcement was not a surprise.

Sanders, like President Trump, heavily favored the network during her time in the White House, frequently making appearances on Fox even after she mostly stopped holding news briefings.

In a statement, Sanders said she is “beyond proud to join their incredible stable of on-air contributors.”

An original member of Trump’s White House staff, Sanders served a rocky tenure, often clashing with reporters and forcefully attempting to shut down any criticisms of the president.

In one instance, after CNN reporter Jim Acosta angered the president, she suspended his White House media pass.

Traditional White House news briefings dwindled under her management, although she did continue to regularly brief reporters in the White House driveway after her Fox News appearances.

She was also embroiled in controversy after the Mueller report alleged that she had lied in a statement to the media when she said “countless” agents had complained about former FBI Director James Comey, thereby justifying his firing.

Throughout her 2½ years in the White House, Sanders remained a staunch defender of Trump and maintained a close working relationship with the president up until her exit in June, even appearing emotional when speaking about her resignation onstage with Trump at an unrelated event.

“I’ve loved every minute, even the hard minutes,” she said at the event. “I love the president. I love the team that I’ve had the opportunity to work for.”

Sanders, the daughter of former Arkansas Gov. Mike Huckabee, joined the White House after serving as a senior adviser on Trump’s 2016 campaign.

She has indicated that she might consider running for governor in Arkansas, a possibility the president has enthusiastically embraced.