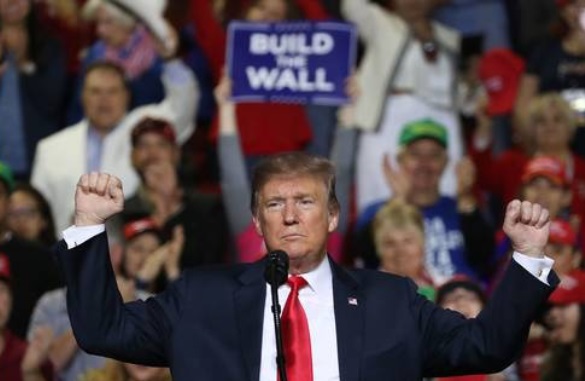 President Trump pledged total support of the federal government Saturday as city officials in El Paso scrambled to respond to a deadly mass shooting at a Walmart.

Today he announced he would travel to the city on Wednesday to show his support.

But El Paso officials have been critical of Trump in recent months for his refusal to pay a $470,000 debt owed to the city for transportation and security services during his February campaign rally.

For six months, the city has sent Trump’s campaign invoices for services provided by city departments — including police, buses, the health department and others — but has not gotten a response.

“We are contacting you regarding the past due invoice(s) listed above,” a letter sent by the city in May reads. “We realize this may been a oversight on your part; however, your account with the city of El Paso is extremely past due… Further, the city may choose to not enter into a contract with an individual that is indebted to the city for more than $100.”

“It shows a lack of concern for the community and the tax paying voters of El Paso,” City Councilwoman Alexsandra Annello told the local newspaper in June. “President Trump has in many ways, over the last year, put a financial burden on this community and has yet to show us the respect we deserve. It is clear that our borderland is not a priority of the president.”

If the bill isn’t paid by Trump’s campaign, the city has said it will absorb the costs.

El Paso was overwhelmed with injuries, media attention and people looking to donate blood after the Saturday shooting.

Doctors, police officers and other city staff are working around the clock to respond.

Trump brought thousands of supporters to the Sun City in February for a “Make America Great Again” rally.

He paid his $21,000 bill earlier this summer, the El Paso Times reported.

Rep. Veronica Escobar said Monday that Trump “is not welcome” in her hometown of El Paso.

“From my perspective, he is not welcome here. He should not come here while we are in mourning,” Escobar, a Democrat whose district includes nearly all of El Paso, told MSNBC’s “Morning Joe.” “I would encourage the president’s staff members to have him do a little self-reflection. I would encourage them to show him his own words and his actions at the rallies.”