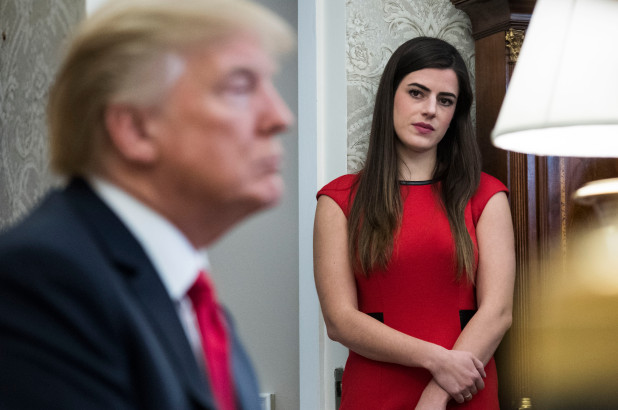 President Trump’s personal assistant, Madeleine Westerhout, whose office sits in front of the Oval Office and who has served as Trump’s gatekeeper since Day 1 of his administration, was forced to resign suddenly yesterday.

Now we know why.

Westerhout was fired after bragging to reporters that she had a better relationship with Trump than his own daughters, Ivanka and Tiffany Trump, and that the president did not like being in pictures with Tiffany because he perceived her as overweight.

The critical comments happened at an off-the-record dinner that Westerhout and deputy White House press secretary Hogan Gidley held earlier this month with reporters who were covering Trump’s vacation at his golf club in Bedminster, New Jersey.

Westerhout also jokingly told the journalists that Trump couldn’t pick Tiffany out of a crowd.

“She had a couple drinks and in an uncharacteristically unguarded moment, she opened up to the reporters,” the person said.

The breach of trust meant immediate action: Westerhout was fired immediately and was not be allowed to return to the White House today.

As such, Trump at first viewed her warily, as a late convert to his cause who could not be trusted.

But some of Trump’s top officials — like John Kelly, who has since left as chief of staff — tried to turn Westerhout into an ally who could help them manage Oval Office traffic.

They hoped that she could block individuals from reaching the president on the phone or in person, and that she would report back on the calls and meetings that made it through.

Westerhout’s public displays of loyalty ran her afoul of the Office of Special Counsel, which reprimanded her earlier this year for violating the Hatch Act, a 1939 law that prohibits federal officials from engaging in overtly political activity in the course of their official duties.

And as one of a dwindling number of officials to have served in Trump’s White House since its earliest days, she was an important source of continuity for a tumultuous presidency.

“Madeleine is the key,” Trump told the Washington Post in a 2018 interview. “She’s the secret.”

The Aug. 17 dinner, which took place at the restaurant inside the nearby Embassy Suites hotel and included the Washington Post’s Phil Rucker, Bloomberg’s Jennifer Jacobs, Reuters’ Steve Holland and the Wall Street Journal’s Andrew Restuccia.

White House staffers having off-the-record dinners or drinks with reporters has long been a commonplace practice when a president is traveling.

Arthur Schwartz, a confidant of Donald Trump Jr. who spars frequently with the media, accused Rucker on Friday in a series of tweets of having “burned” Westerhout and of violating the Washington Post’s policies on sourcing.

“Philip Rucker is one of the best and most scrupulous reporters in the news business,” said Steven Ginsberg, national editor at the Washington Post, in an emailed statement. “He has always acted with the utmost honor and integrity and has never violated Washington Post standards or policies.”

Other officials were wary of Westerhout, who did not work on the campaign and joined Trump’s team after the 2016 election.

She kept largely to herself, several noted, but frequently posted pictures on Instagram of life in the White House.