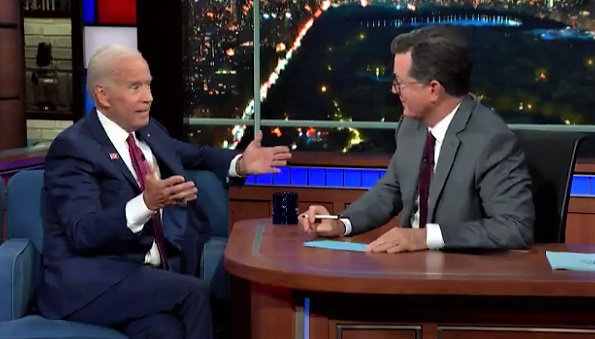 Biden argued that he’s made verbal slips, as he said all politicians have, but the “essence” of what he’s said has been true and the mistakes have not been on substantive issues.

“In the last few weeks you’ve confused New Hampshire for Vermont, said Bobby Kennedy and MLK were assassinated in the late 70s, assured us ‘I’m not going nuts,’ — follow up question, are you going nuts?” Colbert asked Biden in a clip released on Twitter ahead of the interview.

“Look the reason I came on the Jimmy Kimmel show is because I’m not,” Biden joked.

Biden told Colbert he think it’s fair for media and voters to “go after” him over the gaffes, but said his gaffes have not been issue-based.

“I think it’s fair to go after a political figure for anything, okay. I mean we stand up, it comes with the territory, but here’s the deal any gaffes I have made, and I have made gaffes like every politician I know has, have been not about a substantive issue, have been about I’m trying to talk about what other people have done,” Biden said.

TONIGHT: Stephen holds former VP @JoeBiden‘s feet to the fire over his recent string of gaffes on the campaign trail. #LSSC pic.twitter.com/qQ8rrvdGgb

He pointed to a story he’s told on the campaign trail that The Washington Post recently reported was inaccurate the way Biden has told it.

“Here’s the deal because I was not talking about me, I was praising what the valor of all these people out there that I’ve visited and over 30 visits in Afghanistan and Iraq and I’ve watched these people, and I’ve watched what they’ve done,” Biden responded, as he continued to retell portions of the story of the young man who did not want him to pin the medal on him over guilt of his friend being killed.

Biden said the “essence of it is absolutely true.”

“I don’t get wrong things like there is, we should lock kids up in cages at the border,” he added.