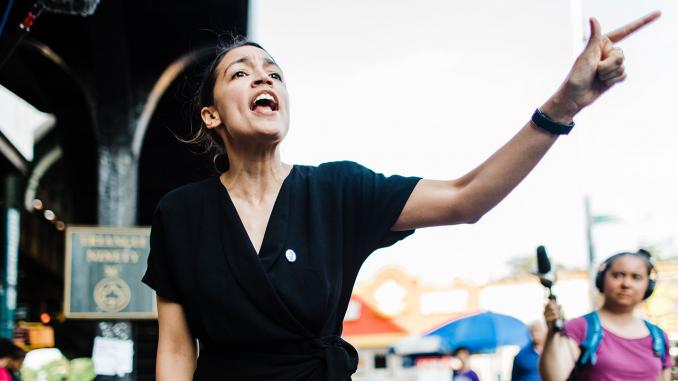 Rep. Dan Lipinski is shrugging off the endorsement of his liberal challenger by Rep. Alexandria Ocasio-Cortez, saying the progressive star’s backing of his “extremist” opponent won’t help knock him out of the Chicago-area seat.

“I think it’s always a bad idea for Democrats to go after Democrats, especially incumbent members of Congress. But I know that it happens,” Lipinski said.

“It’s unfortunate. We should all be pulling together against President Trump right now. It’s bad when we’re fighting each other and pulling in different directions.”

But Ocasio-Cortez didn’t shy away from her endorsement of Lipinski’s opponent, Marie Newman, telling reporters this week she’s likely to back other primary challengers to her Democratic colleagues in the coming months.

She is the left’s version of the Tea Party which worked in several election cycles to run more conservative candidates in GOP leaning districts.

“We are taking a look into how we can be helpful in transforming the party in 2020,” Ocasio-Cortez said. “I don’t have a quota or a plan but we’re certainly kind of actively looking through and see where we can bring in new people to this institution.”

Newman is challenging Lipinski for a second time after narrowly losing to him in a nasty primary battle last year that became a proxy war for the larger ideological debate simmering within the party.

Lipinski, one of the most conservative members of the Democratic Caucus, is a top target for liberal activists looking to steer the party left.

Democratic Rep. Katie Hill, who flipped a red seat in southern California, survived a tough primary in which Justice Democrats backed one of her competitors.

“It’s a dangerous strategy,” Hill said of the group’s decision to single out incumbents. “Right now I think we should be focused entirely on keeping the people who just got elected, keeping our majority, winning the Senate and getting Trump out of the White House.”

Justice Democrats’ strength lies in its combative tactics, social media presence and connection to Ocasio-Cortez — not its fundraising prowess.

That doesn’t count the nearly $900,000 it helped candidates raise through small-dollar fundraising emails.

Barack Obama warned in April that progressives risk creating a “circular firing squad” at a time when prospective presidential candidates are competing fiercely against each other to run against Donald Trump.

“One of the things I do worry about sometimes among progressives in the United States,” he said, “maybe it’s true here as well, is a certain kind of rigidity where we say, ‘Uh, I’m sorry, this is how it’s going to be’ and then we start sometimes creating what’s called a ‘circular firing squad’, where you start shooting at your allies because one of them has strayed from purity on the issues.

“And when that happens, typically the overall effort and movement weakens.”