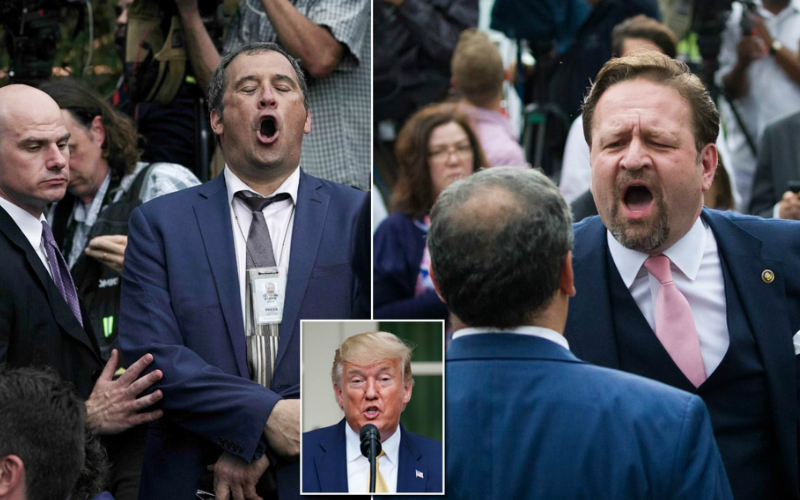 Brian Karem, a correspondent for Playboy Magazine and a regular contributor to CNN, will immediately regain access to the White House.

Today, a D.C. federal judge granted his motion for a restraining order amidst a fight over whether Donald Trump’s White House improperly stripped him of a hard pass.

Throughout Trump’s term in office, his administration has been hostile to members of the media in the face of unflattering coverage.

In many ways, Karem’s dispute amounts to the latest test of whether Trump is capable of learning from prior situations as this is hardly the first time the White House has been sued for taking punitive action towards a reporter.

Here, Karem claims that the White House is violating First Amendment rights, and just as importantly, denying him due process.

“Karem has, at this early stage of the proceedings, shown that he is likely to succeed on this due process claim, because the present record indicates that Grisham failed to provide fair notice of the fact that a hard pass could be suspended under these circumstances,” states the opinion from U.S. District Court Judge Rudolph Contreras. “Meanwhile, Karem has shown that even the temporary suspension of his pass inflicts irreparable harm on his First Amendment rights. The Court therefore grants Karem’s motion for a preliminary injunction and orders that his hard pass be restored while this lawsuit is ongoing.”

Karem’s lawsuit centers on what happened in the aftermath of a July 11 “Social Media Summit” where Trump convened conservative bloggers and social media celebrities.

That day, Trump followed the summit by giving prepared statements in the Rose Garden. Karem asked whether the president would take questions.

Trump ignored him as some of the attendees began heckling.

Karem then remarked, “This a group of people that are eager for demonic possession,” which he later characterized as Rodney Dangerfield-style comment that elicited laughs.

But Sebastian Gorka, one of Trump’s advisors, wasn’t amused, and in the Rose Garden, the two came to odds.

“Come on over here and talk to me, brother, or we can go outside and have a long conversation,” responded Karem.

“Are you threatening me now in the White House?” asked Gorka.

On Aug. 16, White House press secretary Stephanie Grisham notified Karem that his hard pass was being suspended for breaching standards of decorum.

A letter informing Karem of the decision detailed his “disruptive and unprofessional behavior,” including how he “openly insulted the President’s invited guests” and “verbally accosted” Gorka.

Within days, Karem filed his suit, which has both sides pointing to two past legal situations as being particularly instructive.

In the late 1970s, Robert Sherrill, then a Washington correspondent for The Nation, had his application for a White House pass rejected.

Sherrill’s search for the reason why and objection to the denial culminated in a victory for him at the D.C. Court of Appeals, which decided that First Amendment rights were implicated in a refusal to grant a press pass and that any refusal “must be based on a compelling government interest.”

The decision in Sherrill v. Knight faulted the White House for not having a process for press applications that included written notice spelling out reasons for rejection plus opportunity for response.

The second bit of precedent occurred less than a year ago when CNN’s Jim Acosta had his own press pass suspended upon a contentious Trump news conference where Acosta refused to give up the microphone.

After CNN sued, the White House backed down, restoring Acosta’s press pass and advising, “Should you refuse to follow these rules in the future, we will take action.”

As a result of the Acosta case, according to the White House, Karem and other correspondents were provided notice that they were expected to abide by “professional journalistic norms” when on White House grounds.

According to the White House, there’s no First Amendment right to “come onto the White House campus, loudly insult the President’s invited guests, disrupt official events, and even instigate physical confrontations.”

At a Aug. 27 court hearing, Judge Contreras was somewhat unsettled by Karem’s behavior.

Responding to his lawyer’s suggestion that Karem had acquitted himself reasonably given the circumstances, the judge said, “I’m not sure I’d go so far to say he dealt with it as best he could.”

But to Karem as well as various press groups supporting him in amicus briefs, the White House’s explanations for the suspension were unsatisfactory and its move to interfere with his professional responsibilities as a reporter was unconstitutional.

They told the judge that “explicit and meaningful standards” were indeed required and that Karem never got fair opportunity to rebut the charge against him. While he was able to respond to notice of the charge that he had been disruptive, Karem complained of not being provided word of the evidence against him including an eyewitness statement from an anonymous Secret Service agent.

The dispute is also colored by context.

“Defendants are oblivious to the immense irony and conflict between their punishing Mr. Karem for a breach of ‘decorum’ for allegedly ‘insulting’ guests at a press event, while at the same time endorsing acts of violence against reporters and condemning the media as ‘the enemy of the people,'” Karem’s attorney Ted Boutrous told the judge. “Given their own past statements and actions, Defendants cannot credibly claim that they are sincerely intending to police norms of etiquette and good behavior, rather than inflict punishment aimed at scoring political points and sending a message to reporters whose coverage they dislike to deter them from doing their jobs.”

At the hearing, Boutrous added that the dispute “raises really important issues that go far beyond this case,” that the action against Karem is “part of a campaign President Trump has been very open about that he’s waging on ‘fake news’ and the ‘lamestream media.’”

While the case is not over, Judge Contreras sees merit to Karem’s position as well as the prospect of irreparable harm and has decided to pause any suspension while the case plays out.