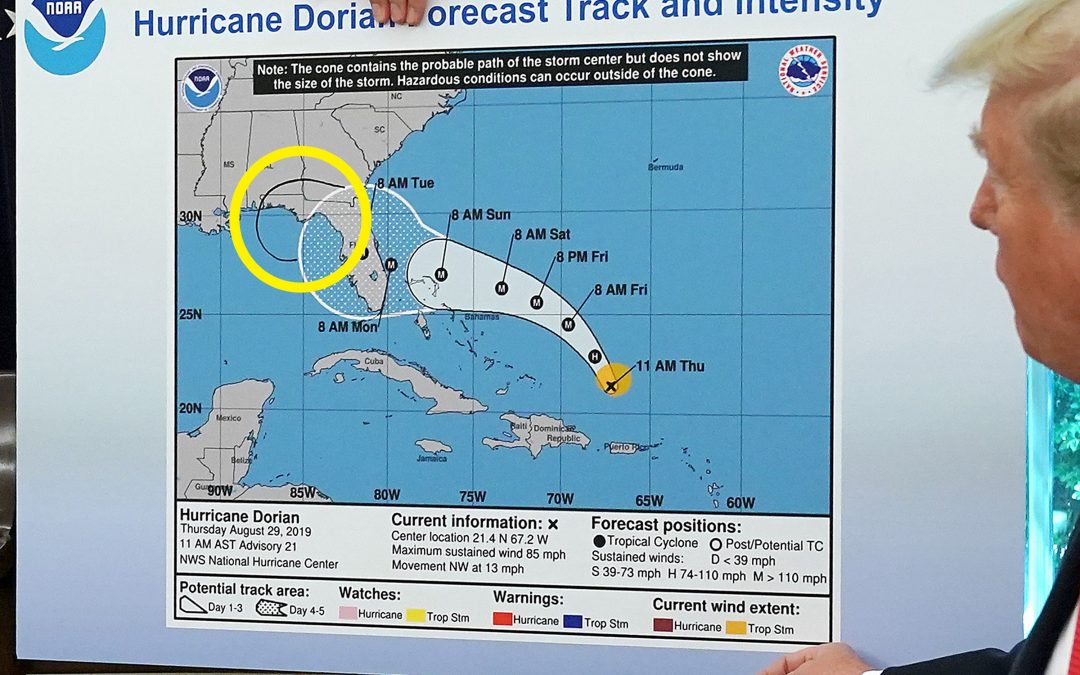 President Trump today showed a doctored map of Hurricane Dorian that is illegal and includes fines and possible jail time.

It happened as the White House attempted to retroactively justify a tweet that Trump issued over the weekend in which he warned, erroneously, that Alabama would be affected by Hurricane Dorian.

In a White House video released today, Trump displays a modified National Hurricane Center “cone of uncertainty” forecast, dated from 11 a.m. on Aug. 29, indicating Alabama would in fact be affected.

The graphic appears to have been altered with a Sharpie to indicate a risk the storm would move into Alabama from Florida. 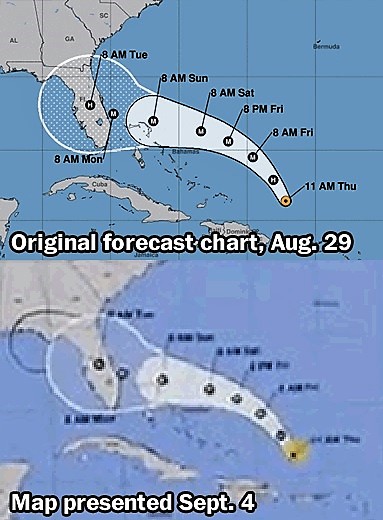 “We had, actually, our original chart was that it was going to be hit — hitting Florida directly,” Trump said as he displayed the graphic from Aug. 29, which now includes an added appendage extending the cone into Alabama. “That was the original chart,” Trump said. “It could’ve, uh, was going towards the Gulf,” Trump explained in the video.

Asked about the altered hurricane forecast chart at a White House event this afternoon, Trump said his briefings included a “95 percent chance probability” that Alabama would be hit.

When asked whether the chart had been drawn on, Trump said: “I don’t know; I don’t know.”

Trump’s tweet on Sunday came as Dorian was hitting the Bahamas as a high-end Category 5 hurricane, and the tweet sparked enough public alarm that it prompted the National Weather Service in Birmingham, Ala. to bluntly tweet 20 minutes later: “Alabama will NOT see any impacts from #Dorian.”

Alabama will NOT see any impacts from #Dorian. We repeat, no impacts from Hurricane #Dorian will be felt across Alabama. The system will remain too far east. #alwx

Photos posted on the White House’s Flickr site reveal that Trump did receive the correct briefing on Aug. 29 from acting National Oceanic and Atmospheric Administration head Neil Jacobs, in which the National Hurricane Center’s forecast called for Dorian to hit Florida.

Alabama was never included in any National Hurricane Center forecast cone for Dorian.

It is not clear whether Trump was responsible for altering the forecast chart, but the modified photo appeared to show Alabama in Dorian’s eventual line of fire.

The National Hurricane Center’s text bulletin at that time included Florida in its discussion five times, but it did not mention Alabama.

Instead, the center urged caution from residents in “the Bahamas, Florida, and elsewhere in the southeastern United States.”

When Trump tweeted his original warning to Alabama, the concurrent National Hurricane Center forecast called for Dorian to pass off the Georgia coast, with the center of Dorian’s expected track passing 300 miles east of the Alabama border.

The far western extent of the cone was located more than 150 miles east of the Alabama border.

Per 18 U.S. Code 2074, which addresses false weather reports, “Whoever knowingly issues or publishes any counterfeit weather forecast or warning of weather conditions falsely representing such forecast or warning to have been issued or published by the Weather Bureau, United States Signal Service, or other branch of the Government service, shall be fined under this title or imprisoned not more than ninety days, or both.”

That law applies to what is now known as NOAA’s National Weather Service, which contains the National Hurricane Center.