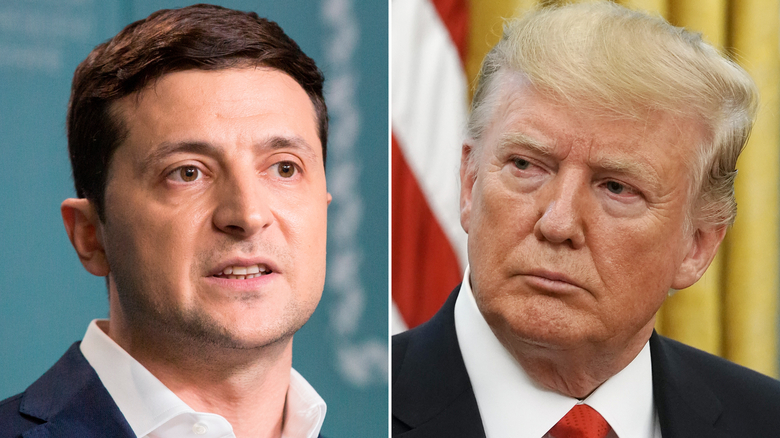 President Trump repeatedly pressured the president of Ukraine for cooperation with his political agenda in a July 25 call, urging his counterpart to start corruption investigations while stressing the United States’ role in military assistance for Kiev.

In a reconstruction of the call released by the White House, Trump urged President Volodymyr Zelensky to work with Attorney General William Barr on potential corruption investigations connected to former Vice President Joe Biden, a Democratic rival, and an unsubstantiated theory about stolen Democratic emails in 2016.

Zelensky reacted to Trump’s assertion that the United States had “done a lot for Ukraine” by saying that his country was ready to purchase Javelin anti-tank missiles from the United States for its long-running war against Russian-backed separatists in the country’s east.

“I would like you to do us a favor though,” Trump responded, pressing Zelensky to use Barr’s help in opening an investigation of a company involved in the beginnings of the F.B.I. inquiry of Russia’s 2016 election interference.

He also pressed Zelensky repeatedly to open an investigation of Biden and his family.

Both held the potential to benefit the president politically.

Trump’s suggestion that American law enforcement be directly involved and in contact with Ukraine’s government marks the first evidence that the president personally sought to harness the power of the United States government to further a politically motivated investigation.

The release of the conversation’s details marked a culmination of an extraordinary series of revelations that began in recent weeks with a whistle-blower’s private expressions of concern about Trump’s actions and prompted Democrats in Congress officially begin an impeachment inquiry that could result in the president’s removal from office.

After the whistle-blower raised concerns, the director of national intelligence and the inspector general for the intelligence community each referred the complaint for a possible criminal investigation into the president’s actions, according to a Justice Department official.

The five-page “memorandum of telephone conversation” distributed by the White House includes a cautionary note indicating that it was “not a verbatim transcript” but instead was based on “notes and recollections of Situation Room Duty officers” and national security staff.

The department’s criminal division reviewed the matters and concluded that there was no basis for a criminal investigation into Trump’s behavior.

Law enforcement officials determined that the reconstructed transcript of the call did not show that Trump had violated campaign finance laws by soliciting from a foreign national a contribution, donation or thing of value.

During the call, Trump told Zelensky that he should be in touch with both Barr and the president’s personal lawyer Rudolph W. Giuliani, according to the document, known among government officials as a “memcon.”

“There is a lot of talk about Biden’s son, that Biden stopped the prosecution, and a lot of people want to find out about that,” Trump said to Zelensky during the call, according to the memorandum.

“So whatever you can do with the attorney general would be great,” Trump told Zelensky, who later agreed to have the country’s new top prosecutor conduct the investigations Trump wanted.

“The next prosecutor general will be 100 percent my person, my candidate,” Zelensky assured the president. “He or she will look into the situation.”

The Justice Department said Wednesday that Barr was unaware that Trump had told Zelensky that he would contact him.

In a series of tweets today, Trump defended his discussion with Zelensky, quoting commentators who concluded that it did not contain evidence of a quid pro quo.

Trump and Giuliani have long pushed for Ukrainian officials to examine whether there was any improper overlap between Biden’s dealings with Ukraine while in office and his son’s position on the board of a Ukrainian energy company.

Trump specifically asked his Ukrainian counterpart to come to the aid of the United States by looking into the unsubstantiated theory pushed by Giuliani holding that Ukrainians had some role in the emails stolen from the Democratic National Committee.

“I would like to have the attorney general call you or your people and I would like you to get to the bottom of that,” Trump said on the call, which took place a day after Robert S. Mueller III testified to a congressional committee about his report on Russia’s election sabotage.

Trump told Zelensky that Mueller had delivered an “incompetent performance” and again pressed the Ukrainian president to pursue investigations for him. “Whatever you can do, it’s very important that you do it, if that’s possible.”

Trump’s allies argue that he was not exerting improper pressure on Zelensky, but mentioned Barr because the Justice Department was already reviewing the origins of the inquiry into Russia’s 2016 election meddling.

Administration officials briefed about a dozen Republican members of Congress at the White House before releasing the memorandum.

Trump briefly called into the meeting from New York, where he was attending the annual meeting of the United Nations General Assembly.

The president’s mentions of Barr and Giuliani were the most striking part of a half-hour conversation in which the two men discussed a series of issues.

But several times, Trump steered the conversation back to Barr, Giuliani and Biden.