As Trump Retreats From World, Russia Emerges As Powerhouse In Africa 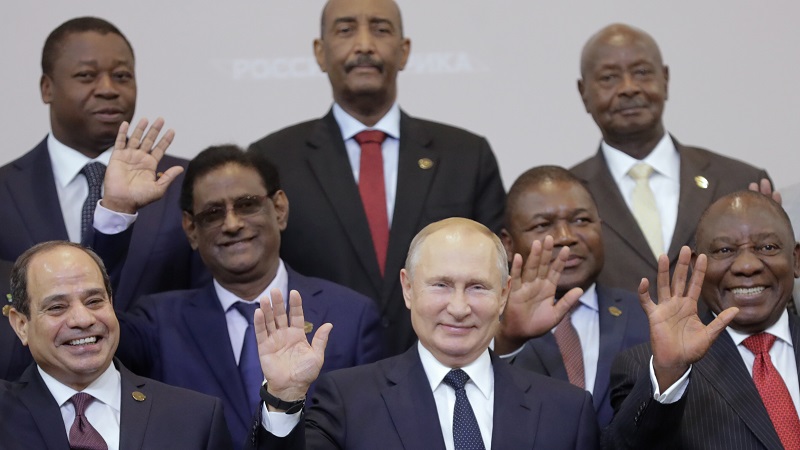 It has been a winning week for Russian President Vladimir Putin and his goal of expanding Moscow’s geopolitical clout.

On Tuesday, after U.S. troops withdrew, Putin and Turkish President Recep Tayyip Erdogan effectively carved up northeastern Syria between themselves, and the Russian leader solidified the position of his ally, Syrian strongman Bashar al-Assad.

Moscow has now replaced Washington as the key player in the Syrian conflict and cemented its status as a power broker in the Middle East.

But to lesser notice, Putin was working on another geopolitical front the same week: Africa.

Specifically, by hosting African leaders at a two-day summit in the Black Sea resort city of Sochi, the Russian president was trying to resurrect old bonds forged by the Soviet Union, as Putin seeks to re-create Russian influence around the world.

While the continent is not Moscow’s top foreign-policy priority, the Kremlin sees it as fertile ground to deepen ties with old and new partners—mixing politics and business to dodge Western sanctions and increase its geopolitical standing while scoring points at the expense of the United States.

“It’s a low-cost, high-profile way of elevating Russia,” said Joseph Siegle, the research director at the National Defense University’s Africa Center for Strategic Studies. “I don’t see much of a long-term plan for Africa, but this fits into broader Russian foreign policy where Moscow is following opportunities and posturing to be seen as a global power.”

As with Moscow’s resurgence in the Middle East, Russia’s increasing assertiveness in Africa is in part driven by a combination of Cold War legacy and openings created by Western introspection and miscalculation.

The Soviet Union was a dominant force in Africa during the Cold War, as it exploited the Western colonial legacy to back independence movements and build up influence on the continent, winning the support of populations and elites alike.

Following the collapse of the Soviet Union, many of those links broke down or faded as a depleted Russia curtailed its global ambitions, but Soviet support is still fondly remembered in many African capitals.

Similar to Cold War-era links to Syria and the Assad regime, rekindling and preserving Moscow’s Soviet-era links across Africa has been an urgent priority.

“For Russia, this return to Africa is like jumping on the last wagon of the train,” said Olga Kulkova, a senior research fellow at the Institute for African Studies of the Russian Academy of Sciences. “There are still some elites across the continent that have ties to the Soviet era, but the next generation doesn’t have the same links to Russia as before. So we need to take the opportunity to return now while there are still people with connections.”

It marks a stark transformation for Russia’s position in the region and around the globe as part of a concerted effort by the Kremlin to boost its standing in the world.

Following Russia’s 2014 annexation of Crimea and its military intervention in eastern Ukraine, Moscow was hit by sanctions as Western governments tried to isolate and pressure the Kremlin into changing its behavior.

But Russia’s push for global influence and stature has only accelerated as part of a foreign-policy pivot to find new opportunities around the world amid its deepening standoff with the West.

As with the Middle East, Russia’s return to Africa has also been boosted by a drop-off in attention from the United States under the Trump administration.

Former U.S. National Security Advisor John Bolton outlined a broad strategy for the continent in 2018 that centered on containing Chinese and Russian influences.

But a lack of top-level engagement, including several empty ambassador posts, and President Trump’s own harmful, racially charged comments have undercut U.S. support and created a vacuum for Russia to move into.

Similarly, the European Union has been mostly focused on curbing African migration to Europe, which has been a point of friction with African leaders.

Against this backdrop, Russia has deployed a loose strategy of self-enrichment, boosting military ties, deepening trade links, and selling its influence as a path for autocrats to stay in power and defy Western pressure.

Elements of Moscow’s intentions can already be seen across the continent and were disclosed this year in leaked documents published by an investigative unit funded by the exiled Russian tycoon Mikhail Khodorkovsky and shared with the Guardian.

According to the documents, Moscow’s goal is to “strong-arm” the United States and former colonial powers like the United Kingdom and France out of the region.

The documents highlighted involvement in 13 countries where Russia is engaged in information operations, development support, economic relations, arms sales, security, and other areas with the aim of creating strong and reliable ties with African leaders and to keep them in power.

According to the dossier, the portfolio for these activities is managed by Yevgeny Prigozhin, a Russian billionaire and Putin ally behind the Wagner mercenary group.

Wagner has been active in Ukraine and Syria and is offering security services to Sudan and the Central African Republic in exchange for gold and diamond concessions.

It is also active in other strategic or mineral-rich areas on the continent, such as the Democratic Republic of the Congo and Libya.

“There is certainly a receptive audience for the Russian playbook in Africa,” Siegle said. “For Russia, they are hoping that by legitimizing these leaders and helping them hang on, it can open up more political and financial opportunities in the future.”

Russia is already the largest arms exporter to Africa and has signed military cooperation agreements with at least 28 African governments.

Russian state-owned companies, which have largely been cut out of Western markets, are also investing in oil, gas, and nuclear energy, and Moscow increased its trade volume with Africa to $20 billion in 2018.

But Russia still lacks the financial means to match other external players, such as the European Union, the United States, and China, which pledged more than $60 billion in investment to Africa last year and is the continent’s leading economic force.

For Russia, as it hopes to replicate the cost-effective successes it achieved in the Middle East through resilience and skill, it will need to be “very strategic” in the coming years if it hopes to convert its growing presence in Africa into outsized influence, according to Alex Vines, the head of the Africa program at Chatham House.

“Russia came late to the party in Africa, and their reengagement is all still fairly new,” he said. “They’ll need to be smart and stick to the niche areas where they are strong or risk getting overstretched.”