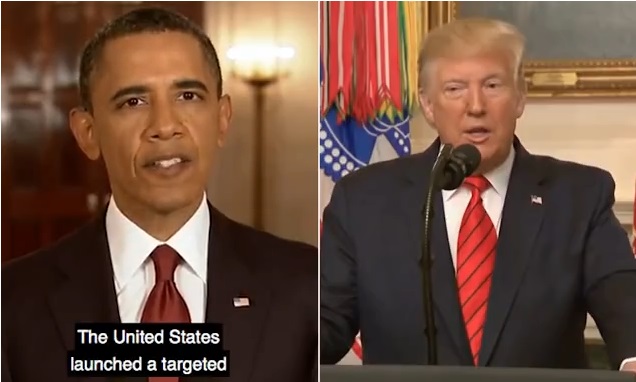 Jimmy Kimmel has ripped into Donald Trump by comparing his announcement of ISIS leader Abu Bakr al-Baghdadi’s death with that of Barack Obama’s statement on the killing of Osama bin Laden.

The late night host created a mash up of Trump and Obama’s televised national addresses following the killings of the Al Qaeda and ISIS leaders.

The hilarious clip has already been viewed more than 12 million times since Kimmel shared it online yesterday.

We mashed up @BarackObama’s Bin Laden speech with @RealDonaldTrump’s al-Baghdadi speech, and the results are amazing pic.twitter.com/Z8yfxSYWLd

Trump, however, spoke for 48 minutes on Sunday when he revealed that U.S. forces had killed Baghdadi in Syria.

The video mashing lines from each of their addresses highlighted how vastly different each leader chose to share news of the deaths.

The short clip started with Obama saying: ‘The United States has conducted an operation that killed Osama bin Laden.’

It was spliced with footage of Trump bluntly saying: ‘Abu Bakr al-Baghdadi is dead.’

The video jumped back to Obama speaking of the raid on bin Laden’s compound: ‘The United States launched a targeted operation against that compound.’

‘After a fire fight, they killed Osama bin Laden and took custody of his body,’ Obama said.

Trump followed up in the video saying: ‘He died like a dog.’

Obama went on to say: ‘His death does not mark the end of our effort.’

‘A beautiful dog, a talented dog,’ Trump said in reference to the K-9 fighter that was injured during the capture of Baghdadi.

‘We give thanks to the men who carried out this operation,’ Obama said.

Trump continued: ‘I don’t get any credit for this, but that’s OK. I never do. But here we are.’