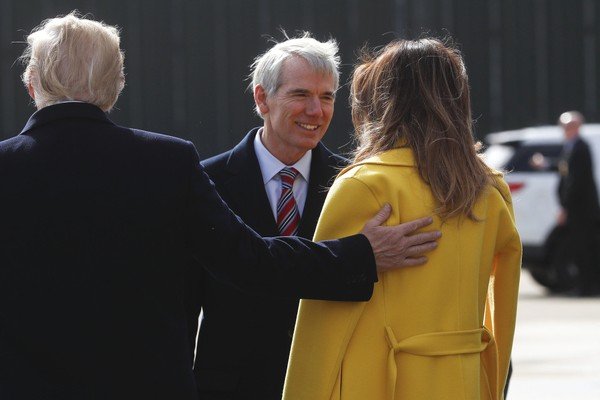 The longtime establishment Republican also disputed Trump’s characterization of an ousted Ukrainian as an aggressive battler of corruption, whom the president asserts was fired because he was digging into Biden and his son Hunter’s business dealings.

Portman was part of a bipartisan group of senators who wrote a letter to the Ukraine president in 2016 seeking reforms in the prosecutor’s office; today, Portman said the senators believed the prosecutor wasn’t doing nearly enough to root out corruption — not because he was doing too much.

And although Portman confirmed that Trump cited a lack of help from European nations as a reason for holding up aid authorized by Congress for Ukraine, the senator said he never heard that assertion until he spoke to the president personally Sept. 11.

Democrats have launched an impeachment inquiry into whether Trump delayed the $250 million in U.S. aid until the Ukrainian president probed the Bidens and a discredited conspiracy theory about the 2016 U.S. presidential election.

Portman also expressed dismay that Trump offered the services of U.S. Attorney General William Barr and the president’s personal attorney, Rudolph Giuliani, to help the Ukrainians in the twin probes.

While not backing impeachment at this point, Portman said a bipartisan group such as the Senate Intelligence Committee could look into the allegations surrounding Trump.

Portman said he first heard about Trump wanted a probe of the Bidens when it broke in the news a few weeks ago.

It certainly wasn’t an issue in early 2016, a couple of months after the vice president threatened to cut off a loan guarantee to Ukraine — a move Biden says was motivated by the concern of U.S. officials and others about Ukrainian corruption.

“To be honest with you, I didn’t remember that even being an issue. That was not why we were calling for reforms,” Portman said of the letter. “That didn’t even enter into our calculus as far as I know, on way or the other. It certainly didn’t into mine. Because that was something that nobody was even talking about.”