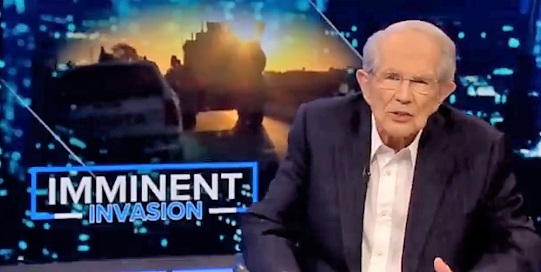 Evangelical and 700 Club host Pat Robertson has been a loyal Trump supporter, but today he took full aim at the president.

Amid a growing chorus of conservatives breaking with President Trump over his plan to withdraw U.S. troops from northeast Syria, Robertson added an apocalyptic sense of urgency to the matter, saying that Trump’s role as a president anointed by God is in jeopardy due to his decision.

“Ladies and gentlemen I want to say right now,” Robertson declared. “I am absolutely appalled that the United States is gonna betray those democratic forces in northern Syria, that we’re possibly gonna allow the Turks to come in against the Kurds.”

According to Robertson, Turkish President Tayyip Erdoğan is a “thug” and a “dictator.”

“To say he’s an ally of America is nonsense. He is in for himself,” Robertson said. “And the president who allowed [Jamal Khashoggi] to be cut in pieces is now allowing the Christians and the Kurds to be massacred by the Turks, and I believe — and I want to say this with great solemnity — the President of the United States is in danger of losing the mandate of Heaven if he permits this to happen.”

Robertson’s forceful condemnation of the president comes as Trump takes heat from some of his staunchest defenders over the Syria pullout.

You can watch the clip here:

Pat Robertson is “appalled” by Trump’s decision to withdraw U.S. troops from northern Syria: “The President of the United States is in great danger of losing the mandate of Heaven if he permits this to happen.” pic.twitter.com/YGeNYpbGrF

Former US Ambassador to the UN Nikki Haley also criticized Trump’s decision to remove US troops from Syria as a blow to America’s Kurdish allies.

“We must always have the backs of our allies, if we expect them to have our back. The Kurds were instrumental in our successful fight against ISIS in Syria. Leaving them to die is a big mistake. #TurkeyIsNotOurFriend,” tweeted Haley.

“We degraded ISIS using Kurd’s as the ground force. Now we have abandoned them & they face annihilation at the hands of the Turkish military. ISIS could now be reinvigorated when 1000’s of jailed fighters break out when the Kurdish guards are forced to leave to go fight Turkey,” he wrote on Twitter.

Sen. Lindsey Graham (R-SC) called the president’s move “irresponsible” and “unnerving to its core,” while Fox & Friends co-host Brian Kilmeade said the decision was “disastrous” as it would leave the Kurds to fend for themselves.