The WINNER From Trump’s Abandonment Of The Kurds? You Guessed It: Vladimir Putin 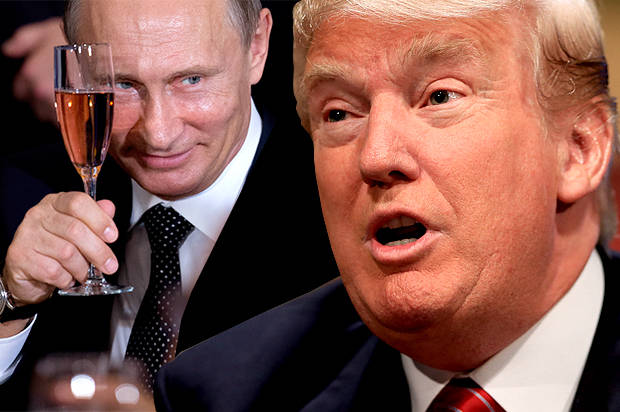 Vladimir Putin has won so much these past three years that he may get tired of winning.

Syrian President Bashar Assad — backed by his Russian patrons — moved on Monday to exploit the collapse of the US military presence in northeastern Syria by driving troops into the previously autonomous region managed by a Kurdish-dominated militia that had been under American protection for five years.

The unlikely sequence of events began earlier this month after President Trump ended US opposition to a Turkish offensive into Syria during a phone call with Turkish President Recep Tayyip Erdogan.

The call ended the US mission to fight the terrorist group ISIS and reduce Iranian and Russian influence in war-shattered Syria.

And it left Tehran, Moscow, and Damascus with a huge victory that required little more than watching the American presence disappear on its own.

Russian President Vladimir “Putin likely can’t believe his luck,” said a Western military official from the anti-ISIS coalition who recently served in Syria. “A third of Syria was more or less free of ISIS, and its security was good without any involvement of the regime or Russia, and now because of the Turkish invasion and American pullout, this area is wide open to return to government control.

“What was supposed to be a diplomatically complex issue that would have involved US and European military power suddenly got as simple as sending in tanks and units unopposed throughout the eastern third of Syria,” said the official, who did not have permission to speak to the media.

Syrian troops and their Russian advisers were invited into the enclave that Kurds call Rojava by the head of the Syrian Democratic Forces, a Kurdish-dominated militia that with US assistance had driven ISIS out of northeastern Syria, after the realization that the Americans would do nothing to protect the group from an invasion of Turkish troops and Syrian rebel proxies along the border.

Mazlum Kobani, the SDF commander, defended the decision to partner with the Syrian government and its Russian backers in a statement explaining that the group was left without a choice in the face of Turkish aggression.

“We know that we would have to make painful compromises with Moscow and Assad,” he said. “But if we have to choose between compromises and the genocide of our people, we will surely choose life for our people.”

The effect on Sunday was almost immediate. Syrian military units entered the area, driving toward the northern border and a possible confrontation with Turkish forces, as about 1,000 American special operations troops planned a hasty exit from the battlefield.

Syrian government media and Kurdish SDF sources confirmed that the Syrian troops would take control of the cities of Manbij and Kobani before either could be occupied by the Turks and their proxies.

At least part of the US presence appeared to be in disarray as Turkish troops and proxies took control of key roads and population centers in a 20-mile band along the border. Two US outposts in the western portion of the now contested border region appeared to have been cut off from other US units by road, leaving about 100 troops at least temporarily unable to move as they coordinated in an increasingly complicated battlespace.

“The US patrols from Kobani have been cut off from the eastern half of Rojava where we expect them to exit Syria into [northern] Iraq,” said an SDF commander reached in Kobani. “We cannot help them. They are negotiating with the Turks.”

Putin, Assad, and Iran had long demanded the US leave. Now it has.

Syrian government troops entering Rojava without a fight represents a massive victory for not only Assad but Putin and the Iranians, who had long demanded the Americans withdraw from the strategically critical corridor that links northern Iraq with eastern Syria.

With the Americans out of the way, the portion of government-controlled Syria is likely to increase by about a third, including key ground transport lines and the large oil fields around Deir al-Zour.

“Putin continues to get whatever he wants and generally doesn’t even have to do much,” the NATO official said. “He got to sit back and watch the Turks and the Americans unravel five years of success, and not only did it not cost him anything, he didn’t even have to try to make it happen. Small wonder he’d interfere on Trump’s side in an election.”