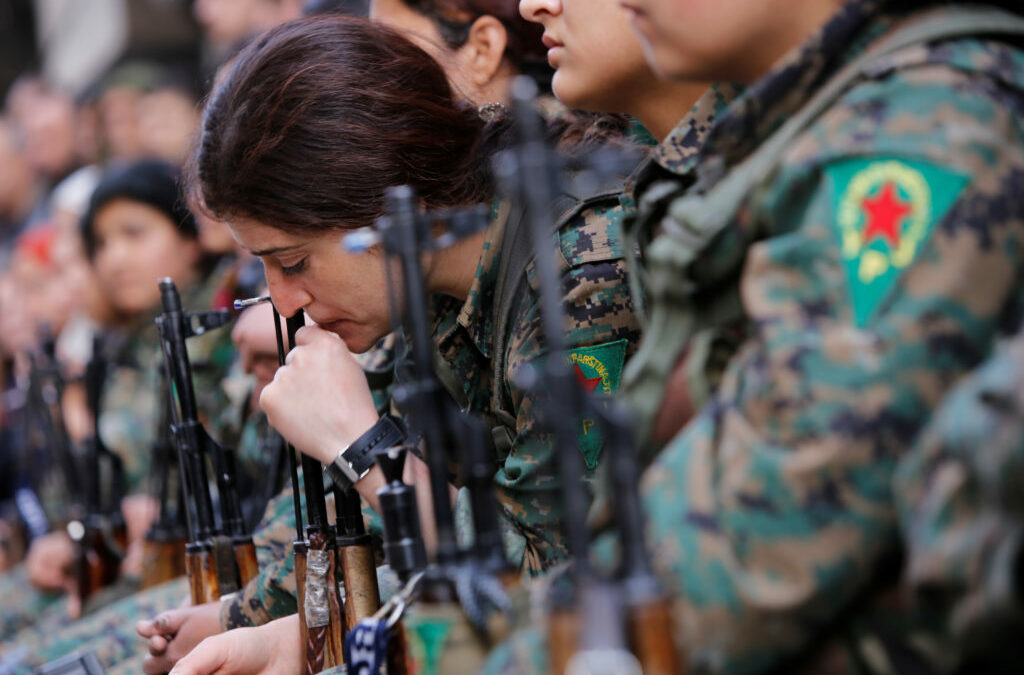 U.S. Kurdish allies say President Trump’s decision to pull troops from the Syrian-Turkish border is “shocking” and deflating — and they warn that the U.S. is duplicating a mistake it made in Iraq, where it has ceded partial control to Iran.

Within hours of the announcement from the White House, local Kurdish forces on the ground confirmed that U.S. soldiers began leaving bases in Tel Abyad and Ras al Ayn, near the Turkish border.

The Syrian Democratic Forces — the blanket group that emerged four years ago, led by the Kurdish YPG as a trusted U.S. ally — reacted with deep dismay, saying it had hoped the U.S. “would fulfill its obligations to mediate a political solution from all sides to stop war.”

Instead of brokering that deal, the group says, the U.S. is abruptly withdrawing.

And it warns that the move will cause a new ethnic war to break out.

“There are ethnic minorities here like Armenians, Assyrians, Christians, Yazidi Kurds,” the SDF says, adding, “they are all in threat of being ethnically cleansed and this in turn will not lead to any political solutions.”

Sen. Lindsey Graham (R-S.C.) blasted the administration during an appearance on Fox News’s “Fox & Friends,” and in a tweet thread, calling it a “disaster in the making” and “shortsighted.”

“This is a disaster in the making,” Graham tweeted.

Graham has emerged as a vocal ally of Trump’s, but the two men have different foreign policy views.

Trump ran in 2016 pledging to pull back U.S. involvement in the Middle East, while Graham is viewed as a longtime defense hawk.

Senate Majority Leader Mitch McConnell (R-Ky.) signaled today that he thinks Trump should back down from the decision and warned him against making a “precipitous withdrawal.”

“I urge the President to exercise American leadership to keep together our multinational coalition to defeat ISIS and prevent significant conflict between our NATO ally Turkey and our local Syrian counterterrorism partners,” McConnell said in a statement.

Sen. Marco Rubio (R-Fla.), who serves with Graham on the Foreign Relations Committee, warned that pulling back troops in northern Syria would be a “grave mistake that will have implications far beyond Syria.”

“It would confirm #Iran’s view of this administration & embolden then to escalate hostile attacks which in turn could trigger much broader & more dangerous regional war,” Rubio added.

Sen. Mitt Romney (R-Utah), another member of the Foreign Relations Committee, also knocked Trump in the latest in a recent series of high-profile breaks with the president.

“The President’s decision to abandon our Kurd allies in the face of an assault by Turkey is a betrayal. It says that America is an unreliable ally; it facilitates ISIS resurgence; and it presages another humanitarian disaster,” Romney tweeted.

Sen. Susan Collins (R-Maine), who is up for reelection in 2020, added in a statement that it was a “terribly unwise decision by the President to abandon our Kurdish allies.”

Sen. Ben Sasse (R-Neb.) — who, like Collins, is up for reelection next year — urged Trump to reconsider the decision, which he characterized as a “retreat.”

“He needs to know that this bad decision will likely result in the slaughter of allies who fought with us, including women and children. I hope the President will listen to his generals and reconsider. And before Turkey butchers innocent Kurds, Erdogan should carefully consider his privileged status as a NATO member. The American people don’t partner with genocidal regimes,” Sasse said in a statement.

The senators were joined by several of their House colleagues, as well as former administration officials.

Rep. Liz Cheney (R-Wyo.), a member of House leadership who is weighing a Senate bid, called Trump’s decision a “catastrophic mistake that puts our gains against ISIS at risk and threatens US security.”

“This decision ignores lesson of 9/11. Terrorists thousands of miles away can and will use their safe-havens to launch attacks against America,” she added in a tweet.

“Not only will this decision further destabilize the region, it will make it more difficult for the U.S. to recruit allies & partners to defeat terrorist groups like ISIS,” she added.

Rep. Adam Kinzinger (R-Ill.) said withdrawing U.S. troops from the area would “abandon our friends and give Russia & Iran exactly what they want. This is wrong.”

Meanwhile, former U.S. Ambassador to the United Nations Nikki Haley called the Kurds “instrumental” against ISIS and said “leaving them to die is a big mistake.”

Foreign policy has been a rolling point of contention between Trump and GOP allies on Capitol Hill.

Republicans forced through new Russia sanctions in 2017 despite reported opposition from the White House, and Senate Majority Leader Mitch McConnell (R-Ky.) offered an amendment earlier this year warning the administration against withdrawing troops for Syria or Afghanistan.

But his decision earned support from Sen. Rand Paul (R-Ky.), who is viewed as an outlier within the Senate GOP caucus when it comes to foreign policy.

Around 1,000 U.S. troops have been deployed in northeastern Syria, where they work closely with the Kurdish YPG, which leads the Syrian Democratic Forces in the region.

The Kurds have proven to be among Washington’s most effective allies in the fight against ISIS.

Trump’s decision was widely viewed as an endorsement of Turkey’s planned military operation.

Turkey, which views the Kurdish forces a terrorist insurgency, has long been frustrated with the U.S. alliance with the group.

Graham warned in a tweet that if Trump followed through with the plan to pull back U.S. troops that he would introduce a resolution to try to formally oppose him.

“If this plan goes forward will introduce Senate resolution opposing and asking for reversal of this decision. Expect it will receive strong bipartisan support,” he wrote.

Graham added during his Fox News interview that he would also try to slap new sanctions on Turkey is they move troops into Syria.

“I hope I’m making myself clear how shortsighted & irresponsible this decision is in my view,” he said. “This to me is just unnerving to its core.”

Graham added that he would “do everything I can to sanction Turkey’s military and their economy if they step one foot into Syria.”