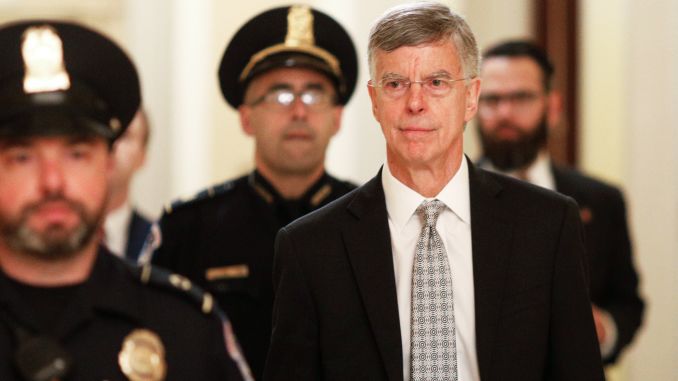 The senior U.S. diplomat in Ukraine told lawmakers today that President Trump made the release of military aid contingent on public declarations from Ukraine that it would investigate the Bidens and the 2016 election, contradicting Trump’s denial that he used the money as leverage for political gain.

The explosive, closed-door testimony from acting ambassador William Taylor. undermined the repeated statements of the president and the depositions of other administration officials, with the potential to reset the House impeachment probe of Trump.

Taylor, a seasoned diplomat, Army veteran and meticulous note taker, provided an expansive description of a series of events at the heart of an investigation that poses the most serious threat to the Trump presidency.

One Democrat described the testimony as “damning.”

In a 15-page opening statement, Taylor stood by his characterization that it was “crazy” to make the assistance contingent on investigations he found troubling.

He described how officials from the Pentagon, State Department, CIA and former National Security Adviser John Bolton tried unsuccessfully to get a meeting with Trump to release the aid.

He testified that Ukrainian officials were blindsided by the White House’s decision to release a rough transcript of Trump’s July 25 call with President Volodymyr Zelensky in which the president asked for a favor with “virtually no notice of the release and they were livid.”

Taylor walked lawmakers through a series of conversations he had with other U.S. diplomats who were trying to obtain what one had called the “deliverable” of Ukrainian help investigating Trump’s political rivals.

“In August and September of this year, I became increasingly concerned that our relationship with Ukraine was being fundamentally undermined by an irregular informal channel of U.S. policy-making and by the withholding of vital security assistance for domestic political reasons,” Taylor said.

Taylor’s testimony filled in some blanks about the activities of U.S. officials who appear to have sought Ukrainian help at the behest of Trump and his personal attorney, Rudolph W. Giuliani.

At issue is whether the White House conditioned military aid and a meeting between the two presidents on Zelensky’s cooperation, and whether that constitutes an abuse of Trump’s office.

Taylor contradicted earlier testimony from Gordon Sondland, Trump’s ambassador to the European Union, a key player in the effort to draw Ukraine into the election-related investigations.

Sondland told House investigators last week that he recalls “no discussions” with anyone at the State Department or White House about investigating former vice president and 2020 president candidate Joe Biden or his son, Hunter.

Taylor testified that Trump told Sondland himself in a September 7 phone call that Zelensky must “go to a microphone and say he is opening investigations of Biden and 2016 election interference, and that President Zelensky should want to do this himself.”

The contents of this conversation were given to Taylor by the White House official in charge of Europe, Tim Morrison, who after hearing that call notified Bolton and National Security Council lawyers, Taylor said.

In a crucial Sept. 8 telephone call, Taylor testified, Sondland “tried to explain to me that President Trump is a businessman. When a businessman is about to sign a check to someone who owes him something, he said, the businessman asks that person to pay up before signing the check.”

House Democrats are expected to use Taylor’s account of his conversations with Sondland to show that Trump had issued clear orders about what he wanted from Zelensky.

“During that phone call, Amb. Sondland told me that President Trump had told him that he wants President Zelensky to state publicly that Ukraine will investigate Burisma and alleged Ukrainian interference in the 2016 election,” Taylor testified.

Hunter Biden had been a board member of Burisma, a large Ukrainian gas company. Joe Biden is a 2020 Democratic presidential candidate.

“Amb. Sondland also told me that he now recognized that he had made a mistake by earlier telling the Ukrainian officials to whom he spoke that a White House meeting with President Zelensky was dependent on a public announcement of investigations — in fact, Amb. Sondland said, ‘everything’ was dependent on such an announcement, including security assistance,’” Taylor told House investigators.

“He said that President Trump wanted President Zelensky ‘in a public box’ by making a public statement about ordering such investigations.’”

An official working on the impeachment inquiry said today that Taylor is testifying under subpoena after the State Department attempted to block his appearance.

“The House Intelligence Committee issued a subpoena to compel his testimony this morning,” said the official, who requested anonymity to discuss the arrangements. “As is required of him, Ambassador Taylor is now complying with the subpoena and answering questions from both Democratic and Republican Members and staff.”

“It was just the most damning testimony I’ve heard,” Rep. Debbie Wasserman Schultz (D-Fla.) said in an interview partway into Taylor’s testimony.

“He drew a very specific direct line from President Trump to the withholding of foreign aid and the refusal of a meeting,” between Trump and the new Ukrainian leader, Wasserman Schultz said.

Taylor testified that he first learned about U.S. military aid being leveraged on a promise by Ukraine to investigate Trump’s political foes in an early September phone call with Morrison.

The top National Security Council official described how Sondland had told a Ukrainian official that “the security assistance money would not come until President Zelensky committed to pursue the Burisma investigation,” Taylor testified.

Taylor told lawmaker he was “alarmed” by the news.

“This was the first time I had heard that security assistance—not just the White House meeting—was conditioned on the investigations,” he told lawmakers.

The same day he texted Sondland to ask if this was correct, a message that is now already public: “We [are] now saying that security assistance and [a] WH meeting are conditioned on investigations?” he wrote.

Sondland responded telling Taylor to call him instead of texting.

A few days later, on Sept. 7, Taylor testified that Morrison related to him another conversation that Trump had with Sondland that gave him a “sinking feeling.”

Taylor also told lawmakers that Sondland had explained that Trump is a “businessman” and that when a businessman is about to sign a check to someone he asks for what he is owed.

Taylor scoffed at the notion that Ukraine “owed” anything to Trump.

After they hung up, Taylor sent Sondland a series of text messages saying lay out his concerns about holding up the military aide.

That’s when he wrote that “I think it’s crazy to withhold security assistance for help with a political campaign.”

Sondland responded five hours later after he spoke with Trump, saying there was “no quid pro quo’s of any kind.”

Taylor took the job on temporary assignment earlier this year after the sitting ambassador was removed, in what she told the committees was political retaliation by the Trump administration.

Taylor, a retired former ambassador to Ukraine and a foreign policy elder statesman, had exchanged text messages with two other diplomats in which he called it “crazy to withhold security assistance for help with a political campaign” and a “nightmare scenario.”

“It’s like if you have a 1,000 piece puzzle, which is what this is,” Wasserman Schultz said. “This filled in a ton of that puzzle.”

She and other Democratic lawmakers said Taylor’s morning testimony stood in contrast to the appearance last week of Sondland, a Trump donor and a key player in efforts to secure a statement from Zelensky committing to investigations.

Some accused the president of using race to attempt to distract from what Taylor may say.

Taylor said he agreed to go to Kyiv in June as a placeholder ambassador because he thought the U.S.-Ukraine relationship was at a critical moment following Zelensky’s election last spring.

Taylor said he wanted to reinforce U.S. support for Zelensky’s anti-corruption agenda and his independence from Russia, and that he worried that the relationship would drift after the forced recall of former ambassador Marie Yovanovitch.

He made it clear within the State Department that he objected to her treatment, and that he worried that the same external political “machinations” involving Giuliani that led to her ouster were still present, Taylor said.

Taylor said Secretary of State Mike Pompeo asked him to take the job with the assurance that “the policy of string support for Ukraine would continue and that he would support me in defending that policy.”

His testimony, much of it relaying on what appear to be detailed chronological notes, laid out how what he called the official and unofficial channels dealing with the Zelensky government began to diverge over the summer.

On July 21, four days before Trump and Zelensky had a phone call in which Trump asked Zelensky to conduct those investigations, Taylor exchanged text messages with Sondland.

Zelensky wants Ukraine to be “taken seriously” and not just serve as “an instrument in Washington domestic, reelection politics,” Taylor told Sondland.

And on Sept. 1, the day Vice President Pence was set to meet with Zelensky, Taylor again texted Sondland.

“Are we now saying that security assistance and WH meeting are conditioned on investigations?” Taylor asked.

“Call me,” Sondland replied, in what Democrats have said is probably an effort to prevent a paper trail.

On Sept. 8, Taylor and Sondland tried to get on the phone with Kurt Volker, then the special U.S. envoy for Ukraine, but Volker couldn’t hear the conversation.

“Gordon and I just spoke,” Taylor texted Volker. “I can brief you if you and Gordon don’t connect.” Taylor continued: “The nightmare is they give the interview and don’t get the security assistance. The Russians love it. (And I quit.)”

Taylor probably was referring to a potential statement to the press from the Zelensky government committing to the investigations. H

e was apparently worried that Zelensky would give in, but still not receive his promised aid, and that Russia would then use that opening to portray the new Ukrainian leader as a patsy.

Volker turned over copies of the text messages when he testified voluntarily earlier this month.

“The message to the Ukrainians (and Russians) we send with the decision on security assistance is key,” Taylor texted the next day. “With the hold, we have already shaken their faith in us. Thus my nightmare scenario.”

Sondland replied, saying that “we have identified the best pathway forward.”

“As I said on the phone,” Taylor replied, “I think it’s crazy to withhold security assistance for help with a political campaign.”

Sondland later testified that he was relaying only what Trump had told him in an intervening phone call.

“Bill, I believe you are incorrect about President Trump’s intentions,” he wrote. “The President has been crystal clear no quid pro quo’s of any kind. The President is trying to evaluate whether Ukraine is truly going to adopt the transparency and reforms that President Zelensky promised during his campaign.”

Democrats have pointed to that message, which differs in tone and detail from the chatty earlier exchanges, as an effort to establish a cover story.

Taylor is a former Army officer and Vietnam War veteran who has served in government posts in Iraq, Afghanistan and elsewhere. He is expected to return to his senior position at the U.S. Institute for Peace sometime next year.

His is the first of two planned closed-door depositions this week.

Laura Cooper, deputy assistant secretary of defense whose portfolio includes Russia and Ukraine, will testify in a closed session Wednesday, according to an official working on the process.