Bolton Knows About ‘Many Relevant Meetings’ On Ukraine, Lawyer Says 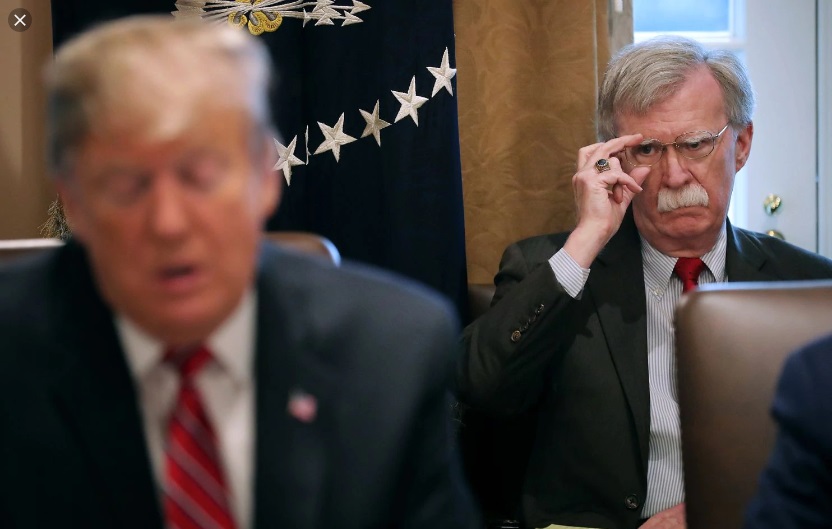 John Bolton, President Trump’s former national security adviser, knows about “many relevant meetings and conversations” connected to the Ukraine pressure campaign that House impeachment investigators have not yet been informed about, his lawyer told lawmakers today.

The lawyer, Charles Cooper, made that tantalizing point in a letter to the chief House lawyer in response to House committee chairmen who have sought Bolton’s testimony in their impeachment proceedings, arguing that his client would be willing to talk but only if a court rules that he should ignore White House objections.

Cooper did not elaborate on what meetings and conversations he was referring to, leaving it to House Democrats to guess at what Bolton might know.

Bolton has been one of the most anticipated witnesses because other current and former officials have described him as deeply disturbed by the effort to pressure Ukraine to provide incriminating information about Democrats to help the president’s domestic political prospects.

Bolton did not show up for a deposition scheduled on today because, his lawyer said, he wants a judge to determine whether he and his former deputy, Charles Kupperman, should testify in defiance of the White House. In effect, Bolton and Kupperman are asking for a court ruling on competing demands by the executive branch, which does not want them to testify, and the legislative branch, which does.

House Democrats complained that Mr. Bolton was stiff-arming them even though other national security officials have complied with subpoenas or requests for testimony, but the lawmakers have withdrawn a subpoena for Kupperman and indicated they would not seek one for Bolton because they said they did not want to get dragged into lengthy court proceedings.

Instead, Democrats have suggested that they may cite the refusal to testify by Bolton and Kupperman as evidence of obstruction of Congress by the president, which could form its own article of impeachment.

In representing Bolton and Kupperman, Cooper denied that they were trying to delay proceedings and insisted that their legal position was not coordinated with the White House.

Cooper argued that if the House was serious about an inquiry, then Bolton would be a logical person to question.

Bolton “was personally involved in many of the events, meetings, and conversations about which you have already received testimony, as well as many relevant meetings and conversations that have not yet been discussed in the testimonies thus far,” Cooper wrote in the letter.

Many witnesses who have testified so far have placed Bolton at the center of key events, describing him as exasperated by the efforts by people around the president — led by his personal lawyer Rudy Giuliani — to pressure Ukraine to investigate Democrats.

Bolton said he wanted nothing to do with the “drug deal,” as he put it, that other presidential advisers were orchestrating and called Giuliani a “hand grenade who’s going to blow everybody up,” according to testimony by Fiona Hill, the president’s former top Russia and Europe adviser.

Bolton directed Hill to report to a White House lawyer her conversation with Gordon Sondland, the ambassador to the European Union who was involved in the pressure campaign.

And he objected to Trump’s decision to suspend $391 million in security aid to Ukraine and the decision to call President Volodymyr Zelensky of Ukraine on July 25.

During that call, Trump asked Zelensky to “do us a favor” and investigate Ukrainian connections to Democrats in 2016 and former Vice President Joe Biden and his son Hunter Biden, even though other administration officials had concluded there was no basis for such investigations.

Unlike most of those who have testified so far, though, Bolton would bring knowledge of what the president himself said about the matter.

Most of the witnesses have described what people around the president said, but few recounted any direct conversations with Trump.

As his national security adviser who saw him daily, Bolton presumably could take investigators into the Oval Office as none of their witnesses have.

Trump seemed to reference that himself on Friday during comments to reporters before flying to Atlanta for campaign events.

“I’m not concerned about anything,” he said, shrugging off the impeachment inquiry. “The testimony has all been fine. For the most part, I never even heard of these people. I have no idea who they are. They are some very fine people. You have some never Trumpers. It seems that nobody has any firsthand knowledge. There is no firsthand knowledge.”