Ohio State goes into Saturday’s rivalry game as a favorite, but two national sports pundits have their money on the Michigan Wolverines in an upset.

#1 Ohio State is playing for a national title.

The Buckeyes have already clinched the East Division, but a statement win against the Wolverines might cement their status as a College Football Playoff team no matter what happens in the Big Ten Championship.

But first they have to deliver.

“I think it’s going to happen,” Finebaum said. “I was with Jim Harbaugh before I was against him. I know this sounds like we’re in a political debate here. But I think this has been the year everyone has been pointing toward. One reason I like Michigan in this game — they’re a good team but not as good as Ohio State — Ohio State is coming off the Penn State game. It’s an emotional win. It’s hard to play back-to-back heavyweights in college football.”

But it would not be a Finebaum reaction without a jab at the Wolverines fan base along the way.

The pressure is on Harbaugh, who is winless against the rival Buckeyes since he replaced Brady Hoke as head football coach.

“They hired him to beat Ohio State,” Finebaum said. “They hired him because the people at Michigan think they are superior to mankind. They’ve won 1.5 national championships in 70 years, and they brought Jim back because they couldn’t deal with Rich Rodriguez and Brady Hoke and all of the other people that have been there. … Jim comes in there and he’s one of the biggest names to ever play there, certainly the biggest coach they’ve ever produced. They expect it, and we’re now at the five-year mark.” 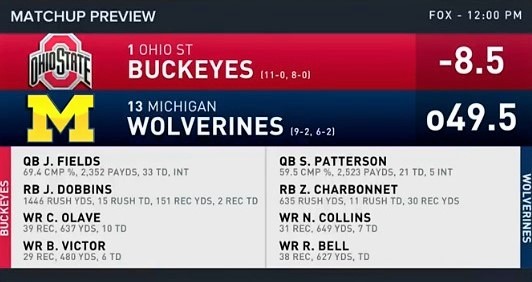 ESPN’s Mike Greenberg is calling it for the team up north too.

“Michigan is going to beat Ohio State at The Big House on Saturday.”

“I’ll take it a step farther,” Greenberg continued. “Harbaugh rewrites his entire narrative if he knocks this Ohio State team out of the playoff, which he might do. They might actually still make it with a loss against Michigan. But I’m telling you right now, he’s got a real good shot to beat them.”

The Wolverines head into kickoff as nine-point underdogs to undefeated Ohio State.

“I believe this Michigan team is better equipped to keep pace,” said Fornelli. “Not enough to win the game, but enough to stay within the spread. I think. Maybe.”