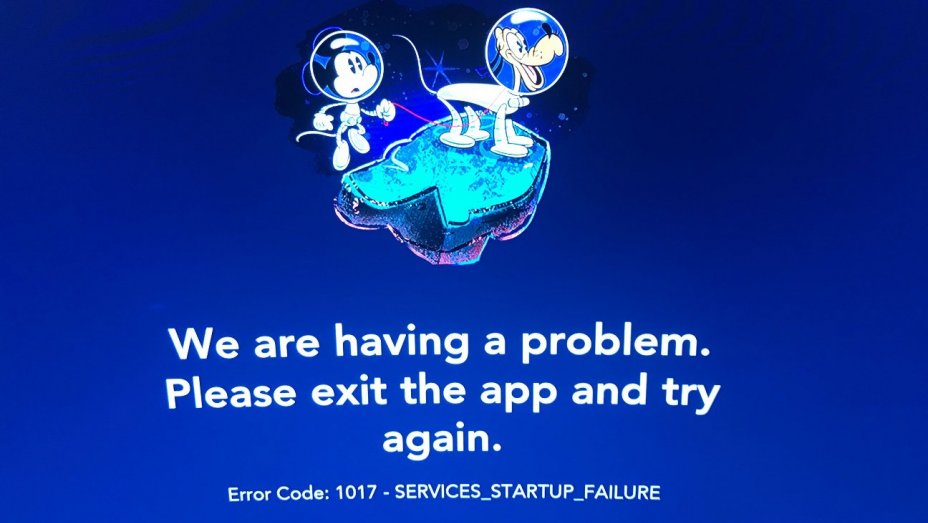 Executives at Netflix shuddered a bit this morning as the famous company featuring a mouse launched Disney+.

Disney’s long-awaited debut in the streaming media wars was hit with technical glitches that the company said were caused by higher-than-expected demand.

Some U.S. users were allowed to purchase Disney+ on their computer, but once paid for, the streaming service would not load on smart TVs or on the PlayStation app.

An error icon would appear each time, showing Mickey Mouse and his dog, Pluto, in space outfits.

It would then force users to exit the service.

It was unclear how many people successfully signed up and how many had difficulty accessing the $7-a-month Disney+, which features roughly 500 movies and 7,500 TV episodes from the company’s deep family entertainment catalog as well as new programming.

But investors appeared to welcome the comment that interest had topped Disney’s forecasts.

“The consumer demand for Disney+ has exceeded our highest expectations. … we are aware of the current user issues and are working to swiftly resolve them,” Disney said in a statement.

Some people who tried to access the service were greeted by an image of Mickey Mouse on a blue screen, with a message asking them to exit the app and try again.

Many others had trouble finding the Disney+ app in Apple’s App Store.

Disney+ is a streaming service we’re told will someday include every single movie Disney has made, along with all of Pixar’s output, plus Star Wars, plus all the Marvel films and so on.

But that’s a far cry from what’s being offered to customers who sign up today.

Perhaps worried that fans will be annoyed at what isn’t on the service yet — Where’s Pixar’s Up? And the Captain America films? And was Robert Altman’s Popeye as bad as they say? — the company refuses to make it easy to figure out what is on it.

They won’t give a list to journalists; there’s no database you can search.

Pressed for information, publicists point to a Twitter gush in which the company tweeted hundreds of pictures, each representing a single film with the kind of squashed-up quasi-posters you scroll through on Netflix.

Disney did make official today when the streaming service will mostly debut new episodes of original series, which at launch include the likes of The Mandalorian, the first-ever live-action Star Wars series; High School Musical: The Musical: The Series, the new scripted series set at the real-life East High featured in the High School Musical film franchise; and The World According to Jeff Goldblum, a docuseries from National Geographic.

“Beginning November 15, most new episodes of each series will premiere on Fridays at 12:01 a.m. PT,” Disney said, without detailing what the timing would be in other cases.

The firm had previously said that such shows as The Mandalorian would see new episodes released Fridays, but hadn’t given a time.

Considering the global expansion plans, some observers had wondered what time new content would debut on the service.

Disney+ is set to launch in Australia, New Zealand and Puerto Rico on Nov. 19.

Disney also previously said that on March 31, 2020, Disney+ will launch in markets across Western Europe, including the U.K., France, Germany, Italy, Spain and “a number of other countries in the region.”