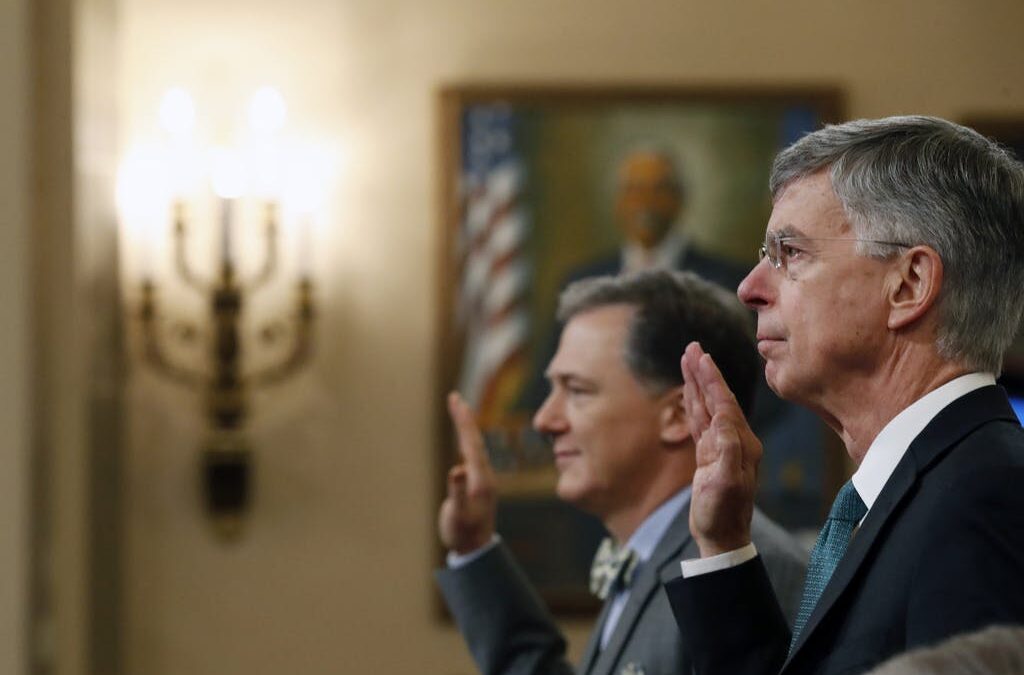 A top diplomat today tied President Trump more directly to the effort to pressure Ukraine to probe his political opponents, describing a phone call in which Trump sought information about the status of the investigations he had asked Ukraine to launch one day earlier.

William B. Taylor Jr., the acting ambassador to Ukraine, told lawmakers that the phone conversation between the president and U.S. Ambassador to the European Union Gordon Sondland in Kyiv was overheard by one of his aides.

The startling testimony revealed a new example of Trump’s personal involvement in the Ukraine pressure campaign that touched off the ongoing impeachment inquiry.

The probe has produced volumes of information about the actions of top Trump advisers to push Ukraine to pursue the investigations as U.S. security assistance was held up.

But the exact role of the president himself has remained an open question.

Until now, Trump has figured most prominently in two key moments: in a May 23 Oval Office meeting, in which he told U.S. officials to confer with his personal attorney Rudolph W. Guiliani on Ukraine policy, and in a July 25 phone call when he asked Ukrainian President Volodymyr Zelensky to look into investigations of Democrats.

Taylor kicked off the first public hearing of the impeachment inquiry by describing another act by Trump — a phone conversation he said the president had with Sondland a day after the call between the two presidents.

Taylor told lawmakers that his aide was accompanying Sondland during a July 26 visit to Kyiv when, in a restaurant, Sondland phoned Trump to update him about meetings he was having in the city, including a sit-down with a top Zelensky adviser.

Taylor said the aide overheard Trump ask Sondland about “the investigations” and that Sondland told the president the Ukrainians were “ready to move forward.”

Taylor said his aide later asked Sondland what Trump thought about Ukraine. Sondland said that Trump cares “more about the investigations of Biden, which Giuliani was pressing for,” Taylor testified.

Sondland attorney Robert Luskin said in an email to The Washington Post that “Sondland will address any issues that arise from this in his testimony next week.”

“The latest ‘evidence’ is an anonymous staffer who told someone he overheard someone else talking to POTUS on the phone,” she said in a statement. “All the ‘evidence’ in this case is 2nd and 3rd hand hearsay.”

Taylor’s account of the call undercuts Trump’s recent claims that he doesn’t know Sondland, whom he called a “really good man and great American” in a tweet last month.

But last week, Trump told reporters at the White House, “Let me just tell you: I hardly know the gentleman.”

The president’s comment came after Sondland reversed his previous testimony in the impeachment inquiry, acknowledging that he told a Ukrainian official in September that U.S. military aid would probably resume only if the government opened Trump’s desired investigations.

Taylor said he had not provided his account to investigators during his Oct. 22 closed-door deposition because his staff member only told him about the episode last Friday.

“I am including it here for completeness,” Taylor said of the information, adding that “it is my understanding that the committee is following up on this matter.”

Taylor said he also reported the story through counsel to the House Intelligence Committee and the State Department’s legal adviser.

The aide who overheard Sondland’s call with the president is embassy staffer David Holmes, who will testify Friday behind closed doors in the House’s impeachment probe, according to two people familiar with the investigation. Holmes is the top political affairs officer at the U.S. Embassy in Ukraine.

Until now, Trump has figured on the sidelines as much of the Ukraine narrative has spilled into public view — a player cited by others, whose direct actions have largely remained unknown.

That’s in part because top White House aides with firsthand knowledge of the president’s involvement, including acting chief of staff Mick Mulvaney and former national security adviser John Bolton, have so far refused to testify in the House inquiry.

Trump’s role in the effort to pressure Ukraine emerged in an Oval Office meeting on May 23, when he instructed a U.S. delegation that had just returned from Zelensky’s inauguration to “talk to Rudy,” referring to Giuliani, about Ukraine policy, according to witness testimony.

“Rudy had some bad issues with Ukraine, and until Rudy was satisfied, the president wasn’t going to change his mind,” Sondland said in a closed-door deposition.

Two months later, during the July 25 phone call, Trump told Zelensky that “whatever you can do” to investigate the Bidens “would be great” and urged him to speak with Giuliani and Attorney General William P. Barr.

Holmes’s deposition about the call between Sondland and the president is expected to take place on the same day that former U.S. ambassador to Ukraine Marie Yovanovitch testifies for the impeachment inquiry in a public hearing.