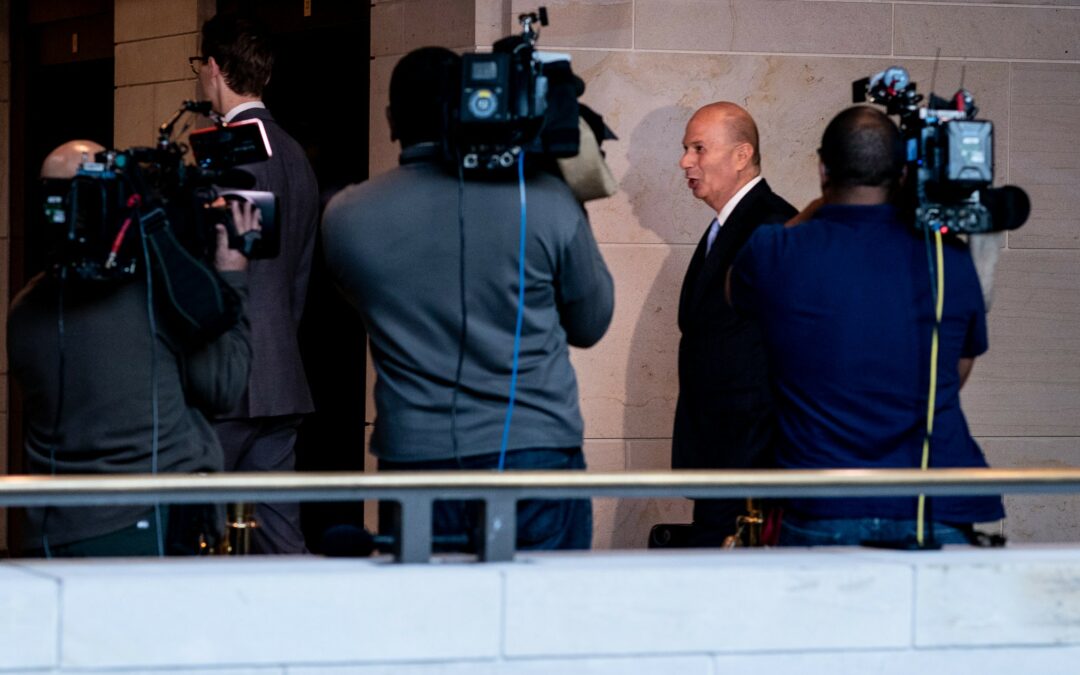 A critical witness in the impeachment inquiry offered Congress substantial new testimony this week, revealing that he told a top Ukrainian official that the country likely would not receive American military aid unless it publicly committed to investigations President Trump wanted.

The disclosure from Gordon Sondland, the United States ambassador to the European Union, in four new pages of sworn testimony released today, confirmed his involvement in laying out a quid pro quo to Ukraine that he had previously not acknowledged.

The issue is at the heart of the impeachment investigation into Trump, which turns on the allegation the president abused his power to extract political favors from a foreign power.

Trump has consistently maintained that he did nothing wrong and that there was no quid pro quo with Ukraine.

Sondland’s testimony offered several major new details beyond the account he gave the inquiry in a 10-hour interview last month.

He provided a more robust description of his own role in alerting the Ukrainians that they needed to go along with investigative requests being demanded by the president’s personal lawyer Rudy Giuliani.

By early September, Sondland said, he had become convinced that military aid and a White House meeting were conditioned on Ukraine committing to those investigations.

The additions Sondland made to his testimony were significant because they were the first admission by a senior figure who had direct contact with Trump that the military aid for Ukraine was being held hostage to the president’s demands for investigations into his political rivals.

A wealthy Oregon hotelier who donated to the president’s campaign and was rewarded with the plum diplomatic post, Sondland can hardly be dismissed as a “Never Trumper,” a charge that Trump has leveled against many other officials who have offered damaging testimony about his conduct with regard to Ukraine.

As such, Sondland’s new, fuller account is likely to complicate Republicans’ task in defending the president against the impeachment push, effectively leaving them with no argument other than that demanding a political quid pro quo from a foreign leader may be concerning, but — in the words of Trump himself — is not “an impeachable event.”

MSondland had said in a text message exchange in early September with William Taylor Jr., the top American diplomat in Ukraine, that the president had been clear there was no quid pro quo between the aid and investigations of former Vice President Joseph Biden, his son and other Democrats.

But Sondland testified last month that he was only repeating what Trump had told him, leaving open the question of whether he believed the president.

His addendum suggested that Sondland was not completely forthcoming with Taylor, and that he was, in fact, aware that the aid was contingent upon the investigations.

In his updated testimony, Sondland recounted how he had discussed the link with Andriy Yermak, a top adviser to President Volodymyr Zelensky of Ukraine, on the sidelines of a Sept. 1 meeting between Vice President Mike Pence and Zelensky in Warsaw.

Zelensky had discussed the suspension of aid with Pence, Sondland said.

“I said that resumption of the U.S. aid would likely not occur until Ukraine provided the public anticorruption statement that we had been discussing for many weeks,” Sondland said in the document, which was released by the House committees leading the inquiry, along with the transcript of his original testimony from last month.

The new information surfaced as the House committees also released a transcript of their interview last month with Kurt Volker, the former special envoy to Ukraine.

Rushing to complete their final round of requests for key witnesses before they commence public impeachment hearings, the panels also scheduled testimony on Friday by Mick Mulvaney, the acting White House chief of staff.

And two more administration witnesses who had been scheduled to testify on Tuesday — Michael Duffey, a top official at the White House budget office, and Wells Griffith, a senior aide to the energy secretary, Rick Perry — failed to appear.

In his new testimony, Sondland said he believed that withholding the aid — a package of $391 million in security assistance that had been approved by Congress — was “ill-advised,” although he did not know “when, why or by whom the aid was suspended.”

But he said he came to believe that the aid was tied to the investigations.

“I presumed that the aid suspension had become linked to the proposed anticorruption statement,” Sondland said.

In his closed-door interview last month, Sondland portrayed himself as a well-meaning and at times unwitting player who was trying to conduct American foreign policy with Ukraine with the full backing of the State Department while Giuliani, Trump’s lawyer, repeatedly inserted himself at the behest of the president.

He also said repeatedly that he could not recall the events under scrutiny, including details about the Sept. 1 meeting, according to the 375-page transcript of his testimony.

But some Democrats painted him as a lackey of Trump’s who had been an agent of the shadow foreign policy on Ukraine, eager to go along with what the president wanted.

They contended that Sondland had deliberately evaded crucial questions during his testimony.

And other witnesses have pointed to him as a central player in the irregular channel of Ukraine policymaking being run by Trump and Giuliani, and the instigator of the quid pro quo strategy.

In the addendum, Mr. Sondland said he had “refreshed my recollection” after reading the testimony given by Taylor and Timothy Morrison, the senior director for Europe and Russia at the National Security Council.

Morrison, the National Security Council official, testified last week that it was Sondland who first indicated in a conversation with him and Taylor on Sept. 1 that the release of the military aid for Ukraine might be contingent on the announcement of the investigations, and that he hoped “that Ambassador Sondland’s strategy was exclusively his own.”

Sondland’s new testimony contradicted the notion that he was a lone wolf pushing the quid pro quo idea himself, and portrayed him instead as just the messenger who had discovered there was a linkage between the aid and the investigations and articulated it to others.

He said it “would have been natural for me to have voiced what I presumed” about what was standing in the way of releasing the military assistance.

Sondland originally testified that Trump had essentially delegated American foreign policy on Ukraine to Giuliani, a directive he disagreed with but still followed.

He said that it was Giuliani who demanded the new Ukrainian president commit to the investigations, and that he did not understand until later that the overarching goal may have been to bolster the president’s 2020 election chances.

Sondland said that he went along with what Giuliani wanted in the hope of pacifying him and restoring normal relations between the two countries.

Under questioning, he acknowledged believing the statement was linked to a White House visit the new president of Ukraine sought with Trump.