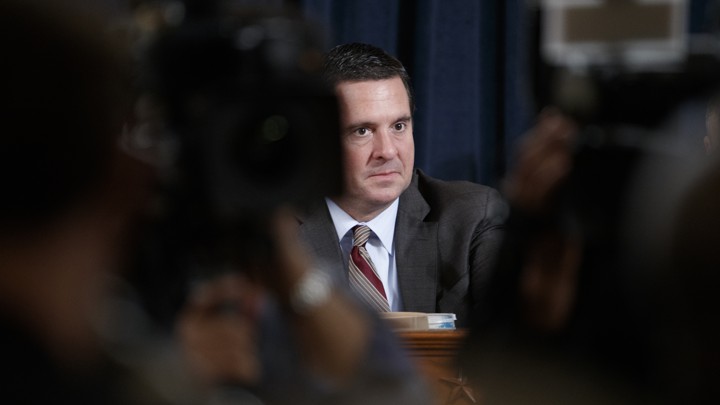 Rep. Devin Nunes (R-CA) is facing a review of whether he violated House ethics rules by allegedly meeting with a former Ukrainian official on a taxpayer-funded trip to get dirt on the Bidens.

At least one outside group has filed a complaint against Nunes with the independent Office of Congressional Ethics (OCE), which can review cases against lawmakers and refer them to the House Ethics Committee.

The Democratic Coalition, a liberal group, filed an ethics complaint against Nunes with OCE alleging that he violated House rules by both having a conflict of interest in the impeachment inquiry if he had interactions with people under investigation and engaging in political activity while on official business.

“Rep. Nunes is currently engaged in overseeing an investigation which it appears he is a fact witness, and which may examine his own activities meeting with foreign officials,” the Democratic Coalition wrote in its complaint.

Multiple Democratic lawmakers have also suggested there may be a need for an investigation into Nunes, who has played a prominent role in the impeachment inquiry as the ranking Republican on the House Intelligence Committee and a chief defender of President Trump.

When asked in an MSNBC interview over the weekend if Nunes could be investigated, House Armed Services Committee Chairman Adam Smith (D-Wash.) said, “quite likely, without question.”

“As Trump’s loyal attack ferret on the House Intelligence Committee, Nunes has continually pushed the same debunked conspiracy theories about Ukraine, the Democratic National Committee and CrowdStrike that the Russians have apparently worked so diligently to spread,” wrote Sykes in an editorial in Newsweek. “Indeed, Nunes has become the de facto face of the GOP defense of Trump, in all of its bizarre contempt for facts, its willingness to ignore and defame witnesses and its zeal to defend the president at all costs — including actively colluding with efforts to dig up dirt on his political opponents.”

Nunes had been accused of meeting Shokin in Vienna in 2018.

Shokin was allegedly investigating Hunter Biden when he was removed from his position after pressure from former Vice President Joe Biden.

Nunes has refused to say whether the allegations were true although he has said they were “demonstrably false.”

“Bottom line,” Maria Bartiromo of Fox News asked Nunes on Sunday, “were you in Vienna with Shokin?”

“I really want to answer all of these questions and I promise you I absolutely will come back on the show and answer these questions,” Nunes said. “But because there is criminal activity here, we’re working with the appropriate law enforcement agencies but I think you can understand that I can’t compete by trying to debate this out with the public media when 90 percent of the media are totally corrupt.”

“Forgive me, but horseshit,” King said, commenting on the Fox News clip.

“This is easy,” King continued. “He was on a plane with staff that went somewhere during this timeframe. There are either passports stamped or if they did on a classified basis, there’s a crew on the plane. There’s the crew of his staff.”

A congressional travel expense report shows that Nunes and three aides traveled to Europe from Nov. 30 to Dec. 3 of last year on Intelligence Committee business while he was still the chairman.

The record does not specify where in Europe they traveled or their detailed itinerary.

A spokesman for Nunes did not respond to a request for comment seeking clarity on whether the expense record is related to a trip to Vienna or if Nunes met with Shokin on the trip.

Nunes has threatened legal action against CNN, as well as The Daily Beast, which also reported on his interactions with Lev Parnas, an indicted associate of Trump’s personal lawyer Rudy Giuliani.

Parnas and Igor Fruman, who were recently indicted on campaign finance charges, helped connect Giuliani with Ukrainian officials in his push for an investigation into the former vice president and the business dealings of his son, Hunter Biden.

The Daily Beast first reported that Parnas helped arrange meetings and calls in Europe for Nunes last year, citing an attorney for Parnas.

CNN later reported that, according to his attorney, Parnas is willing to tell congressional investigators about discussions that Nunes had with Shokin to discuss getting information on the Bidens.

Shokin was removed from his position as prosecutor general in 2016 following pressure from Western leaders, including Biden, who didn’t think he was doing enough to pursue corruption cases.

However, neither Nunes nor Shokin have confirmed the meeting took place.

Nunes called the reporting from CNN and The Daily Beast a “fake news story.”

This is not the first time Nunes has faced ethics questions.

Nunes was accused in 2017 of disclosing classified information when he announced during a press conference that intelligence agencies had collected information about associates of Trump, prompting a House Ethics Committee investigation.

Nunes temporarily recused himself from the Intelligence Committee’s probe into 2016 election interference. But the House Ethics Committee ultimately cleared Nunes of wrongdoing months later, stating that he had not disclosed classified information or violated House rules.