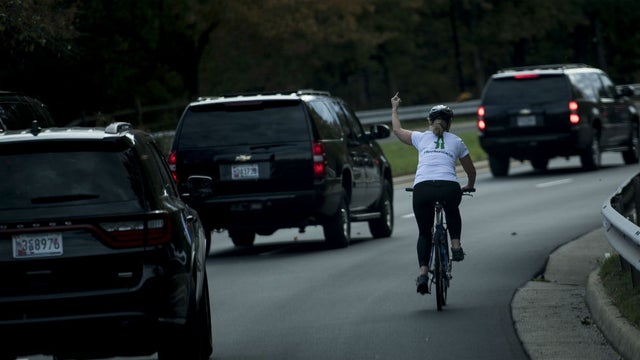 A woman who drew widespread attention in 2017 after she was seen flipping off President Trump’s motorcade while riding on a bicycle has won a seat on the Loudoun County Board of Supervisors in northern Virginia.

Democrat Juli Briskman, who announced last year that she would be challenging Suzanne Volpe (R) for the seat, won the race to represent the Algonkian District tonight.

Briskman had received more than 54 percent of the vote to Volpe’s roughly 46 percent.

Looking forward to representing my friends & neighbors in #Algonkian District who backed me up today! So proud that we were able to #FlipLoudpun #FlipVA #LOCO219 Thank you Loudoun! https://t.co/vRcDUih1AP

Briskman rose to prominence during Trump’s first year in office after a photo of her went viral showing her flashing her middle finger at the president’s motorcade in Sterling, Va.

At the time, Trump was leaving from his golf course in the area when Briskman said her “blood just started to boil” as his motorcade passed her on her bike.

“I’m thinking, DACA recipients are getting kicked out. He pulled ads for open enrollment in ObamaCare,” she said in an interview at the time.

Briskman was fired from her marketing and communications job shortly after the incident, which had been captured by a White House photographer, went viral online.

She said was let go after the company said she had violated its policy by making the photo her profile picture on social media.

It wasn’t until she lost her job, however, that Briskman said she thought about entering politics.

“We have a right to peacefully protest and criticize and express dissent toward our government,” she had said in an interview about the decision.

“I’ve gotten some feedback that folks say you should respect the president. Even if you don’t like what they’re doing, you shouldn’t show this sort of disdain,” she added. “And I simply disagree, and I think the Constitution grants me that privilege.”

Briskman also said in the interview that, if even the chance, she would probably flip off Trump again.