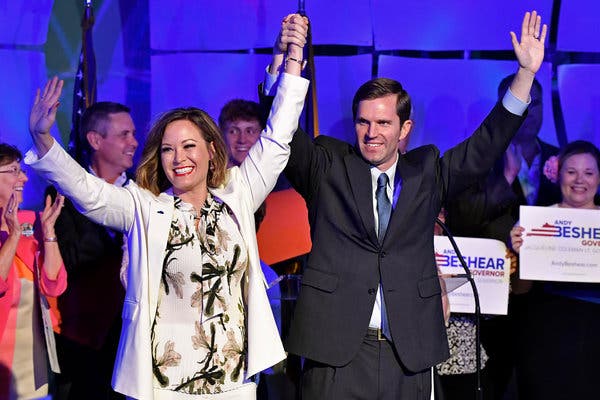 Kentucky Republican Gov. Matt Bevin has been defeated for reelection just one day after President Trump campaigned for him in the solidly Republican state.

Democratic Attorney General Andy Beshear, who out-fundraised and out-spent Bevin, blew through expectations in the largest urban areas, and played to about even in Trump-friendly coal counties in the western part of the state.

Trump said last night that Bevin losing would “send a really bad message” and pleaded with his supporters, “you can’t let that happen to me!”

“Winning a gubernatorial race in a state Trump won by 30 percent in 2016 would have to be considered a pretty terrific night for Democrats,” said Dave Wasserman of the nonpartisan Cook Political Report. “It’s been an awful long time since Democrats got some welcome election results out of coalfields but tonight might break that streak.”

On paper, the race shouldn’t have been close.

Republicans have supermajorities in both of Kentucky’s state legislative chambers, and Trump’s popularity in the state is unwavering.

It’s home to Senate Majority Leader Mitch McConnell, and all but one of the state’s six House members are Republicans.

But in the last four years, Bevin, who won handily by 9 points in 2015, had picked a series of unpopular political fights.

Bevin fought to push people off Medicaid and cut back teachers’ pensions.

He famously said protesting teachers had a “thug mentality,” were “selfish,” and “ignorant.”

“What Bevin has done is that he has gotten into these personal wars with average people,” Jessica Taylor, an editor at the nonpartisan Cook Political Report, said. “He’s just someone who doesn’t play well with others.”

Bevin’s threat to end Medicaid expansion in the state could throw hundreds of thousands of people off their health care, he’s already signed restrictive abortion bills and pushed for serious budget cuts in a state home to some of the United States’ poorest people.

Trump held a rally for Bevin last night, and Vice President Mike Pence campaigned for him as well.

Beshear had spent the last four years fighting Bevin from within the state’s executive branch as attorney general, and appealed to voters to make a change.