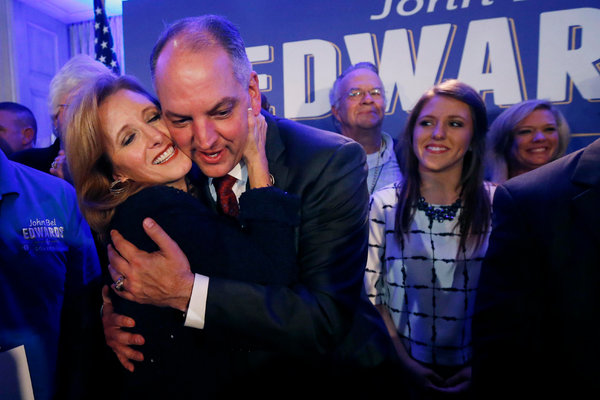 President Trump put his considerable political weight on the line in Louisiana’s governors race, but when the votes were counted the Democratic incumbent held on to his office.

Gov. John Bel Edwards battled to a razor thin win tonight, defying the partisan odds in the ruby red South and won reelection to a seat that Trump desperately wanted returned to Republicans.

Trump had made the runoff election between the Deep South’s only Democratic governor and GOP political donor and businessman Eddie Rispone a test of his own popularity and political prowess heading into the 2020 presidential race.

It is yet another startling setback for Trump in traditionally dependable Republican states.

Trump won Louisiana by 20 percentage points in 2016, and made three trips to Louisiana to rally against Edwards.

“This Saturday, the eyes of history are looking down on the great people of Louisiana,” Trump said to the crowd. “It’s a close one. You gotta vote on Saturday. You’re gonna have a great Republican governor.”

Good morning Louisiana! Polls are open at 7AM. Get out and VOTE for @EddieRispone to be your next Gov! He will get your taxes and auto insurance (highest in Country!) way down. Loves our Military & Vets. Will protect your 2A. Find your polling place below: https://t.co/0rnhb4z3HU

LOUISIANA, VOTE @EddieRispone TODAY! He will be a great governor!

Louisiana, 3 hours left, get out and Vote for @EddieRispone for Governor. Lower taxes and much more!

Vote @EddieRispone & ALL Republicans TODAY AND BRING YOUR FRIENDS!!! https://t.co/fGlpZHLfHo

But in the end, Trump’s efforts may have backfired, motivating more Democrats to the polls than Republicans.

Worse for Republicans, it appeared the GOP fell short of a state House supermajority, guaranteeing Democrats a role in Louisiana’s 2020 redistricting.

It was pure joy at the Edwards campaign victory celebration, where Stevie Wonder’s “Signed, Sealed, Delivered” was blaring on the loudspeakers.

Trump particularly wanted to capture Louisiana’s governorship for the GOP after Democrats ousted a Republican incumbent in Kentucky despite Trump’s intervention.

Rispone was not among the top-tier candidates GOP leaders hoped would challenge Edwards.

The 70-year-old owner of a Baton Rouge industrial contracting company had never run for office and had little name recognition.

He hitched his entire candidacy to Trump, introducing himself in ads that focused on support for the president.

Both parties spent millions on attack ads and get-out-the-vote work, on top of at least $36 million spent by candidates.

Republicans sought to prove that Edwards’ longshot victory in 2015 was a fluke, against a flawed GOP opponent hobbled by a prostitution scandal.

Democrats wanted to show they could win conservative states with the right candidates.

The 53-year-old Edwards is a former state lawmaker from rural Tangipahoa Parish.