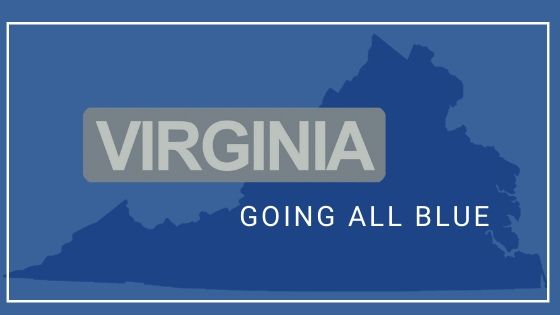 It wasn’t so long ago that Republicans could bank Virginia’s 13 electoral votes in presidential elections. But not any more.

Democrats claimed majorities in both houses of Virginia’s legislature in yesterday’s statewide elections, building on gains they made in the 2017 election and securing the first unified Democratic government in the commonwealth in 26 years.

Higher than usual turnout for the off-year statewide election saw Democrats take the House of Delegates and the Senate.

Going into Tuesday, Republicans held a 20 to 19 advantage in the State Senate and a 51 to 48 edge in the House of Delegates, with one vacancy in each chamber.

Democrats picked up at least two Senate seats, including an upset in a suburban Richmond district by Ghazala Hashmi, who will be the first Muslim woman in the Senate.

A former college literature professor, Hashmi was brought to the country from India as a child.

Running her first campaign, she described experiencing a personal crisis after President Trump ordered a ban on immigration from Muslim-majority countries.

“I didn’t know if I actually had a home in this country,” she said in an interview before the voting. “My anxiety was caused by wondering if other people would speak up and support the assault we were seeing on civil liberties.” She decided to speak up and represent herself.

Among other notable seats they flipped included the one held by Del. Tim Hugo (District 40), the last Republican state legislator from Fairfax County, as well as the Northern Virginia state senate seat once held by conservative Dick Black.

The election’s results also mark yet another shift in Virginia away from Republicans in the divided era of President Trump, where suburban voters in jurisdictions around Washington have steadily melted away from the GOP, both in local and federal races.

The impact of controlling the governorship, the House and the Senate — the trifecta, as it’s called — is certain to empower Northam and be felt in the upcoming legislative session.

Democrats have pledged to move ahead on measures that have long been blocked by Republicans, including gun control, abortion rights, an increase in the minimum wage, and the ratification of an amendment to the U.S. Constitution that would enshrine gender equality.

The possibility of movement on those issues — notably gun control — flooded the state with money from outside groups, and animated many voters on Tuesday.

May’s mass shooting in Virginia Beach and a resulting special session of the General Assembly that ended with no legislative action on guns were on the minds of some Democrats who voted in Northern Virginia.

In terms of the impact on the 2020 presidential election, Larry Sabato of the University of Virginia cautions that it may not mean much — largely because of the direction Virginia was already heading.

“I don’t think the Republicans were counting on Virginia’s electoral votes, I don’t think they are that foolish,” he said. “We’re turned purple from red, we’ve gone through all the colors and we’re pretty settled on light blue.”