The Christianity Today editor who penned an op-ed calling for the removal of President Trump is standing by his position despite pressure from noted evangelicals.

Mark Galli appeared on Face This Nation this morning, repeating his claims that Trump is morally unfit for office.

Critics of Galli’s original op-ed, published in evangelical magazine on Thursday, accuse the writer of having little understanding of the Constitution and failing to cite any legal reasons for why Trump should be removed.

But Galli doubled down on Sunday, stating: ‘I’m not really speaking politically- making a political judgment about him, because that’s not our expertise at Christianity Today. I am making a moral judgment that he is morally unfit’.

He continued: It’s his public morality that makes him unfit because all of us, anybody in leadership has- none of us are perfect. We’re not looking for saints. We do have private sins, ongoing patterns of behavior that reveal themselves in our- in our private life that we’re all trying to work on.

‘But a president has certain responsibilities as a public figure to display a certain level of public character and public morality.’

Galli conceded that his views may not be congruous with those of his readers.

‘The only person I represent is me and maybe my magazine, not for that much longer since I’m retiring in a few days,’ he told host Margaret Brennan. 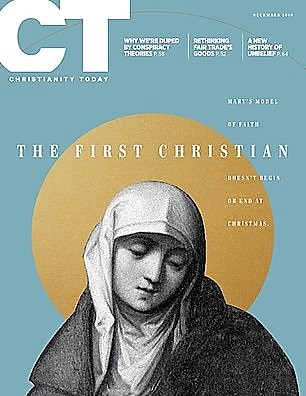 Galli is leaving his post next month, but his replacement, Dr. Daniel Harrell, appears to share his predecessor’s anti-Trump sentiments.

Harrell, who will take over the magazine on January 3 and has taught at Harvard University, re-tweeted a link to an interview with Galli, praising his criticisms of Trump.

But Trump claims the magazine has lost its roots, taking to Twitter on Friday to declare that the periodical is run by the ‘far left’.

Trump noted that Christianity Today is no longer affiliated with the Graham ministries.

He also claimed he has been the best President for Bible-believing Christians—and predicted tough times for the born-again if a Democrat beats him in 2020.

In his op-ed, Galli targeted evangelical Christians who continue to support Trump ‘in spite of his blackened moral record.’

‘The facts in this instance are unambiguous,’ he wrote, adding: ‘The president of the United States attempted to use his political power to coerce a foreign leader to harass and discredit one of the president’s political opponents,’ he wrote.

‘That is not only a violation of the Constitution; more importantly, it is profoundly immoral.’

Galli claimed Trump’s own habits have slid the nation toward immorality: ‘He has hired and fired a number of people who are now convicted criminals. He himself has admitted to immoral actions in business and his relationship with women, about which he remains proud.’

‘His Twitter feed alone—with its habitual string of mischaracterizations, lies, and slanders—is a near perfect example of a human being who is morally lost and confused,’ he stated.