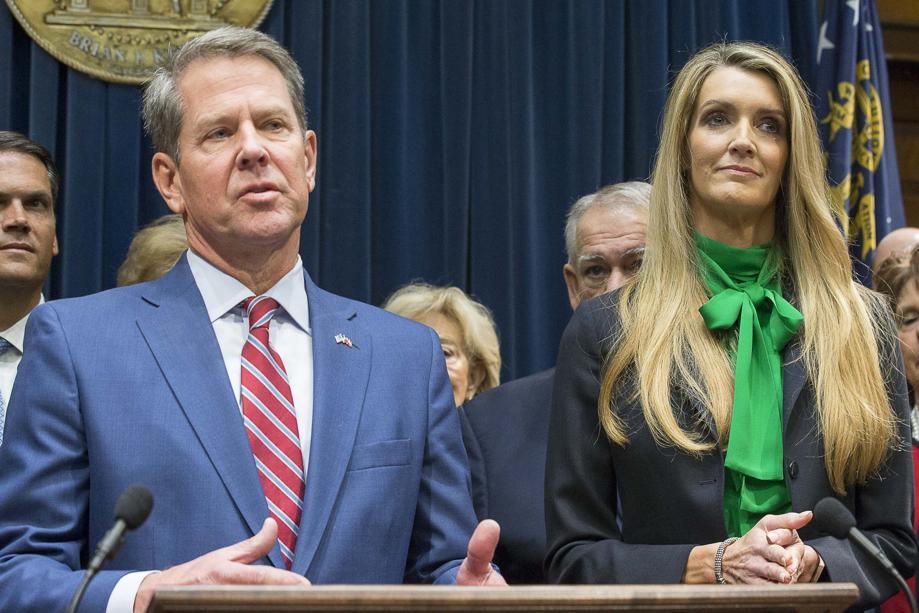 During remarks in Kemp’s ceremonial office, Loeffler presented herself as a lifelong conservative who is “pro-Second Amendment, pro-military, pro-wall and pro-Trump” to counter criticism pitting her as a closet liberal.

“I make no apologies for my conservative values,” she said, “and will proudly support President Trump’s conservative judges.”

A multimillionaire whose husband is chief executive of Intercontinental Exchange, Loeffler’s advisers say she is prepared to pump $20 million of her own fortune into a 2020 campaign that’s expected to shatter fundraising records.

Loeffler will become the second woman in Georgia history to serve in the U.S. Senate when she is sworn in next year to succeed Republican Johnny Isakson, who is stepping down because of health issues.

Her selection ends months of maneuvering for the coveted seat, but it seems likely to open a tumultuous new phase.

U.S. Rep. Doug Collins recently said he is “strongly” considering a run for the Senate seat if he’s not picked.

“I appreciate the support I have received from the president and many others,” Collins said today, “and right now, my primary focus is defending our president against partisan impeachment attacks.”

Trump repeatedly urged the governor to tap Collins, and a secretive meeting in Washington with Loeffler didn’t win him over.

The news of Kemp’s decision, first reported by The Atlanta Journal-Constitution last week, triggered backlash from conservatives who accused him of betraying Trump.

Fox News personality Sean Hannity urged his fans to clog Kemp’s phone lines with their complaints, and U.S. Rep. Matt Gaetz, R-Florida, said it would be the “funeral” for the governor’s political career.

Collins’ allies had aggressively pushed Kemp to change his mind, describing the Gainesville Republican as a champion Trump needs to defend him against impeachment proceedings headed for the U.S. Senate.

But Kemp has long wanted to pick a candidate who is a woman or minority, mindful that his selection will be on the ballot in 2020 and also potentially on the ticket with him in 2022 when he could face a rematch against Democrat Stacey Abrams.

He is wagering that a first-time candidate can survive not only a challenge from energized Democrats eager to turn Georgia into a battleground, but also quiet conservative critics mistrustful of his pick.

And as a suburban conservative woman, she could help broaden the appeal of a Georgia GOP that’s dominated by male elected officials – and has suffered losses in metro Atlanta that could jeopardize the Republican grip on state politics.

“Women are not better legislators, but we do bring a different perspective,” said state Rep. Sharon Cooper, a Marietta Republican. “And it’s time we are represented in the U.S. Senate in Georgia.”

But Loeffler’s appointment brings much uncertainty.

She’s not widely known, even in political circles, and her stances on the contentious debates that she’d have to tackle in Washington are unclear.

Some grassroots activists have already vowed to fight her, worried that she’s too moderate because of past campaign contributions to Democratic candidates and mistrustful of her support for Trump.

The governor has pushed back on what he called “ridiculous” criticism, asserting that his pick would be an anti-abortion Republican who backs gun rights and is “100% supportive” of Trump.

And his advisers and supporters have launched a forceful defense of Loeffler and swung back in scathing terms at out-of-state critics.

Loeffler will soon be tested.

The next weeks will bring a burst of scrutiny that will feed the intense runup to the 2020 vote.

Her initial stances, including a possible vote on Trump’s impeachment, will set the tone for her election campaign.

There’s also a chance of a January 2021 runoff if no candidate wins a majority of the vote, a distinct possibility in a special election when multiple contenders from all parties are on the same ballot.

That prospect is even likelier if Collins decides to run.

It’s not clear yet which Democrats could join the race, though party leaders hope to avoid a fractious fight of their own.

One candidate has entered without the party’s support: Matt Lieberman, the son of former U.S. Sen. Joe Lieberman of Connecticut, announced his campaign in October.

“You can have a woman candidate, but it’s about the issues women care about. That’s what people are going to vote for,” Jordan said. “I wish her all the luck in the world. And I wish the governor some luck because it looks like he’s had some trouble with Sean Hannity.”