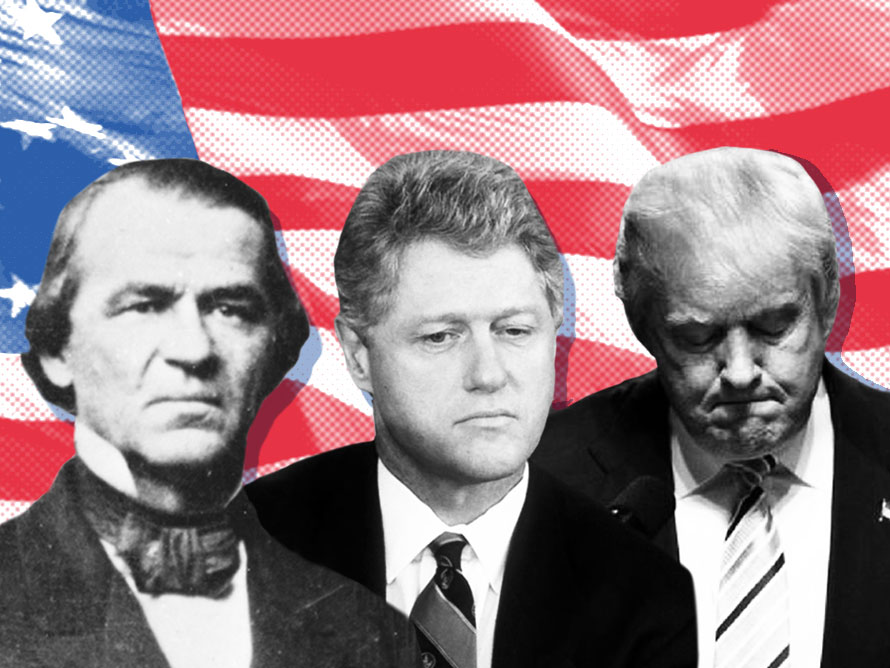 Whatever else history says about him, today Donald J. Trump will become the third U.S. president to be impeached.

It represents an astonishing turnabout since Robert Mueller’s public testimony less than six months ago seemed to drain energy from impeachment efforts.

As Republicans found refuge in the special counsel’s refusal to press charges or explicitly recommend congressional action, Speaker Nancy Pelosi signaled repeatedly that Democrats should focus on defeating Trump in 2020 elections rather than a politically risky impeachment effort.

Yet Trump’s ever-bolder determination to defy constraints on presidential behavior has scrambled calculations on all sides.

As a result, House Democrats today will deliver to him what some call a “constitutional reckoning.”

In the past, two presidents — Andrew Johnson and Bill Clinton — have been impeached by the House.

Following their impeachment, both Johnson and Clinton avoided removal from office during their respective Senate trials.

A third president, Richard Nixon, narrowly missed being impeached, and this only because he resigned from office days prior to a House impeachment vote taking place.

No president has ever been convicted in the senate and removed from office.

Republicans are signaling that Trump is safe as well, as it would take 67 votes to convict him.

Trump today will join two other presidents who were impeached: 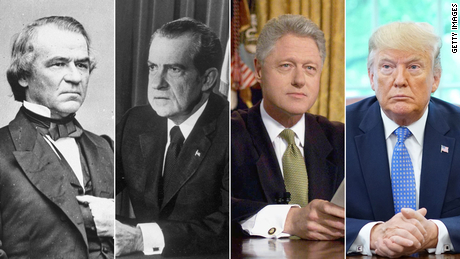 The impeachment of Johnson, the nation’s 17th president, got underway when the House charged him with high crimes and misdemeanors as noted in 11 articles of impeachment presented on the House floor in February 1868.

The House voted to impeach Johnson on March 3, 1868, adopting the articles of impeachment as presented and forwarding them on to the Senate.

After a contentious trial, on May 16, the Senate failed to convict Johnson on one of the 11 articles, falling short of the necessary two-thirds majority by one vote.

A ten-day recess was called before votes were taken on additional articles.

On May 26, after two more votes failed, the trial was adjourned.

On October 8, 1998, the US House voted to begin impeachment proceedings against Clinton, the nation’s 42nd president.

The high crimes and misdemeanors noted in two articles of impeachment against Clinton were specifically lying under oath and obstruction of justice related to the sexual harassment lawsuit brought forth by Paula Jones.

In 1994, Jones filed a sexual harassment lawsuit against Clinton, in which she said he had harassed her while he was governor of Arkansas. Clinton tried to push off a trial until he was out of office, but in May 1997, the Supreme Court ordered the case to move forward.

Among the witnesses Jones’ attorneys included was Monica Lewinsky, a former White House intern, who claimed to have had a sexual relationship with the president.

Clinton gave a sworn deposition in January 1998 denying having had sexual relations with Lewinsky. Less than two weeks later, after news of the scandal broke publicly, Clinton addressed the allegations in a televised address to the nation, where he maintained his innocence.

“I did not have sexual relations with that woman, Miss Lewinsky,” Clinton said.

However, in taped grand jury testimony in August 1998, Clinton admitted that he’d had an “improper physical relationship” with Lewinsky. In a televised speech to the nation, the president admitted that his relationship with the former intern was “not appropriate.”

Following the November 1998 election, the Democratic party was in the minority in both the US House and the US Senate. Following Clinton’s admissions, enough members of the House determined that Clinton’s false testimony and perjury relating to the Jones lawsuit were impeachable offenses.

Clinton was impeached on December 19, 1998 on the grounds of perjury to a grand jury and obstruction of justice. Two other articles failed: a second count of perjury and abuse of power.

A Senate trial against Clinton convened on January 7, 1999, with US Supreme Court Chief Justice William Rehnquist presiding. The trial took place over much of the month of January and the first week of February.

After closing arguments, on February 9, after the Senate voted against public deliberation, the body began to deliberate Clinton’s fate behind closed doors.

On February 12, the Senate emerged to vote, ultimately voting against removing Clinton from office.

In February 1974, a formal impeachment process was initiated against the nation’s 37th president, Richard Nixon, when the House Judiciary was granted authority to investigate whether grounds existed to impeach him of high crimes and misdemeanors.

The charges against Nixon were primarily related to the Watergate scandal and were undertaken a year after the US Senate established a select committee to investigate the 1972 break-in at the Democratic National Committee headquarters and the Nixon Administration’s attempted cover-up of its involvement.

In July 1974, three articles of impeachment were approved against Nixon — one each for obstruction of justice, abuse of power and contempt of Congress. Two other articles were debated, but not approved.

Before the full House could vote on the resolutions, Nixon made a transcript of a conversation from an audiotape on August 5, 1974. This transcript made clear his direct involvement in the cover-up and led to his resignation from office on August 9, 1974.

It is widely believed that had he not resigned, the House would have impeached Nixon within days, followed by his removal from office by the Senate.

The aid was to help Ukraine, an ally of the United States and NATO, counter ongoing aggression from Vladimir Putin’s Russia.

Trump linked the aid to a “favor” he requested that Ukraine announce an investigation into one his likely Democratic opponents in 2020, former Vice President Joe Biden.

After the House began holding hearings into the matter, Trump refused to allow some of his top aides to testify, defying subpoenas.

Moving at a fast clip this fall to wrap up the hearings prior to the start of a presidential election year, Democrats proposed two articles of impeachment: 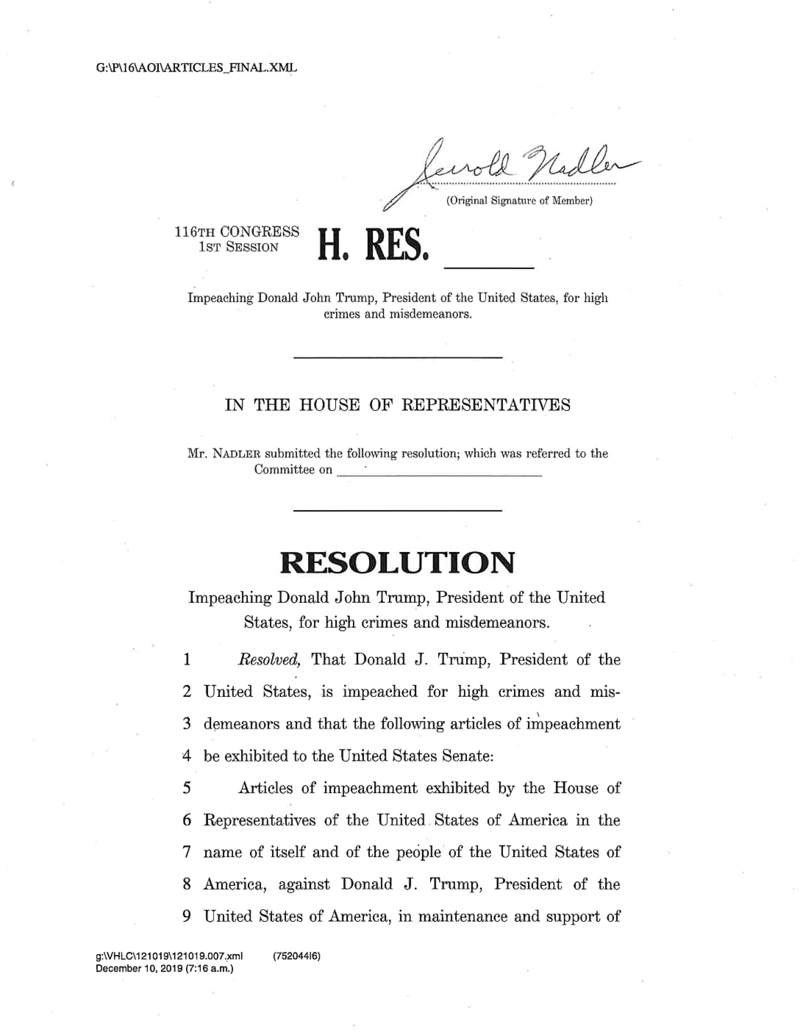 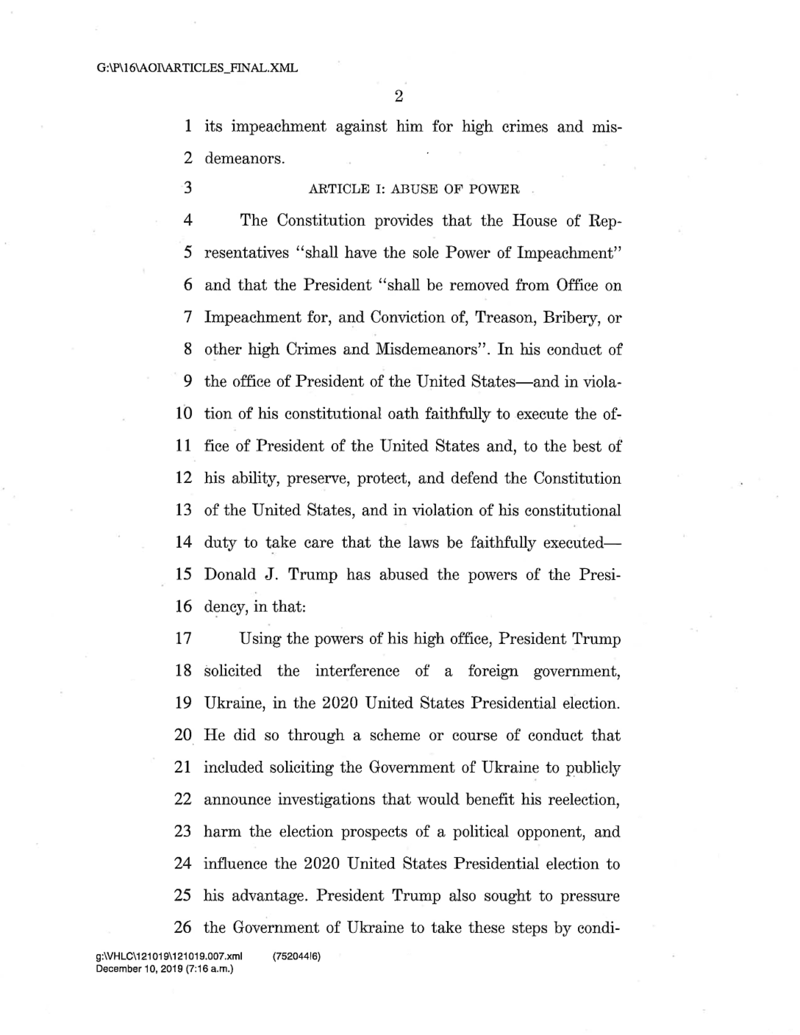 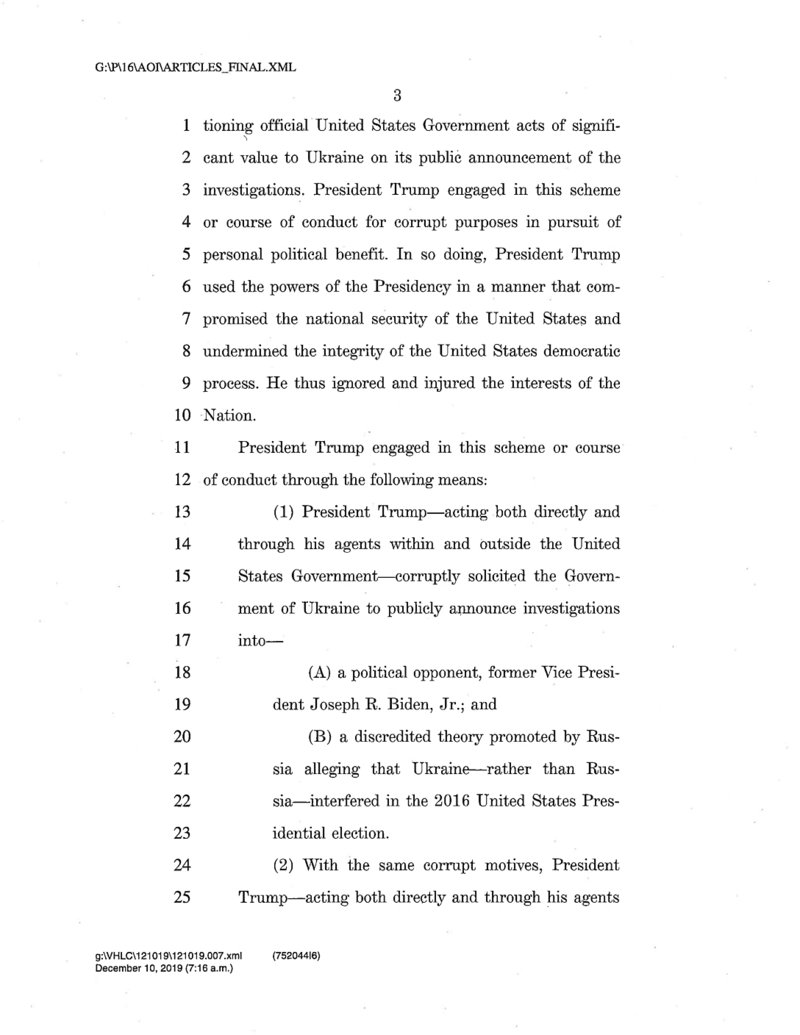 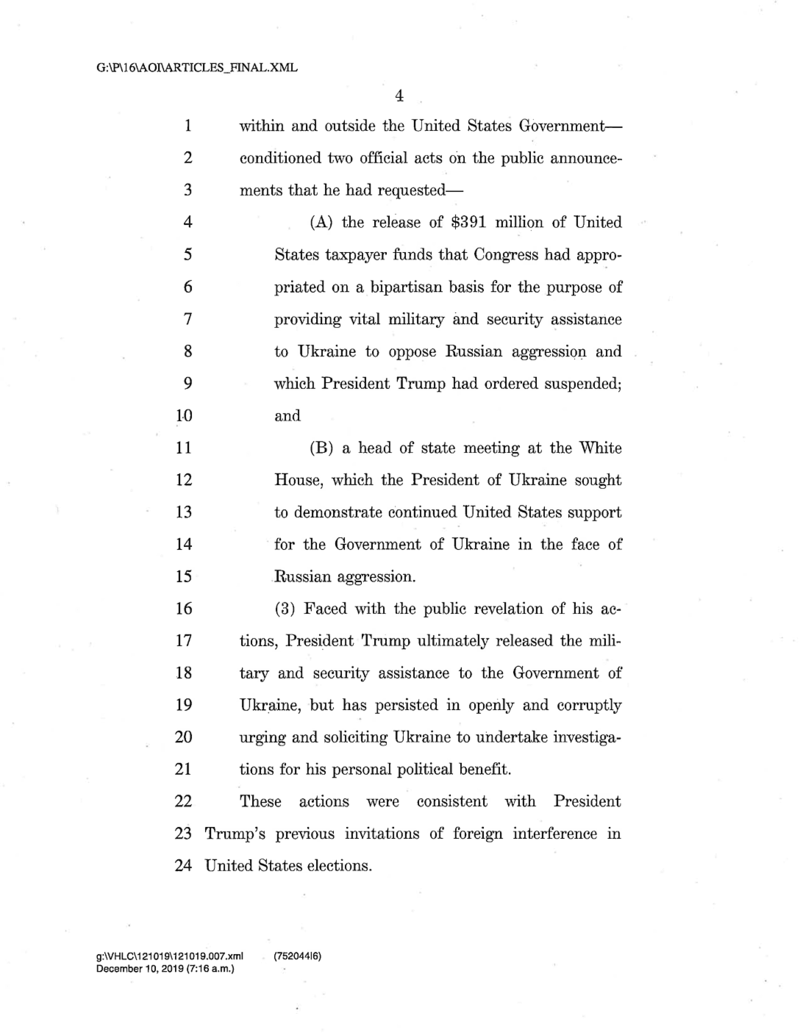 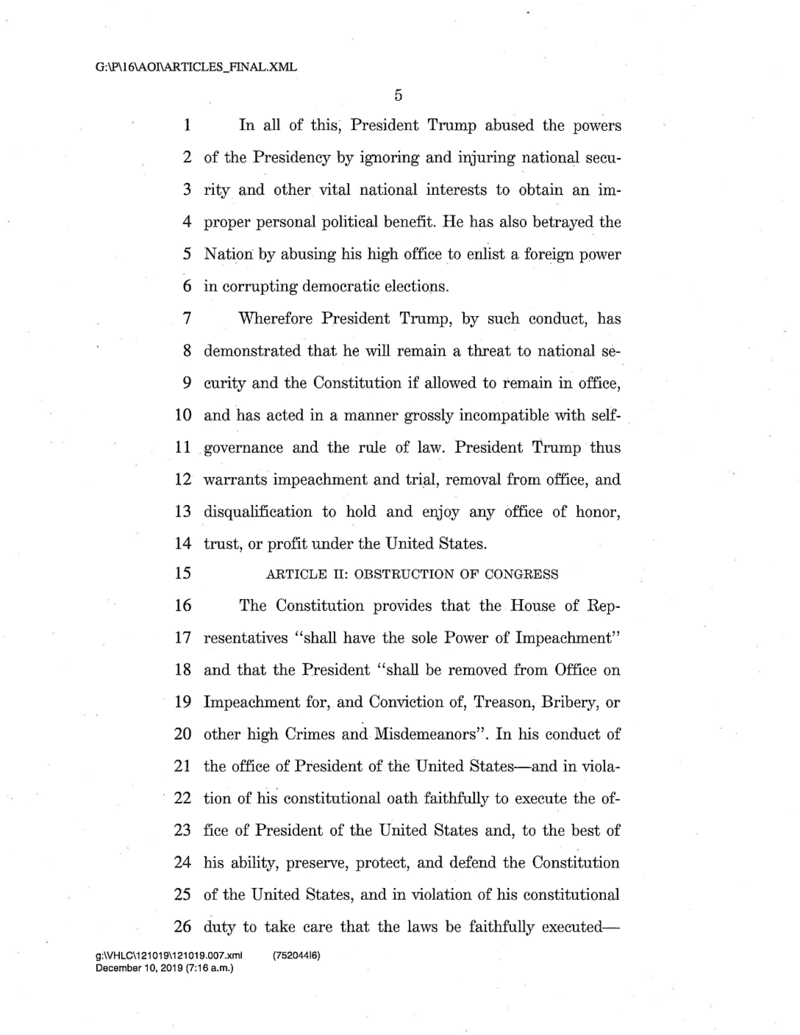 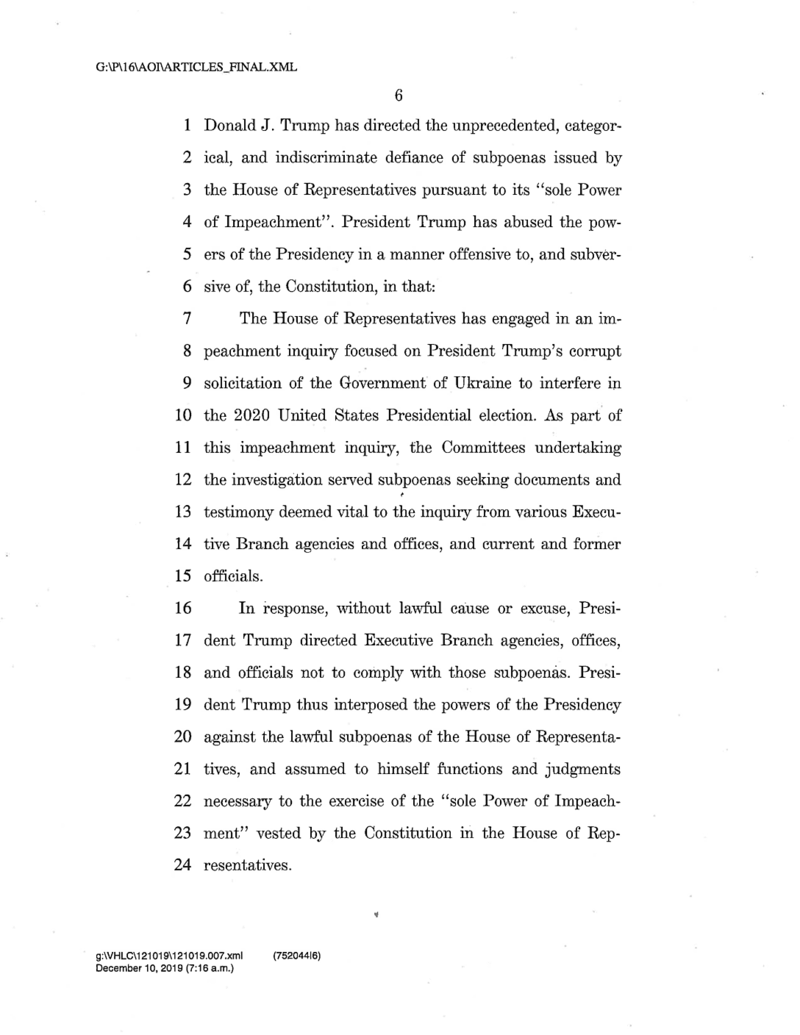 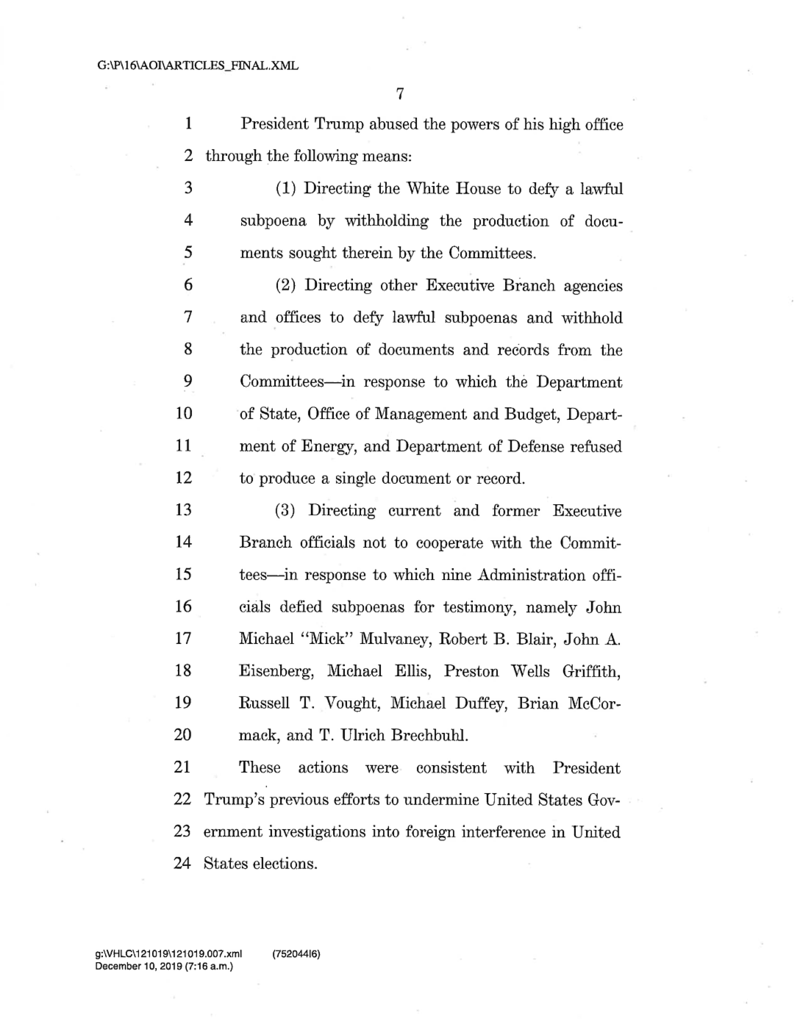 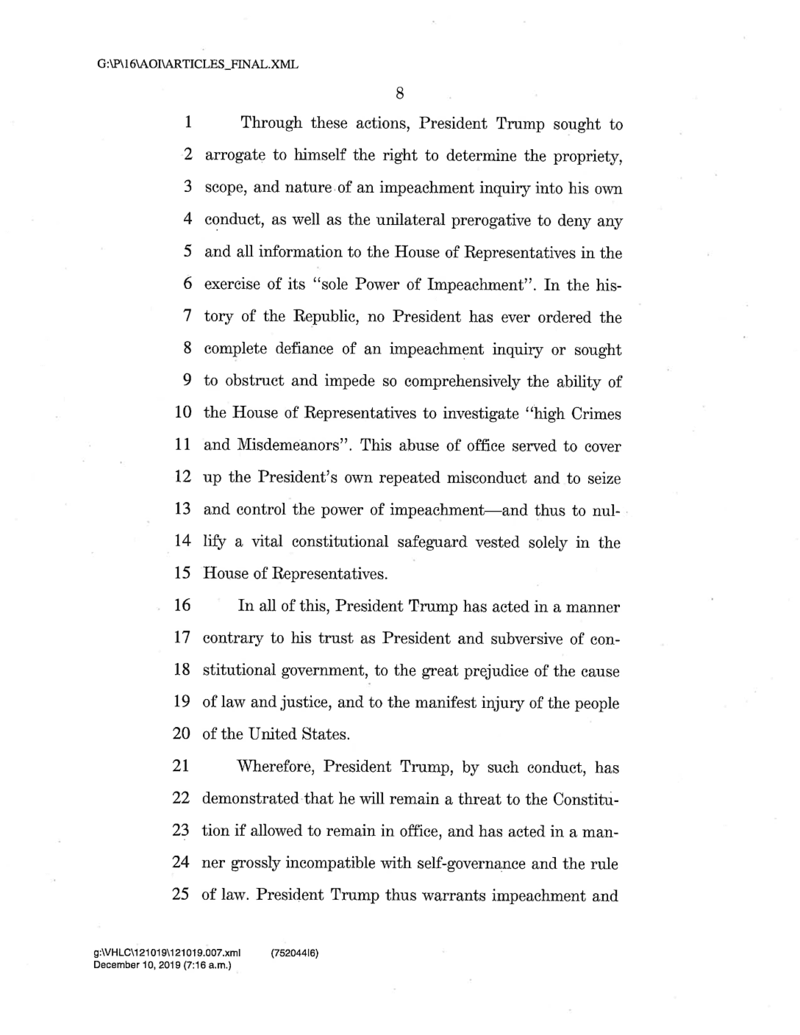 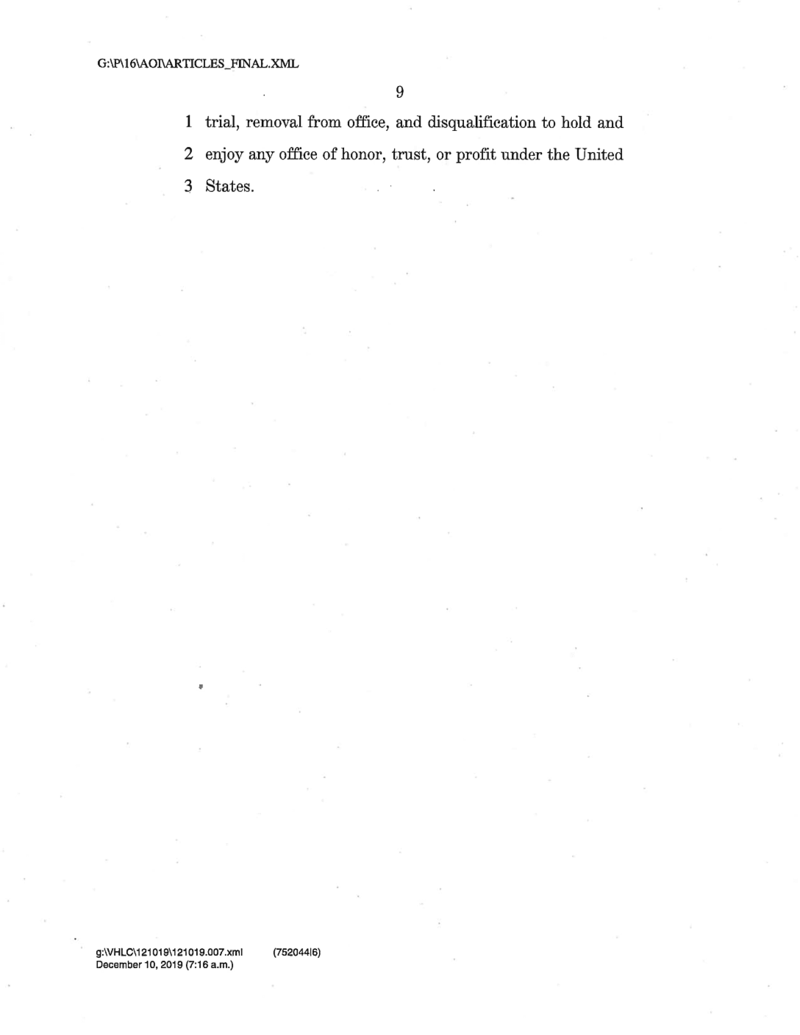