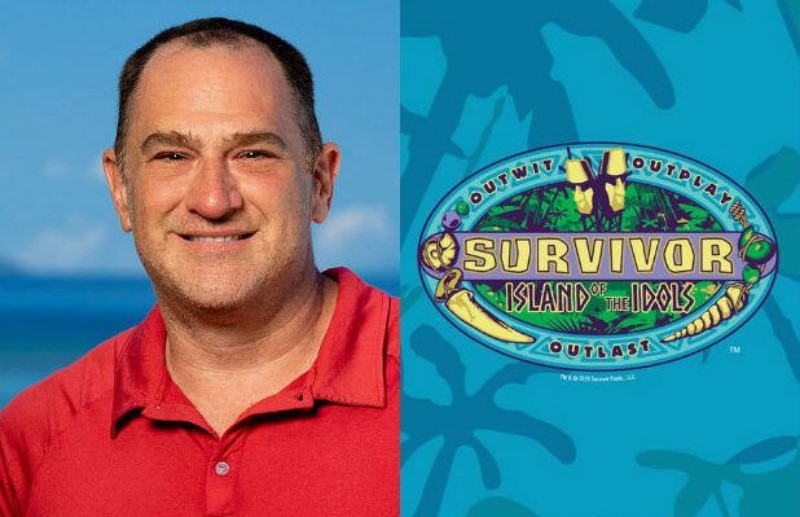 For the first time in the history of Survivor, a player was pulled from the game due to unacceptable behavior.

At the end of tonight’s episode, host Jeff Probst came to the tribe’s camp to tell the remaining contestants that Dan Spilo had been removed from the game.

He did not elaborate on the reason why Spilo was taken out of the competition, leaving the fellow players to speculate about what happened.

As the show ended, the screen faded to black.

Then the following words appeared: “Dan was removed from the game after a report of another incident, which happened off-camera and did not involve a player.”

A rep for Spilo, a Los Angeles-based talent manager, told reporters that he is not commenting on the episode.

The incident was not caught on camera, but at least one other contestant witnessed it.

The incident came just weeks after Spilo, a Hollywood agent, was accused of inappropriately touching a female contestant earlier this season.

During the controversial episode, contestant Kellee Kim expressed concern that Spilo had violated her personal space, even after she made multiple requests for him to stop. 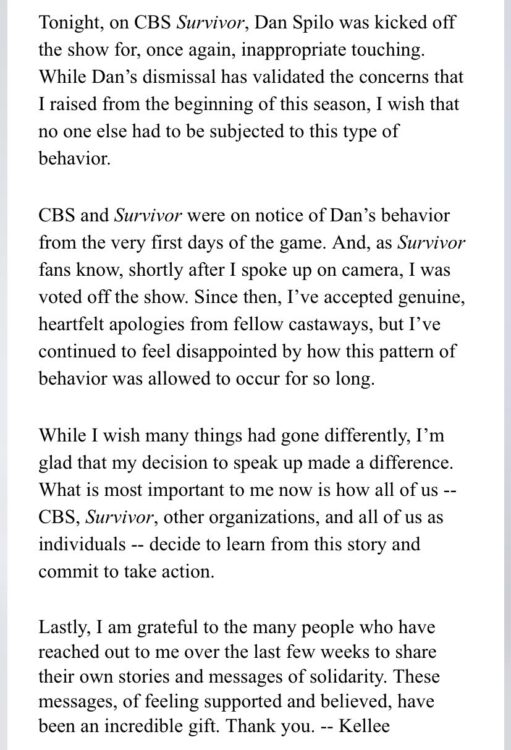 Players still in the game were informed of the decision, but not any of the circumstances surrounding it.

When interviewed tonight by EW, host Jeff Probst said questions about what happened were “fair and reasonable,” but added: “Out of respect for privacy and confidentiality, I can’t say anymore.”

CBS announced tonight that for the first time the reunion episode and finale will be pre-taped instead of live, due to concerns of sensitivity and security.

“Complex social issues were woven into the game in a way we have never seen before,” said Probst. “With our contestants’ welfare at the forefront, we have spent a lot of time discussing every layer of the situation with human resources, diversity and inclusion representatives, show therapists, lawyers, publicists, and standards and practices. We all worked diligently throughout the entire process to make the right decisions and portray an accurate depiction of what took place. We have learned a lot and it will inform our process moving forward.

Probst said Spilo was “not happy” when told he was being removed, but had calmed down and was “actually very respectful” as he departed.

The decision throws what had been an interesting season into chaos with just days to go until the finale.

“I have to say that it’s a very complicated situation for the players,” said Probst. “They’re on day 35 of 39. They’re very close to the end. They’re also in a state of “eyes on the prize.” And because they did not receive more information for privacy reasons, they seemed to accept the news and moved on with the game.”

While Survivor’s three-hour finale and reunion shows usually take place live from CBS Television City in Los Angeles from 5 p.m. to 8 p.m. PT to concur with the East Coast airing of the program, the Dec. 18 Survivor: Island of the Idols season-ender will actually go “live-to-tape” from 1 p.m. to 4 p.m. PT, four hours earlier than normal, and then air back on TV later in the evening.