DOCUSERIES: Obama On Trump In 2016: “You’ve Got To Keep A Fascist Out Of The White House” 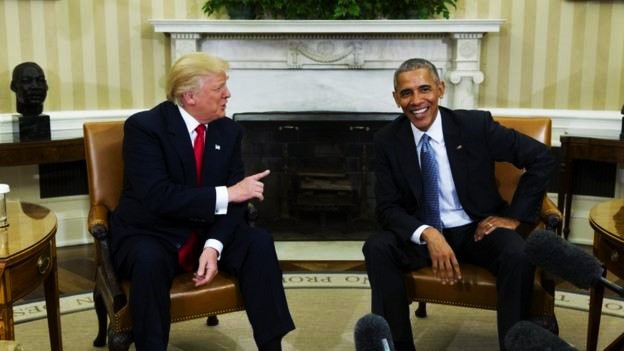 That is, at least, according to Tim Kaine, the Democratic senator from Virginia and a friend of the former president.

In a video clip from October 2016, Kaine is seen relaying Obama’s comment to Hillary Clinton.

The footage is part of the new Hulu documentary Hillary.

“President Obama called me last night and said, ‘Tim, this is no time to be a purist,’” Kaine tells his then–running mate. “‘You’ve got to keep a fascist out of the White House.’”

Clinton replies: “I echo that sentiment.”

In an interview at Sundance today Clinton elaborated on her exchange with Kaine. “If you look at the definition [of fascist], which I’ve had the occasion to read several times,” Clinton said, “I think we can agree on several things: One, he has authoritarian tendencies and he admires authoritarian leaders, [Vladimir] Putin being his favorite. He uses a form of really virulent nationalism. He identifies targets: immigrants, blacks, browns, gays, women, whoever the target of the day or week is … I think you see a lot of the characteristics of what we think of [as] nationalistic, fascistic kinds of tendencies and behaviors.”

Obama has been careful in how he’s publicly discussed his successor.

Campaigning against Trump in 2016, Obama said several times that “democracy is on the ballot,” and he often portrayed the then–Republican nominee as an easily triggered hate-monger who couldn’t be trusted with the presidency.

The night before the November election, at a closing rally in Philadelphia with Clinton, Obama said that the presidency reveals people for who they really are, and that Americans should be worried about what Trump had revealed about himself.

Since then, Obama has largely stayed away from offering specific criticism of Trump.

But he campaigned in 2017 and 2018 to defeat the president’s Republican allies, declaring, in a repeat of his 2016 message, that “our democracy’s at stake.”

Obama has never gone as far as using the word fascist in public, even though that’s not an uncommon opinion, especially on the left.

Journalists and academics who have lived in and studied fascist regimes regularly point to the traits Trump seems to share with those leaders, including demanding fealty, deliberately spreading misinformation, and adopting Joseph Stalin’s slur that the press is the “enemy of the people.”

“He speaks, and his people sit up at attention,” Trump gushed about Kim in a 2018 interview on Fox & Friends. “I want my people to do the same.”

In the footage from Hillary, Kaine seems to suggest that Obama wanted him to be more aggressive against Trump.

“He knows me and knows I tend to” hold back, Kaine says.

In the Sundance interview, Clinton said that Obama had never used the word fascist in conversations with her about Trump.

“Hillary,” a four-part documentary series will be available on Hulu on March 6.

The docuseries chronicles her early life, rise to national prominence and political career.