ECONOMY: Trump’s Much Trumpeted Market Rally Gets Walloped By The Coronavirus 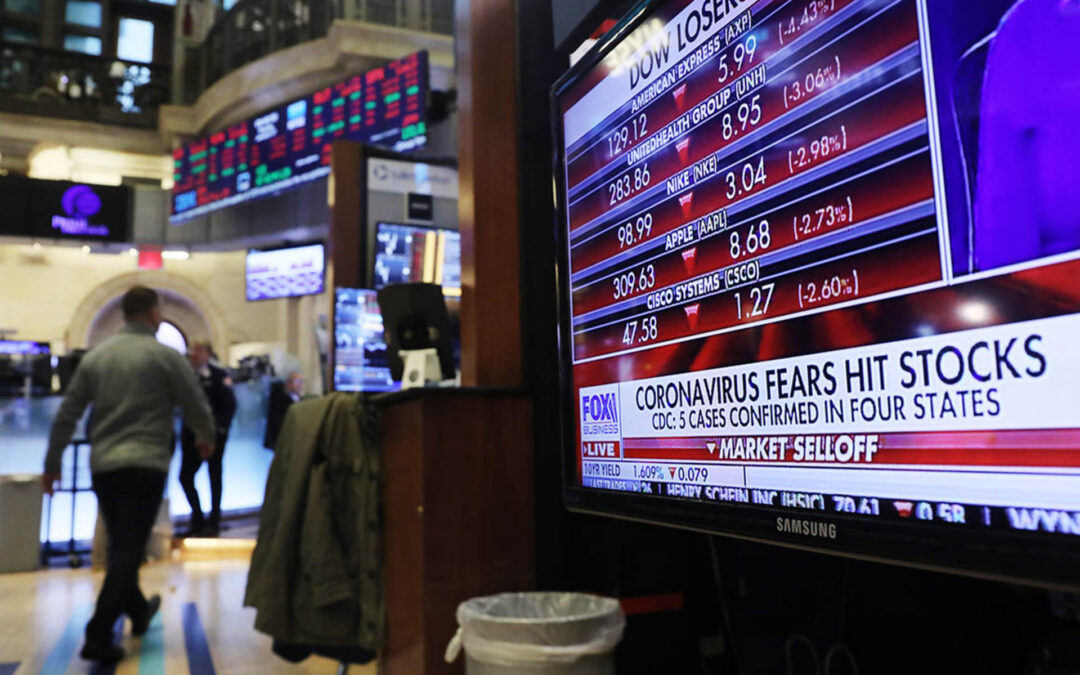 Trump tweeted today that U.S. officials are in “very close communication” with China and offered aid to President Xi Jinping as his nation grapples with the coronavirus.

The tweet happened just as markets tumbled worldwide, including a drop in U.S. stocks that erased this month’s gains.

Meanwhile, China’s financial regulators said they will suspend trading on the Shanghai and Shenzhen stock exchanges for a longer period of time after a long holiday as fear over the extent of the outbreak spread.

The Dow Jones Industrial Average opened 500 points lower as news of the virus spreading to the U.S. and other countries grew and world officials scrambled to contain the outbreak, which began in Wuhan, China.

The coronavirus has affected over 2,700 people.

The Dow wound up closing down 456 points, or nearly 1.6 percent.

Five cases have been identified in the U.S., and China has shut down travel out of Wuhan.

Stocks on Wall Street gyrated early on Monday as investors feared whether health officials will be able to contain the virus and expressed concern over its impact on travel and tourism as well as general investor confidence about global health.

They would up near the lows of the day.

An out-of-control virus — now thought to spread through human to human contact — has long been among the most terrifying prospects both for the general population and for investors worried that some external event could bring to an end one of the most powerful market bull runs and American economic expansions on record.

“I don’t see falling estimate changes for economic activity or earnings. It is as if markets say, a few people have a cold so what’s the big deal? It’s a puzzle,” Cumberland Advisors chief investment officer David Kotok said before the sell-off gripped markets over the weekend.

“I feel there is more correction ahead,” he said this morning. “This is not a simple scenario.”

A rising stock market has been one of Trump’s biggest political selling points, and the drop in equity markets appeared to stir him into further action.

Other analysts suggested it was too soon to assess how big an impact the virus will have on economic activity around the word or on global financial markets.

Shares in airlines and other tourism-related stocks were among the worst hit.

Stocks in Europe and Tokyo were down around 2 percent.

“The economic impact of the novel coronavirus will depend on how quickly it is contained and the confidence of the public in the authorities’ ability to take effective measures,” Imogen Page-Jarrett, analyst at The Economist Intelligence Unit, said in a note to clients today. “While the initial outbreak seems to have been covered up to some extent by the local government, the authorities are now responding forcefully and in a more transparent manner than they did during the SARS outbreak. SARS persisted for around six months from its outbreak in December 2002 to its dissipation, with March 2003 representing a nadir in terms of its economic impact. This latest outbreak could follow a similar trajectory, suggesting that the impact is likely to be most concentrated in the first and second quarters of 2020.”

Chinese consumer spending — which can have a direct impact on a U.S. and global economy that sells heavily into the Chinese market — is likely to take a hit, according to analysts.

“There should be no doubt that this will seriously impact the Chinese (and global) economy significantly,” Richard Bernstein of RB Global Advisors said in an email Monday morning. “However, one should expect that the government will respond with even more monetary and fiscal stimulus. One should always extend one’s time horizon when investing in China, and this will clearly be the case. The important question is what China’s economy will look like in a year, and not in a quarter. Everyone should realize right now that the next quarter or even two will look miserable.”

Kotok said the global path of the virus will be a top concern for investors in the days ahead.

“If we see an outbreak, or a cluster of cases in a mature economy like the U.S. or France or you name it and fear is no longer attached to China but spreads, then I think this really tanks markets,” he said. “Then you see a global fear and global slowdown and rightfully so. I’m walking around conferences and I’m the only one wearing a mask. Complacency is a very grave danger in this type of risk environment.”