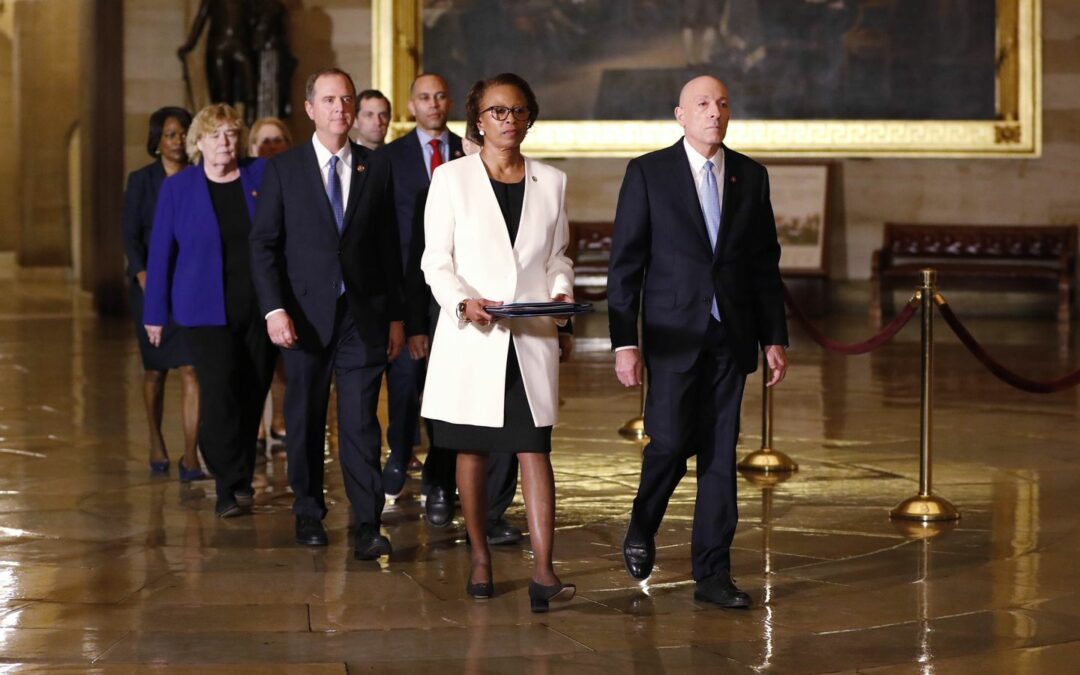 The House today delivered articles of impeachment against President Trump to the Senate and approved seven Democrats to serve as prosecutors in the third trial of a U.S. president.

The managers then walked the articles across the Capitol and presented them to the chamber led by Majority Leader Mitch McConnell (R-KY).

The crux of the case is the allegation that Trump tried to leverage a White House meeting and military aid, sought by Ukraine to combat Russian military aggression, to pressure Ukrainian President Volodymyr Zelensky to launch an investigation of former vice president Joe Biden and his son Hunter Biden, as well as a probe of an unfounded theory that Kyiv conspired with Democrats to interfere in the 2016 presidential election.

After the House managers delivered the articles of impeachment, McConnell detailed the schedule for Thursday’s proceedings.

The House managers will return to the Senate at noon Thursday to exhibit the articles, McConnell said.

Then, at 2 p.m., Chief Justice John G. Roberts Jr. will be sworn in to preside over the trial and swear in the 100 senators to serve as jurors.

The White House signaled today that it doesn’t expect the Senate impeachment trial to last longer than two weeks, casting acquittal as a foregone conclusion and arguing that Trump’s team will present “a very strong case for the president.”

Asked whether Trump would go ahead with plans to deliver his State of the Union address Feb. 4 even if the impeachment trial hasn’t concluded by then, a senior administration official told reporters, “I think it’s extraordinarily unlikely that we’d be going beyond two weeks.”

The material includes voicemail messages Parnas received from Giuliani and Victoria Toensing, a prominent Trump-aligned lawyer, both of whom have been identified as players in an effort to force the removal of the then-U.S. ambassador to Ukraine, Marie Yovanovitch, in Spring.

The timing of the Toensing voicemail coincides with a flurry of activity involving Yovanovitch’s ouster. On April 23, Giuliani tweeted that Ukraine was investigating 2016 election interference, and Trump recalled Yovanovitch from Ukraine on April 24.

The previously undisclosed documents, released late Tuesday night but not publicly noticed, were posted ahead of the House formally sending its impeachment articles to the Senate, underscore the evolving nature of an investigation that House Democrats say is ongoing — and was stifled in its early stages by Trump’s refusal to allow his aides and associates to comply with congressional subpoenas.

Parnas was subpoenaed as part of the impeachment inquiry last year, but he initially refused to comply.

He was later arrested in October and indicted on campaign-finance charges.

A federal judge authorized Parnas earlier this month to begin turning over documents and other information to the House Intelligence Committee, which led the impeachment inquiry.

The documents also include several photos of Parnas with members of Trump’s family and his administration — including Donald Trump Jr., Ivanka Trump, Jared Kushner, and then-Attorney General Jeff Sessions — further highlighting Parnas’ ties and access to the president and members of his inner circle.

In one newly disclosed text exchange from May, just days before Yovanovitch’s removal, Parnas sent a smiling selfie to an official at the Trump-affiliated America First Action PAC in which he is wearing a flak jacket and suggests he’s going to a “meeting.”

Among the newly released documents is a text message from Giuliani to Parnas, in which the former New York City mayor says he wants Parnas to get a message to Ukrainian President Volodymyr Zelensky to “stop acting like a boy” and arrest a Ukrainian oligarch who was under investigation.

Other documents provided by Parnas, which were released yesterday, included evidence that Trump personally signed off on his former counsel’s request to represent Parnas and another indicted Giuliani associate, Igor Fruman.