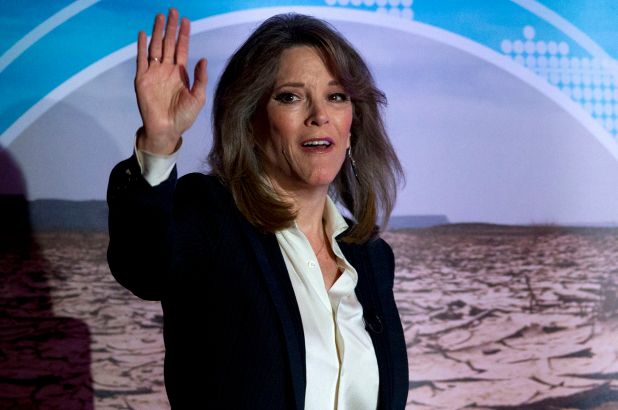 Marianne Williamson has exited the race for the 2020 Democratic presidential nomination, she announced today.

In a statement on her website, the author and “spiritual adviser” said she didn’t want her campaign to diminish the success of progressive candidates leading the polls in early states.

“I stayed in the race to take advantage of every possible effort to share our message,” she said. “With caucuses and primaries now about to begin, however, we will not be able to garner enough votes in the election to elevate our conversation any more than it is now. The primaries might be tightly contested among the top contenders, and I don’t want to get in the way of a progressive candidate winning any of them.”

In an early sign of what was to come, Williamson reportedly laid off her entire campaign staff at the start of the new year due to dwindling campaign cash.

The self-help author also failed to qualify for any subsequent primary debates after appearing in the first two.

“To the remaining Democratic candidates, I wish you all my best on the road ahead. It was an honor being among you,” Williamson said Friday. “Whichever one of you wins the nomination, I will be there with all my energy and in full support.”

Her large following (her books have sold more than 3 million copies, and she is close with several celebrities) was enough to separate her from a pack of literally hundreds of other non-politicians waging quixotic presidential campaigns, as she and tech entrepreneur Andrew Yang became the only two non-elected-officials to qualify for the first two debates.

But those debates required a polling threshold of only 1 percent and a donor threshold of only 65,000 unique contributors — relatively achievable goals. As the thresholds increased, Williamson was unable to keep pace and didn’t appear in any more debates.

She has languished with a national polling average of less than 1 percent all cycle long, and only one debate-qualifying pollster (Monmouth University) ever found her above 1 percent.

Maybe one reason why Williamson didn’t fare better in the polls is that the more voters got to know her, the less they liked her.

According to an average of polls conducted in May, Democrats were not very familiar with Williamson; 13 percent of them had a favorable impression of her, 10 percent had an unfavorable one and the remainder didn’t have an opinion.

This made her one of the few Democratic candidates who was more unpopular than popular among members of her own party — generally speaking, not a good place to be.

Williamson may have hoped that her New Age rhetoric (“I’m going to harness love for political purposes”) would help her appeal to the spiritual side of the Democratic Party, but it looks like it just turned voters off.

Democratic primary voters tend to be more highly educated than the broader public, which might disabuse them of a candidate who has heterodox views on vaccines and antidepressants or who ridiculed the idea that “wonkiness is going to deal with this dark psychic force of the collectivized hatred that this president is bringing up in this country.”

Ultimately, it was harder than Williamson probably expected to get, as she once quipped, “everyone who has a yoga mat” to vote for her.