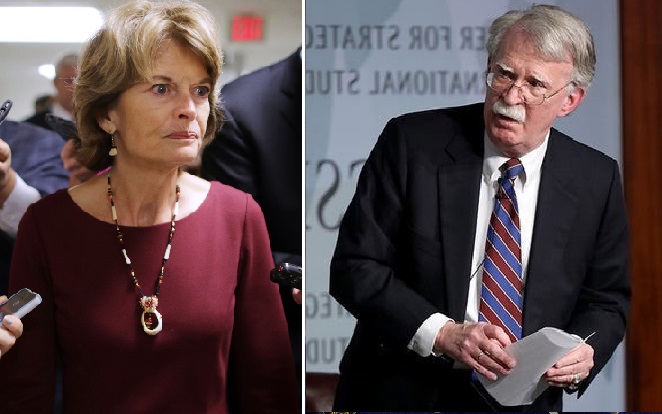 It was clear to Senate Republicans today after a morning meeting between Senate Majority Leader Mitch McConnell (R-Ky.) and Sen. Lisa Murkowski (R-Alaska) that the question of having additional witnesses is settled, and the Senate will vote Friday to wrap up the impeachment trial of President Trump.

There was no discussion of witnesses at a Senate GOP lunch meeting today, which was held a couple hours after McConnell and Murkowski met for about 20 to 30 minutes.

That was seen as a sign by several senators that Democrats will fail to convince four Republicans to join them in calling for witnesses.

Without a vote to hear from witnesses, the trial could end as soon as Friday.

Sen. Mike Braun (R-Ind.), emerging from the lunch, said, “I think I can say the mood is good.”

Braun expressed confidence that McConnell will be able to keep his conference unified enough to defeat a motion to consider subpoenas for additional witnesses and documents.

“We’ll be in a place where I think everyone is going to have their mind made up and I believe that we’ll be able to move to a verdict, and the witness question will be clear at that point,” Braun added.

Murkowski did not attend the lunch.

Sen. Mitt Romney (R-Utah), who has been the most outspoken advocate for calling additional witnesses, declined to comment as he left the lunch.

Romney and Sen. Susan Collins (R-Maine) are both expected to back witnesses.

Murkowski has been seen as a third possible vote, though she had not announced any decision.

Instead of discussing the possibility of having former national security adviser John Bolton appear as a witness in the trial at Wednesday’s meeting, lawmakers talked about voting Friday to move quickly to an up-or-down vote on two articles of impeachment.

“There was no discussion about that today,” Rounds said.

Instead, Rounds said the discussion was about how “we’re moving forward.”

A report by The New York Times that said Bolton in his forthcoming book writes that Trump had linked the withholding of aid to Ukraine to that country conducting investigations of former Vice President Joe Biden and his son Hunter Biden had given new energy to the witness debate.

Democrats have been clamoring to hear Bolton as a witness at the trial.