U.S. Sen. Bernie Sanders leads the Democratic field three weeks ahead of Caucus Day in Iowa — narrowly overtaking his closest competitors, who remain locked in a tight contest just behind him.

After a surge of enthusiasm that pushed Pete Buttigieg to the top of the field in November, the former South Bend, Indiana, mayor has faded, falling 9 percentage points to land behind both Sanders and U.S. Sen. Elizabeth Warren.

“There’s no denying that this is a good poll for Bernie Sanders. He leads, but it’s not an uncontested lead,” said pollster J. Ann Selzer, president of Selzer & Co., which conducted the poll. “He’s got a firmer grip on his supporters than the rest of his compatriots.”

Biden, Buttigieg, Sanders and Warren have remained clustered atop the Register’s Iowa Poll throughout the 2020 campaign cycle, though no one has definitively pulled away from the pack.

Instead, each of the top four has now led the Iowa Poll at some point this cycle as the field continues to shift.

The percentage of those who say their mind is made up about which candidate to support on caucus night has risen to 40% — up 10 percentage points from November.

But that leaves 45% who say they could still be persuaded to support someone else and another 13% who have not picked a favorite candidate yet.

“The caucus process is an invitation to keep an open mind,” Selzer said, noting that the Iowa Poll produced similar numbers of undecided caucusgoers at the same point during 2016’s crowded Republican primary.

Other Democratic candidates — including those banking on a late burst of momentum — failed to gain much ground in the January poll. U.S. Sens. Amy Klobuchar of Minnesota and Cory Booker of New Jersey both held steady: Klobuchar at 6% and Booker at 3%. Entrepreneur Andrew Yang grew his support from 3% in November to 5% today. 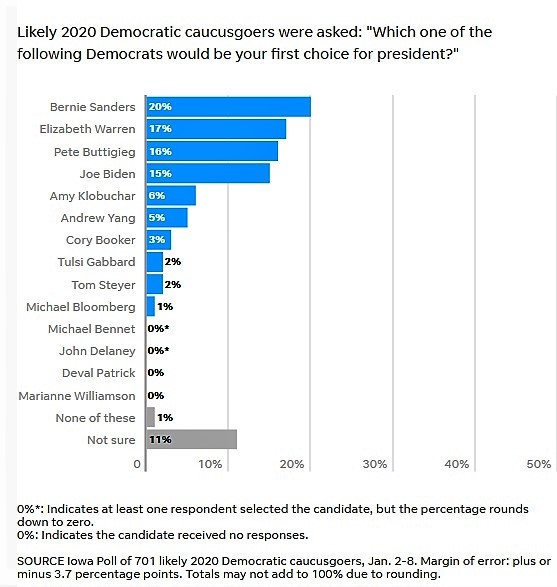 In the new poll, a slew of other contenders fell well below the 15% viability mark.

U.S. Rep. Tulsi Gabbard of Hawaii, who is focusing her attention on New Hampshire, and entrepreneur Tom Steyer are at 2%. Steyer is holding steady in Iowa but has gained enough ground in other early states to earn a place on Tuesday’s debate stage.

Former New York City Mayor Michael Bloomberg, who is skipping the four early-voting states and compensating for his late entry into the race by purchasing tens of millions of dollars’ worth of TV ads elsewhere, barely registers here. His support fell a percentage point from 2% to 1%.

Though Bennet has largely foregone competing in Iowa in the race’s closing weeks, Delaney — who was the first candidate to begin campaigning here in 2017 — has committed to a massive 40-stop RV tour of the state this month.

Massachusetts Gov. Deval Patrick and author Marianne Williamson, who ended her campaign after the poll was completed, were not named as a first choice for president by a single poll respondent.