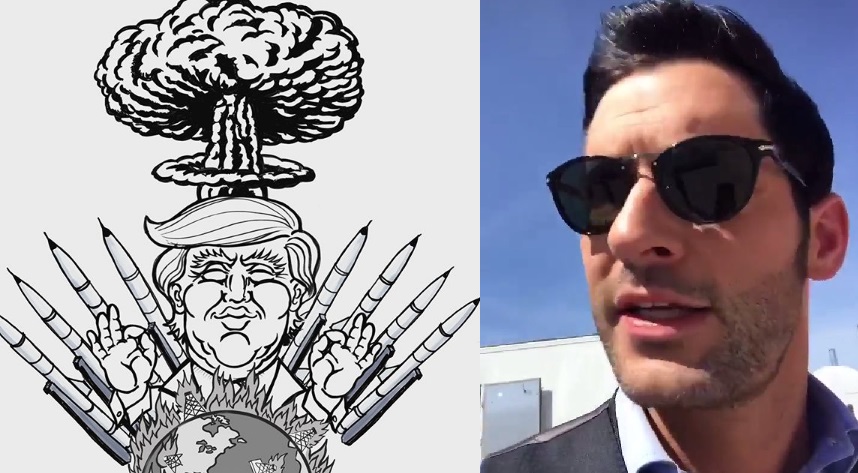 Tom Ellis has always been passionate about progressive political causes, and today he took another swipe at Donald Trump posting a cartoon on his Instagram account.

Cinematographer and director Nathan Hall drew the cartoon that he calls his “anger doodle.”

The drawing shows a happy Trump surrounded by nuclear weapons, the earth on fire, and a giant mushroom cloud above him.

“So far, so good!” is the Trump message on Twitter, regarding the current situation with Iran.

Ellis reposted the cartoon, saying it “is both hilarious and disturbing at the same time.”

The Lucifer star, who comes from a religious family, added: “I’m praying for the world right now. We can do so much better people.”

This cartoon by @ubermunky is both hilarious and disturbing at the same time…I’m praying for the world right now. We can do so much better people. 😈

It’s no secret Ellis loathes Trump, telling fans last year that the thought of meeting the 45th president would be his “personal hell.”

And that’s a pretty big statement coming from the devil.

A fan at the LUX convention in London last year asked Ellis: “What would be your personal hell?”

Without hesitation, Ellis thought of Trump and what he represents to the world.

“It would be opening the door to the White House at the moment wouldn’t it?,” Ellis told the laughing crowd. “Honestly at the moment it would be Donald Trump behind that door.”

After pointing out that Trump won’t be there forever, Tom added, “sorry to get political.”

A fan then yelled to the Lucifer star: “Promise to take care of him.”

Tom, answering in his devil voice responded: “Oh, I will.”

Then he added that one of his daughters finds Trump amusing in another way.

“My youngest daughter is six and thinks it’s absolutely hilarious that he’s named after a fart,” said Ellis to the laughing audience.

The verb “to trump” has been used extensively across Britain to refer to the breaking of wind.

When a big, disgusting, feculent blast of foul-smelling methane is emitted from someone’s rectum it’s called a trump.

Lucifans will also remember a favorite episode from 2016 when Lucifer went out of its way to condemn then President-elect Trump.

Episode 8, “Trip to Stabby Town,” witnessed Lucifer (Tom Ellis) in a session with his therapist Linda (Rachael Harris) who’s asking Satan a series of questions about hell and its occupants.

“How did you actually torture Hitler in Hell?” Linda asks. “I mean, is his cell next to Idi Amin’s? Or Mussolini’s? Or is there kind of a tyrant wing in Hell?”

“So, we can, You know, talk about Caligula, Stalin, Trump. I mean, I know he’s not dead, but he’s definitely going,” Lucifer says of 45th president.

Netflix plans to release the 16 episodes in two drops, the first later this spring.

On a non-political note, Ellis sent out greetings to fellow actor Dennis Haysbert, who will play God in the final season.

“We are thrilled to welcome the legend that is @dennishaysbert to the family,” wrote Tom, pointing out that Lucifer wasn’t as thrilled. “Cant wait for you all to see the big guy playing the big guy in Lucifer season 5.”

Well it’s official. We are Thrilled to welcome the legend that is @dennishaysbert to the family. (Well everyone apart from lucifer that is) Cant wait for you all to see the big guy playing the big guy in #Luciferseason5 #god @lucifernetflix